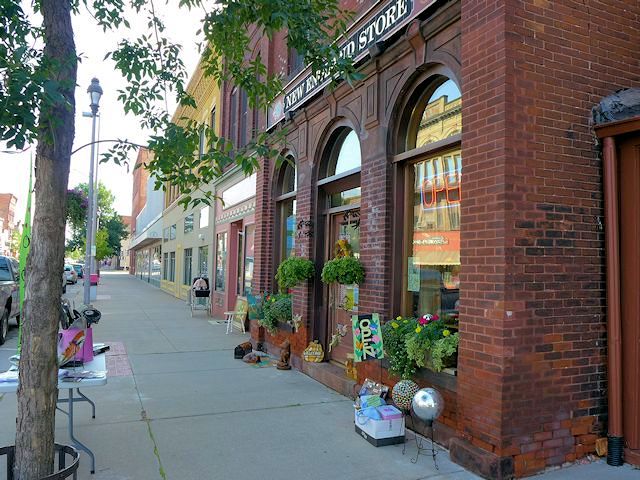 Whenever we drive through Oregon, Ashland Oregon is a convenient stopping spot. This pretty little city has streets lined with interesting boutiques and art galleries, and pretty B&Bs within walking distance of the town.

Ashland is also normally alive with the Sound of Music as street musicians are interspersed in the city’s main streets (although we noticed fewer street musicians on our 2022 trip than in the past).

The city’s primary draw, and the thing that allows a relatively small city to draw so many tourists, is the annual Oregon Shakespeare Festival. Throughout the season, dozens of plays are staged in each of the festival’s four theaters. HINT: Before you buy theater tickets, ask your B&B if they have access to discounted tickets.

If you have tickets for a play, or even if you don’t, early evening is a great time to stroll Main Street and the city square, browse through the shops and galleries, and listen to the wonderful street musicians.

We don’t always catch a play when were are in town. It depends on what is playing. On a past trip we went to a Idris Goodwin play, “The Way the Mountain Moved”. This play, staged in the Utah Territory in the mid-19th century just after the Mexican-American War, opened with a team of soldiers and scientists sent by the government to survey a potential route for the transcontinental railroad. The story consisted of the wanderings of the individual party members and the wide range of people they encountered along the way. These included a black Mormon couple, a women and daughter in search of their recently kidnapped son, a couple of potentially violent bandits, two mutes, a Mexican stranded in the new American territory, and of course, an assortment of Native Americans.

The story was about how a dispersed soldier and scientists ran into each other and how other disparate characters had to combine into unusual alliances to survive this inhospitable place. While the play generally held our interest throughout. However, we could never figure out the rationale behind the numerous disconcerting and contrived loud, high-pitched tones that pierced the theater throughout the play. It also ended with a seemingly artificial scene of two Native-American sisters pondering how the rapidly growing stream of entrants would alter their ways of lives and how they should respond. Like other reviewers, we left the theater unsatisfied with this world premiere. Maybe it will get better with some rewriting before it moves onto another venue.

Alchemy houses one of the most popular wine and cocktail bars in town. No surprise given its lovely two-level garden and its enormous selection of wines and spirits that are offered by the glass and its much larger, Oregon-centric list of wines by the bottle.

While we have had good meals here in the past, our summer 2022 was disappointing…very disappointing. So over the top disappointing that we doubt we will return.

While we try to minimize criticism of service during the post-pandemic labor shortage, Alchemy was slipshod at best. We ran into confusion over the time of our reservation, who are server was, the inability to explain dishes to us, long waits for one of our dishes, and a lack of follow-up after our dishes arrived. The one exception was the good server who delivered our cheese.

OK, service aside, we were also disappointed by the food. First, we made a mistake in assuming that cheeses from Oregon Cheese Cellars were from Oregon. When they were served, we learned that one was from Canada, one from Spain, and no one knew the origin of the third. Although all of the cheeses were fine, the portions were much smaller than we expected for the price.

We planned to share the main course of butter-sauteed scallops with yuzu hollandaise and crispy pancetta. When it finally arrived at our table, it was overcooked and oversalted. Rather than order a distant second choice main course, we ordered another starter, a steak tartare which we found to be fine, although again we were very disappointed by the time it took for the dish to arrive. The wine list was a bright spot, especially for the reasonably priced Oregon wines—a 2020 Shea Vineyard Yamhill-Carlton Pinot Noir.

What a shame as we had enjoyed our 2020 visit when we split two savory dishes that were reasonably tasty: broiled diver scallops with enoki mushrooms, ginger, and huckleberries; and a halibut fillet served with brown butter sauce, huckleberries, morel mushrooms, and nori powder. Our dessert was a decadent, brown butter shortbread tart with brown butter custard, vanilla ice cream, and seasonal huckleberries. Our wine was a very nice, full-bodied 2015 Bergstrom from Gregory Ranch in Willamette Valley’s Yamhill-Carlton District.

We split one appetizer, one entree, and one dessert:

While we enjoyed all three (while the ice cream was not as rich as we would have expected, the accompaniments complimented it beautifully). The standout, however, was the salmon–absolutely perfectly done (to 120 degrees) and again, perfectly complemented with the bacon and fresh local produce.

We enjoyed a Stoller Reserve Pinot Noir. Although it was a bit light and had a little more bright red fruit than we like, the wine was well balanced with a smooth finish.

Although we normally stay in a B&B in Ashland, we decided to stay at a hotel this time for several reasons. First, we had a carload of wine from our visit to the Willamette Valley. Due to the heat, we had to unload the car at night and reload it in the morning. The hotel’s elevator was a strong pull. Second, the description and reviews talked about it being a restored 1925 historic landmark. Third, it is right in downtown Ashland and had free parking.

The lobby was nicely restored. And although we arrived before check-in time, the friendly person behind the front desk was very helpful and very friendly.

Granted it is hard to renovate a historic property. Internal walls, plumbing, and electrical are difficult to change. But furnishings and electrical can be updated. Bathrooms can be modernized. Unfortunately, our room did not reflect any of this.

We had a small sitting room off of the bedroom with a couch and desk. A coffee machine was in a closet. One side of the king bed did not have any access to plugs. The bathroom was tired and in need of updating. Plus the bathroom door was in the middle of a small hallway and when open, blocked any traffic flow. Although breakfast was included, we left before it opened and can’t comment on it. We will go back to a B&B next time.

Bayberry Inn is a lovely bed and breakfast that is a short walk from the main Ashland town. Some people are born hosts, and Franchesca, the delightful owner, is one of them. She is more than happy to help you in any way. Homemade cookies and sherry are available along with coffee and tea in the sitting area. Full breakfast at 9. If you are bothered by street noise (we aren’t), you may not like the room we have as it is by the road. Just ask for a quieter room. Ashland was in the 90s when we were there but the AC kept up just fine. Franchesca sometimes has discounted tickets to some of the plays. Ask and you may be rewarded. But make your reservations early. We found that some of our fellow travelers book here year after year

Within a short walk from the town plaza, where one could find restaurants and theaters. It gives you an opportunity to walk a little, which we always like. This was like an old fashion bed and breakfast. Place filled with traditional style furniture and had flowered wallpaper on the walls. While the decorating was very old fashion, it was clean and the room had what we needed. The bed was too soft for our tastes. While we could regulate the room temperature, the lowest temperature was 70. We understand why, but the room was a little too warm for sleeping well. Breakfast was at 9. The common areas had a good selection of coffee and tea, red velvet cookies, and other little sweets. Bottom line, nothing really wrong with it, but we will try another place next time. My back will appreciate it.