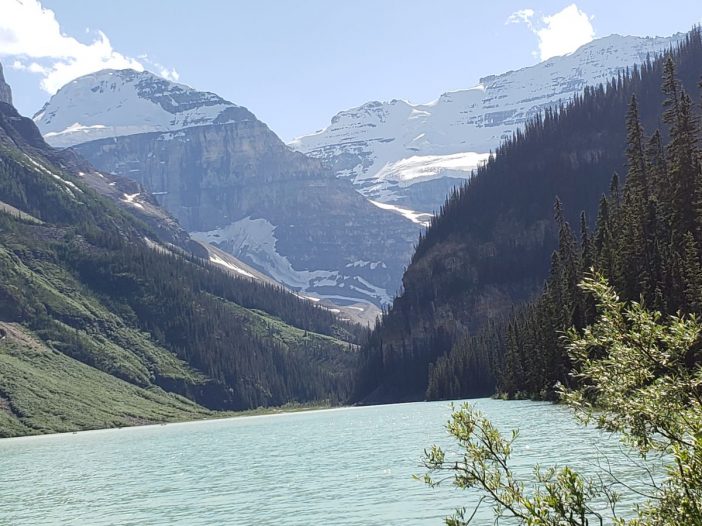 Lake Louise is in Alberta’s Banff National Park in the Canadian Rockies. The town is named for its eponymous, turquoise-colored glacial lake. The lake is surrounded by mountains, glaciers, and, at its head, the Fairmont Lake Louise hotel.

A glacier formed the valley 2 million years ago. Another glacier deepened it during the last ice age. That latter glacier’s terminal moraine created a dam that formed the lake. Today, the runoff from the Victoria Glacier continually feeds the stream and the lake. The glacier’s suspended glacial flour (tiny rock particles that glaciers carve from the surrounding mountains) gives the lake its beautiful greenish-blue color. You can enjoy the view from the front porch of the hotel or from a trail that is accessible from the hotel.

Nearby is the equally stunning Moraine Lake. It can be viewed from the base or from a 7-mile in-and-back hike.

Hiking in the Lake Louise Area

We explored the trails around both of these lakes:

Lake Louise’s flat, 2.5-mile (out and back) Lake Shore Trail connects to the more challenging Plain of Six Glaciers trail. That 3.5-mile (out and back) trail takes you straight up the valley (with views of the Lake Louise Fairmont from much of the trail) to our destination of the Plain of Six Glaciers Tea house (where you can grab a snack when it is open). The gradual but consistent 1,850-foot assent (with a few shallow stream crossings) gets to the teahouse, with views of steep, scenic cliffs and several glaciers.

Moraine Lake Lakeside Trail is a 1.7-mile out-and-back evening stroll along the lakeshore.  Although the lake itself may be somewhat less impressive than Lake Louise, it makes up for it with its $1 million background of high peaks and their reflection in the water.

Consolation Lake sounded like an ideal, easy morning hike. The 4.8-mile round trip with only 220-foot elevation gain goes to what is supposed to be a fantastic view of cliffs over Morraine Lake. While the hike began easily enough, we soon discovered that it required scrambling over jagged rocks of a scree field formed from the remnants of a terminal moraine. In between the rocks was water. Slips risked not only injury but also a day of soaked feet from dips in the ankle-deep water. Although we would have been fine with hiking poles, without them, we didn’t feel comfortable. So we resorted to what we planned as a short extension to the Consolation Lake Trail. Lesson learned: bring hiking poles.

Moraine Rockpile Trail is a 0.7-mile spur off the Consolation Lake Trail that climbs 82 feet of steps to the top of the moraine. It offers spectacular views over the turquoise lake to at least seven dramatic peaks on the south end of the lake and at the north end, the remnants of an annual winter logjam of tree trunks that fell into the lake over the winter and jammed up at the head of Moraine Creek. Certainly not an equivalent to our planned jaunt, but it is an easy, short, and rewarding walk.

Although two of our three preferred restaurants (Fariview and Walliser Strube at the Fairmont) were open only to hotel guests during our visit, we made do with those that were open and were the most highly recommended.

Post Fondue Strubli at the Post Hotel supplied us with a blowout, four-course fondue meal that was far more than we are capable of eating. It began with a plate of six charcuteries followed by a choice of appetizers. We tried to compensate for an incredibly rich plate of spätzle smothered in cheese sauce with a healthy butter lettuce salad. Ha. Next came a huge pot of fondue—a choice of cheese, beef, or chinois (we chose cheese). And as if this weren’t enough, it followed with a choice of desserts. We selected a salted caramel ice cream bar with Bailey’s mouse and caramel popcorn and a pecan tart with blueberry compote and bourbon pecan ice cream. All were delicious. The least fattening, artery-clogging item we had was a wonderful bottle of 2018 Grosser Gewach “Kiedrich Graffenberg Troken Riesling.  Overall, the meal was very filling and very expensive. But it was delicious and with the type of service that one expects from a Relais & Chateau establishment.

Mount Fairview Dining Room at Deer Lodge was where we had two dishes. Bison Bolognese with Paccheri pasta wilted kale, and tomato demi was good and loaded with bison although Joyce would have preferred more sauce. Tom’s ribeye, was understandably thin given the price ($37 Canadian). It was a bit tough but tasty with less than compelling sides of black garlic mashed potato, roasted heirloom carrots, and green peppercorn cream sauce. We originally ordered a 2006 Keenen Mailbox Vineyard Merlot But whether it was too old or incorrectly stored, the wine had seeped through the cork. It tasted dusty and the fruit had been totally lost. We replaced it with a pleasant 2017 Produttori Barbaresco.

Bill Peyto’s Café is a rustic spot where we shared a tasty elkburger with cheddar and sweet potato fries for lunch. Less impressive, but still pretty good was the Alberta beef chili with vegetables, bacon, sour cream cheddar, and green onions (we would have preferred more beef and fewer vegetables).

Based upon reviews, we stayed at the Paradise Lodge & Bungalows. The draw was its location at a 20-minute walk to Lake Louise, which normally runs out of parking. But in the end, it didn’t matter as buses went to Lake Louise and we were also able to find parking when we drove there. Our room was right on the road. While it didn’t bother us, if car noise bothers you, book a room in the back. The staff was very helpful. The room was comfortable and large with a kitchen/living room separate from the bedroom. Not luxurious but it had what you needed. The room did not have a lot of outlets and only one side of the bed had a table and plugs. But we were surprised to find the room had bathrobes. Oatmeal and granola bars were available. The room also had the standard microwave and coffee/tea supplies.