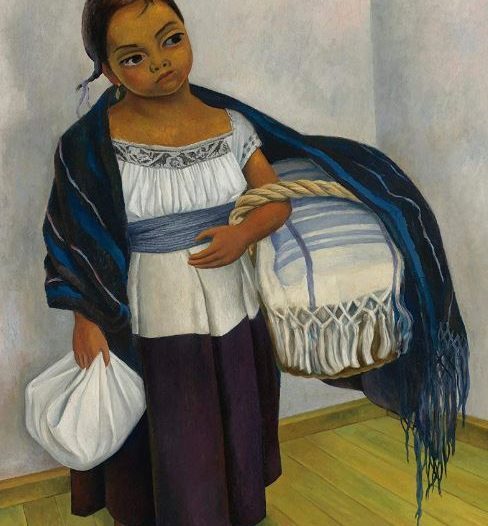 Diego Rivera is a famed early 20th-century muralist. The San Francisco Museum of Modern Art is currently exhibiting over 150 of his paintings, frescoes, and drawings that highlight his work from the 1920s to the 1940s when he was conceiving a new vision for North America.

Diego Rivera began his artistic career in Mexico but completed his studies in France. He returned to Mexico in 1921 where he produced murals that commemorated the Mexican revolution (especially his 1922 mural ”The Creation”). Since the murals can’t be exhbited in person, they were projected onto walls and often included people walking in front and around them. For example 2 musicians were seated in front of The Creation, playing instruments.

During this time, he also created the rural, indigenous populations.

Rivera in the United States

In the 1930s, he traveled to the United States, especially San Francisco, followed by Detroit and New York. He left examples of his modernist figurative-style murals in each location. In San Francisco, for example, he left three murals including Allegory for California for the San Francisco Stock Exchange; a private commission of Blossoming Almond Trees; and his masterpiece, the massive Pan-American Unity (see below) that celebrates the history and increasingly integrated future of the U.S. and Mexico.

The Influence of Communism

Rivera was greatly influenced by communism and became a member of the party. Many of his paintings and murals reflect the nobility of the working class such as his 1928 painting of The Embroiderer and his 1935 The Flower Carrier. He rendered these subjects as simplified figures and outlined their shapes and painted them in earthy-colors.

The exhibit continues with his representation of traditional Mexican life and family life, especially mothers and children.

It progresses though his paintings and murals of industrial life and skyscrapers and studies for his infamous Rockefeller Center mural which the Rockefellers destroyed due to its celebration of Lenin and Communism. Then it moves to some of his experimental works, including a couple of surrealist images and drawings of sets and some of his costumes for the early 1930s modernist ballet, “Horsepower”.

The exhibit ends with his Pan-American Unity masterpiece. A gallery provided detailed sketches that he made in preparation for creating the piece. Then, in public view from the street, it showcased the recently renovated, full sized (74-22-foot) 1940 masterpiece, Pan-American Unity which now resides at the museum. Rivera painted the piece live at San Francisco’ 1940 Pan-American Exposition. It depicts the past, present, and future of the Americas (especially the U.S. and Mexico) through images of transformational people from Simon Bolivar to Samuel Morse. Thankfully the museum provides chairs to let you set before it while you gaze at this amazing work of art.