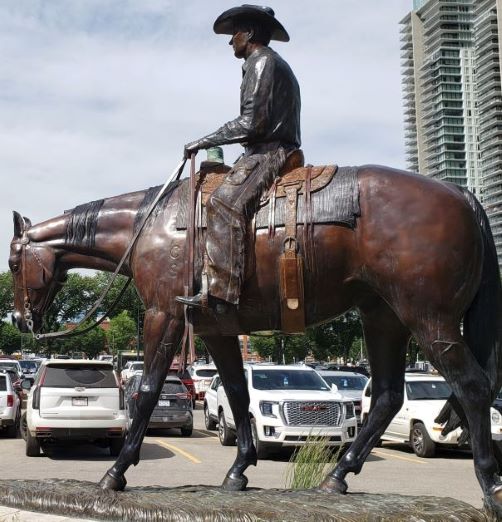 Calgary Canada today is a sophisticated Alberta city with numerous modern buildings. But it wasn’t always that way. It was first settled more than 10,000 years ago. It began attracting European trappers, buffalo hunters, and fur and whiskey traders in the mid-19th century. The Northwest Mounted Police Force (since renamed the Canadian Royal Mounted Police) began to bring order to the region in 1875. A treaty with the Blackfeet Indians followed a few years after.

This led to the development of a tranquil ranching and meatpacking community that began to grow with the 1883 arrival of the railroad which connected the region to the Eastern Canadian market. The city’s growth exploded in the 1910s and especially in the 1940s with the discovery of large oil deposits. This, in turn, led to the development and an infusion of money and people into a modern city that is now home to more than a million people.

Although the city has a number of historical, cultural, educational, and recreational opportunities, we limited our urban exploration to a several-block area around the Stephens Avenue Walk. This pedestrian (at least from 6:00 AM to 6:00 PM) street is lined with public art and stores and restaurants housed in renovated late 19th– and early 20th-century buildings.

Nearby is the neighboring, 626-foot Calgary Tower. These and dozens of other downtown buildings are connected through a network of elevated, enclosed walkways that make it much easier to brave the frigid winter temperatures and snowstorms.

We timed our Calgary visit to hit the city’s largest festival: the annual Calgary Stampede. The event celebrates and commemorates the city’s wild west heritage with a 10-day party that attracts more than 1 million people per year.

The Stampede is something of a combination between a state fair and a Wild West show that includes agricultural exhibits, a midway, food stands, fireworks, and parades. It has popular western-themed events such as rodeos, barrel racing, horse-pull competitions and rollicking nightly chuckwagon races.

The agricultural exhibits had lots of horses (including miniature horses), sheep, goats, and pigs. An exhibit had a 500-lb sow feeding its half-dozen-or-so piglets, whose weights are tracked daily.

Then there were the entertainment venues. We sampled the performances at several of the venue’s concert stages. We especially enjoyed the two country-themed shows at the Nashville North venue and browsed through art and First Nation exhibits. Other entertainment events were watching calf herding and calf roping rodeo.

As nighttime fell, we moved on to the Stampede’s evening show. This four-hour, multi-event show consists of several events and performances:

Chuckwagon races were the purported highlight of the evening. Teams of four horses pull bare-bone chuck wagons through a figure-eight course before circling the track. Those teams that have the lowest times through nine races (some of which can be decided by a quarter of a second) then race in the finals on the show’s tenth and final evening. While the first couple of runs were interesting, we soon tired of watching them.

Then came trick riding. Riders stand atop their mounts, riding alongside the animal’s haunches, jumping from horse to horse.

Then came a short, seamlessly choreographed transformation of the track into a high-tech performance stage. A large stage was towed onto the track’s apron as the sky began to darken. This set the stage for the entertainment for the rest of the evening.

It began with a headlining concert by a country singer who we didn’t know and did not have any interest in learning more about.

Next came a 45-60 minute performance that demonstrated both the scale and the scope of the show. At some point, about 80 singers, musicians, dancers, and entertainers were on stage at a time. The popular music-scripted performance included solo singers, dancers, and a lasso artist who amazed the crowd with a virtuoso performance. As the sky darkened further, his performance culminated in dancing through a series of flaming lassos. The high-tech stage, meanwhile, proved to be another of the show’s highlights with its continually changing light shows and background lighting, intermittent bursts of flames, and water effects.

At 11:00, the show continued with an impressive, 11:00 fireworks display during which the music, light show, and some performances continued.

By the time we exited the outdoor venue at about 11:30, we expected Stampede Park to be virtually shut down and empty. We were wrong. Some of the concerts continued with capacity crowds, the stands remained open. The crowds were virtually the same size as in the early evening.

Overall, it, like many of our travel experiences, was something that we were very glad to have done and may well do again if in town in early July. But we don’t have a need to rush back.

Embarcadero Wine & Oyster Bar. We began with two dozen Bay Sound British Columbia oysters that were creamy and nicely textured with a bit of brine. At $1.00 Canadian each, they were a great bargain. We added a bottle of crisp, minerally, 2018 Domaine Laroche “Les Vaudevey” Chablis 1er Cru. From there we shared three non-descript small plates: sautéed Black Tiger prawns with white wine garlic butter, herbs, and parmesan; sautéed bacon-wrapped scallops with balsamic port reduction and maple drizzle; and a small, sausage flatbread with onion, mushroom, Danish blue cheese, and asiago.