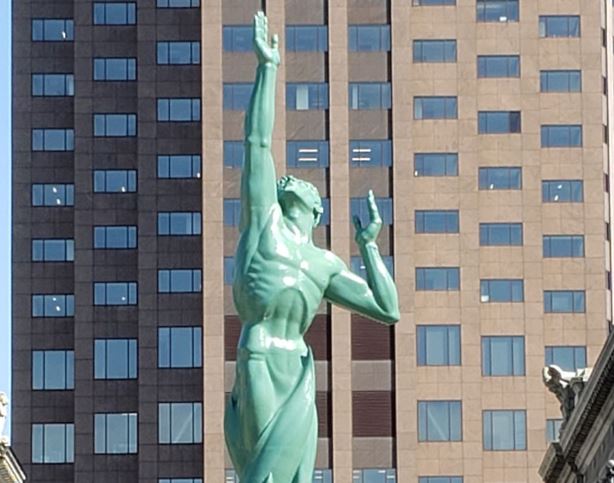 The City Whose River Caught Fire

Cleveland Ohio was initially established in 1796. It remained a relatively sleepy community until the 1832 completion of the Ohio and Erie Canal which terminated there. Within five years of the Canal’s completion, the population had grown tenfold, largely by a surge in immigrants. This transformed the small port into a major shipping and industrial city. It became one of the largest oil (John D. Rockefeller’s Standard Oil), auto, iron, and steel producers in the country.

This also made Cleveland one of the country’s most crime-ridden and polluted cities. Its pollution and lack of environmental controls were poignantly evidenced on June 22, 1969, when the Cuyahoga River (actually it was an oil spill on the river) caught fire. The fire and similar events turned the city into a national joke and a symbol of the nation’s pollution problem. But it also helped spur the city to action.

Today, Cleveland is a very different city. On our 2022 visit, we found a much more pleasant city than we had expected. Its downtown was clean, modern, and pretty. And from what we saw, its neighborhoods looked very pleasant and welcoming. These include some, like the waterfront (at least near downtown) and the warehouse district, that were directly impacted by the city’s industrial past. For example:

Our primary focus for our visit to Cleveland, however, was to explore the Rock and Roll Hall of Fame.

Rock and Roll Hall of Fame

The Rock and Roll Hall of Fame is an I.M. Pei building that houses the nation’s largest permanent (and hosts many temporary) collections of rock and roll memorabilia. Most of the exhibits are organized around themes including the precedents of Rock and Roll, the cities that became incubators for Rock music and the artists who had the greatest impact on the genre.

We started our tour at the Roots of Rock exhibit which uses a video, supported by panels to discuss specific artists and displays of memorabilia. It used voice and clips of songs from key artists of each genre to explain the influence of each type of sound on rock and roll.

Protests Against Rock and Roll

Rock was not embraced by everyone initially. Educational panels and film clips portrayed the many condemnations of the music. Music critics, religious zealots, political figures, the police, and others charged that rock included satanic influences, public lewdness, drugs, and had a negative impact on children. They used public taunting, record burnings, U.S. Senate hearings, and police harassment to try to bring down rock.

All Rock Is Not the Same

Other exhibits gave overviews of the creative milieu that developed in different cities at different times to take rock into new directions. Each exhibit combined informative panels with memorabilia, music, and especially video clips. These included a number of cities and regions that became magnets for talented musicians. Example include:

Other exhibits focused on specific artists, especially those who had particularly large impacts on rock.

Elvis combined Blues, Gospel, and Soul into a new form of music that effectively launched Rock and Roll. The extensive exhibit played extensive clips of his performances and movies, discussed his increasingly troubled personal life, and attempted to explain how a combination of his music, hip-swiveling performances, the soul that he put into his songs, and his personal attributes (modestly, charisma, etc.) made him such a breakthrough star.

The Beatles had another very large section that was based on the 1970 Michael Lindsay-Hogg documentary, “Let it Be” and the 2021 Peter Jackson “Get Back” docu-series (which was compiled from footage shot, but not used by Lindsay-Hogg to tell a very different story). In addition to performances from these and other sources, the exhibit discusses the creation and role of Apple Studios and particularly important contributors to the Beatles’ success. These include George Martin (their manager sometimes referred to as the Fifth Beatle), Glynis John (who worked for the Stones, but on special request from Paul McCartney, helped produce some of the Beatles’ own movies), and long-time friend and collaborator Billy Preston.

Exhibits include some of their instruments, outfits, stories about specific songs (including Lucy in the Sky of Diamonds, which Lennon insisted came from a drawing his son created in school and had zero reference to LSD), and memorabilia such as Lennon’s glasses and driver’s license.

It also reviewed some of their incredible accomplishments:

It also explained the evolution of the art, from the kiddie tunes of the early 60s, through the innovative Sergeant Pepper, through their soulful Rubber Soul and their continual experimentation with new instruments 9especially the sitar) and production techniques.

The Rolling Stones explained the history of the band. The exhibit played numerous clips of their blockbuster concerts, and showed Jager’s outrageous outfits and incomparably athletic prancing (including well into his 60s) that made the Stones the “greatest touring band of all time”.

Jimmy Hendrix started as an Army paratrooper before becoming a contract guitar player for recording artists. He later created his own group before his tragically premature drug-induced death.

We were surprised by no mention to why Bob Dylan was not included in august group, much less getting barely a passing mention in another exhibit, the Legends of Rock.

Other smaller tributes are paid to dozens of other artists.

The section also had brief profiles of a few Rap and Hip-Hop performers.

The Legends of Rock Section

This section included brief profiles of, not to speak of impressive memorabilia from many other star musicians including Tina Turner, Michael Jackson, Stevie Nicks, Kurt Kobian, Jon Bon Jovi, Ian Anderson, Taylor Swift, and many others.

Among other sections and performances are:

A Special Exhibit highlighted the digital art of Rock and Roll Legend Jerry Garcia (leader of the cult band, the Grateful Dead. Garcia, it seemed, was a born artist who when to art School (San Francisco Academy of Art) before becoming a musician. After his incredible music career, he refocused on his art, this time using new digital tools with which he creates accomplished figurative drawings in addition to the more psychedelic abstractions that you would expect from Garcia.

The museum also has you covered for lunch with a snack bar for sandwiches and three food and beverage trucks that specialize in barbeque and local craft beers.