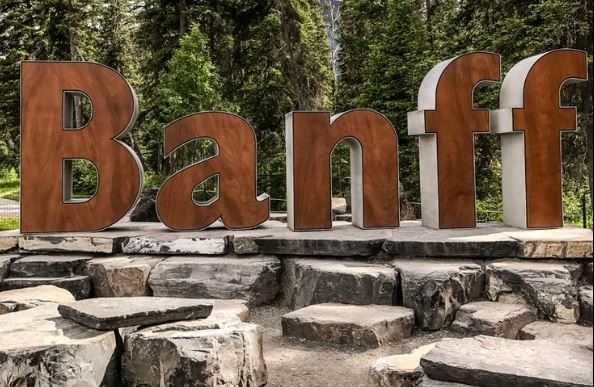 Banff in Alberta Canada is a “tourist town”. But we use the term in a good way even though it was originally created as a tourist town. In 1888, the Canadian Pacific Railway built the Banff Springs Hotel to attract wealthy tourists to the area’s scenery and wildlife. Today Banff is the largest town in this area of the Rockies. It is also home to most of the region’s hotels, restaurants, and shops.

The current town is attractive with wide, well-laid-out streets and sidewalks, attractive buildings, and a pedestrian-friendly main street that is aligned with a head-on view of the striking, 9,700-foot Mount Rundle. The main stretches of Banff Avenue and Caribou Streets are lined with shops, restaurants, and al fresco dining areas. It is surrounded by a wide range of hiking, skiing, horseback riding, and fishing spots.

We took a few of the area’s shorter hikes and sampled as many of its restaurants as time allowed.

Stoney Lookout via Upper Stoney Loop is a 3.2-mile loop trail with an elevation gain for 820 feet. It takes you to two lookouts with views of Bow Valley and Mount Rundle. While the uphill portion is a number of moderate uphill climbs separated by flat stretches, the downhill loop is almost steadily downhill with some sections that are quite steep. The entire loop is through a forest in which some of the lower elevation areas are draped in moss. Mosquitos were omnipresent at least during our mid-July visit. A short distance from the trailhead is a turnout that provides beautiful views over the valley and the town.

Tunnel Mountain Summit is a 3.0-mile out-and-back round-trip trail with an elevation gain of about 850 feet. It begins with several, short, steep, intimidating switchbacks which mercifully became less steep as we continued. The good news is that every switchback produced a better view of Bow Valley, the town, and the mountains that surrounded it. The rocky summit provided the best views of all.

Sundance Canyon is a 5-mile round trip that is mostly along a relatively flat paved trail. It has a steeper, unpaved section that goes into the canyon and to the top of the falls. Although we turned around at the falls, the trail continues for another mile as a loop. Most of the trail that we took was in a (which was filled with hungry mosquitos). The portions that ran alongside the slow-flowing turquoise river were lovely, especially those sections that provided views to Mount Rundle and other dramatic mountains. The highlights, however, were the falls, both from the lower, and especially from the upper bridge.

The Cave and Basin National Historic Site, located at the entrance to the canyon, marks the formation of Park Canada. Exhibits, films, and guided tours trace the history of the site and of Park Canada. The highlight of the historical park is a lovely, 1914 stone structure that housed a Bathing Pavilion built above thermal springs that flow in through a cave and out through a nearby meadow. A separate exhibit explains how Canada used WWI POWs and Enemy Aliens (especially recent migrants from Germany and Austria).

Bow Falls Trail is one of a pair of trails that run along the banks of the Bow River. It is along the south bank and its companion Bow River Trail along the north. We found the ¾-mile Bow Falls Trail to be particularly interesting. We entered the trail from the Banff Springs Hotel Golf Club, which is just below Bow Falls. We proceeded upriver alongside the rapids and further on, along relatively tranquil fast-flowing water. But while the water to your right, except for a few intimidating stairways you are walking through a pretty narrow band of pine forest with a few of the more than 30 public art pieces in various public areas.

Bow River Trail to Surprise Corner. The Bow River Trail, on the north shore of the river, follows a narrow, naturally-landscaped strip of land between homes and the river that also houses a couple of public art pieces. The trail often runs 20 to 40 feet above the river and views are scattered among the trees. Then you climb a staircase to a road with no indication of whether the park ends or where to go. But, by walking a couple of tents of a mile alongside the highway to the top of a crest, you reach Surprise Corner which has a viewpoint over the river valley to the Fairmont Banff Springs Hotel. A much steeper, much less maintained trail takes you down to Bow Falls, which can be more easily and more closely seen from the Falls Trail. Certainly worth a stroll, but not as a substitute for the Bow Falls Trail.

Fairmont Banff Springs Hotel is a huge, 750-room limestone chateau-style resort (with a staff of 1,200) that is understatedly decorated with Alpine-style furnishings. It has several restaurants, a golf course, and right next door, Bow Falls. (Note: if you’re walking between town and the resort, do yourself a favor. Walk by way of Bow Falls Trail one way and Bow River trail the other. It is much more interesting, thrilling, and tranquil (spread over a ¾-mile span) than walking along the street.  The current stone structure, which replaced a wooden structure that was destroyed in a 1926 fire, is the grandest of the town’s many rustic-style hotels.

Cascade of Time Gardens is a large 1935 estate (now the administrative office of Parks Canada) just across the river from downtown Banff. It has dozens of acres of landscaped terraced gardens, flower beds, stone pathways, and gazebos that are open to the public all year.

Vermillion Lakes, a network of marshlands and lakes in the shadows of Mount Rundle and Sulpher Mountain. It has wildlife, a 1.2-mile trail, canoe, kayak and paddleboat rentals.

Hoodoo Lookout, a view that we had seen a number of times before but, after just returning from two days hiking through “real” hoodoos at Utah’s Bryce Canyon National Park, we barely recognized the erosion on the side of Banff’s cliff faces as hoodoos. More like baby hoodoos which may grow into the real thing in another 10,000 or so years.

Waldhaus is an Alpine-style restaurant at the Banff Springs Hotel. Our dinner in the golf course’s clubhouse began with a soft German pretzel with mustard, apple-blackberry relish, and butter. We then moved into two entrees:

We had a bottle of J. Baumer Riesling with the fondue and a glass of on-descript French Pinot Noir with the veal chop. As if this weren’t enough, we had to finish off with a chocolate fondue with bananas, apples, and a selection of berries, cakes, and of course, double-chocolate chocolate chip brownies for dipping into the fondue. Unfortunately, our waitperson brought 2 servings of dessert, which was too much for us. But we tried to make the best of it. While we had some qualms with the service, we would return.

Joyce had a tasty bison ragu with gnocchi and cheese curds. Tom stayed with a bison ribeye with red wine sauce, roasted carrots and beets, and chimichurri. Our wine was a right-bank blend from the Okanagan Valley; a pleasant 2018 Osoyoos Larose “Le Petrale”. We decided to linger for after-dinner drinks from the Okanagan Valley; a Wild Geese Riesling and a 14-year-old Glen Benton single malt scotch.

Our dinner at the Banff Park Lodge began at the bar with two Canadian wines by the glass. The Mt. Boucherie Okanagan Valley Pinot Noir was disappointing. However, the Henry of Pelham Riesling from the Niagara Escarpment was quite nice. Moving on to dinner, the steamed mussels with nduja pork salami, marinara sauce, garlic, and garlic bread were OK, Unfortunately, the new chef couldn’t seem to properly cook the ½ rack of lamb (Dijon mustard-coated with herb and breadcrumb, polenta and tapenade jus. Although ordered medium rare, it first came out medium well. The replacement came out raw an hour later. Our wait person didn’t provide an explanation for the inexcusable hour delay between the time we returned the lamb and the replacement arrived. We decided that sending back the meat a third time was futile so Tom ate the raw chewy (but tasty) lamb. We were given a complementary dessert, an undistinguished crème brulee. Fortunately, the 2015 Heritage Grenache-Syrah blend from Ogier in the Rhone Valley to accompany our dinner was very nice.

Our shared al fresco lunch was very good. It was a B.C. salmon fillet with shrimp, broccolini, and herbed roasted potatoes with maple Dijon glaze.

We had a nice lunch here. Tom enjoyed his achiote shrimp tacos with grilled pineapple and lime crema. Joyce’s tasty bison/beef burger with smoked bacon had a surprisingly (at least to us) good combination with blueberry aioli. Tom enjoyed a Trash Ponds Hazy IPA. We returned another evening for a shot of their silky smooth vanilla vodka.