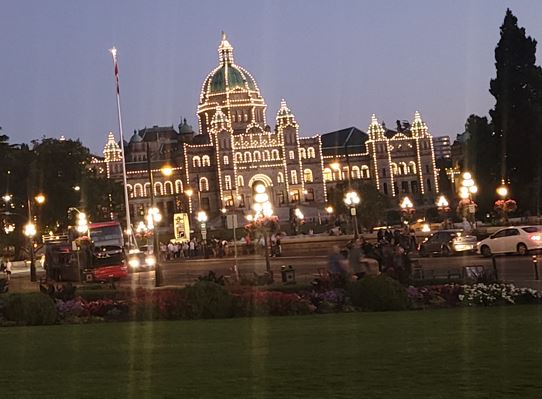 Victoria British Columbia may be formally part of Canada, but it appears more to be a British city. It has double-decker buses, horse-drawn carriages, tea rooms, a huge, formal, ivy-draped hotel (The Empress), parliament buildings, and flower-lined streets with china, crystal, woolen, and Irish linen shops. And it does all this while retaining totems and other emblems of its native culture.

The city is very lovely, although a little too sleepy for our tastes. However, we did explore and enjoy several areas.

The Inner Harbor around which the city was built, is lined with stone walls that overlook the marina and its boats and provides views of the huge, impressive, Parliament and Empress Hotel buildings.

Government Street (parts of which are pedestrian-only) and neighboring commercial streets that are lined with stores, galleries, and restaurants with several very British flairs including Victorian-style streetlamps with flower pots hanging from them. Shops that specialize in British goods and pubs that appear more traditionally and ornately British than most we have seen in England (especially Bard & Banker). Bastion Square (just off Government street) is lined with bars and Johnson Street has several late 19th and early 20th-century buildings.

Legislative Assembly of British Columbia, the seat of the provincial parliament, has beautifully carved facades and 12 acres of statue-studded lawns and gardens.

Fairmont Empress Hotel, the primary city landmark since its 1908 opening, is the place for formal afternoon tea. We passed on the large, $90 per person tea with cucumber and watercress sandwiches, scones, jam, pastries, etc., in favor of a more traditional lunch. The lobby of the formal building is also home to a lovely, very non-traditional, multi-piece, cloud-like sculpture whose thousands of facets shimmer in the light.

Government House is the home of the Lieutenant Governor. it has 36 acres of lawn and formal and informal English country gardens, including a lovely rose garden. The estate also has a teahouse and a costume museum. The museum contains uniforms that commemorated the role of indigenous people in the World Wars and a special homage to Queen Elizabeth’s Platinum Jubilee.

Beacon Hill Park, a fun, nicely landscaped retreat with a wide range of children-friendly attractions and a lovely shore walk along ocean cliffs and driftwood-strewn beaches.

Royal BC Museum which explores the province’s natural and human histories and a large First Peoples gallery (much of which was unfortunately closed for renovation when we were in town).  Its grounds also house the island’s first schoolhouse, the 1852 log Helmcken House, a 62-bell carillon and a large collection of Northwest totem poles.

Miniature World, with its dozens of miniature dollhouses, recreated period rooms, dioramas and models of the Canadian Railway European, European castles and circuses (which we chose not to visit).

Christ Church Cathedral, a Gothic-style cathedral founded in 1856 with the current structure dating from 1986.

Chinatown’s Fan Tan Alley is entered on each side by passages that are less than four-feet wide (although it opens somewhat in the center). This made it ideal for housing opium dens, gambling parlors, and other illicit ventures in the late 19th and early 20th centuries. Today is primarily lined with shops that cater to tourists and the Chinese Canadian Museum.

Overall, our record with Victoria restaurants wasn’t very good. And to make the situation even worse, we didn’t find any place that offered ice wines by the glass. We, therefore, took matters into our own hands by giving ourselves a Canada farewell present: A bottle of 2019 Gehringer Brothers Riesling Ice Wine. A very nice going away gift indeed.