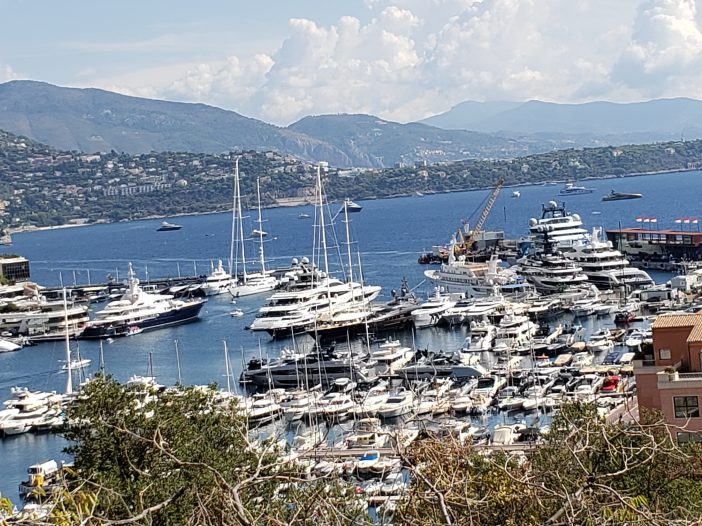 Monaco, a speck of a country of only 0.74 Square miles, is a land of fairytale princes and princesses. Here, glamourous tuxedo-clad men and gowned women venture off their mega-yachts to bet millions of dollars on a single roll of the dice at the luxurious casino. It is also one of the richest countries per capita and one of the few with no taxes.  And as if this weren’t enough, it is now engaged in a 2 million Euro project to build an even more exclusive enclave by further dredging a harbor from which the country was initially formed.

But it wasn’t always this way. Monaco was founded as a Greek settlement. The Romans took it over and then sold it to Genoa. Then Francesco Grimaldi, disguised as a monk, captured the area in 1297and created a dynasty that continues, through the present. In 1865 the country (the second smallest in Europe after Lichtenstein) created a casino (later named Monte Carlo) to raise money. Its success resulted in incredible growth, making Monte Carlo one of the priciest and most densely populated cities in the world.

We took a short 20-minute train ride from Nice to check out the sights of Monte Carlo.

The ornate, Beaux-Arts style Monte Carlo Casino draws gamblers and gawkers from all around. We had visited the casino on a previous visit. On this trip, we were barred from entering the casino floor as we had left our passports in our Nice hotel. While we wouldn’t have been able to gain admittance to the high-roller salons in any case, we would have strolled through, although not partaken in the action at the plebian tables. Oh well.

We consoled ourselves by checking out the lobby’s cloud-like sculptures suspended from the ceiling and also visible in mirrors.

The Prince’s Palace is on a high cliff that overlooks the Mediterranean Sea. To get there, we climbed a long stairway that offered beautiful views all the way up past the original city walls and watchtower to a plaza in front of the rather plain-looking palaces.

Although we passed on the changing of the guard ceremony, we explored the lavish interior via an audio tour. Of particular interest are the fresco-lined courtyard and colonnaded gallery, the Throne Room, the Royal Bedroom, and the Hall of Princes, especially for its abstracted, gold bust of Albert II.

Like Nice, Monaco has a wide walkway that runs alongside the large, yacht-filled harbor.

This lovely Baroque structure is attached to (and was designed by the same architect Charles Garnier who designed the Paris Opera) the Monaco Opera.

The grand, 5* hotel is located across from the casino. It is home to several popular, upscale restaurants including Cafe de Paris where we had lunch (see below).

Given its location on the edge of a steep cliff, parts of the garden were visible from the sidewalk even though it was closed for renovation when we were there. Very abbreviated views, but better than nothing. And this does not even consider the views over the edge of the cliff—to the town and harbor below.

Stopping here is especially notable for its trellis of old sneakers that have been recycled as planters. Although the Chateau is also home to a museum, we skipped that due to lack of interest in the temporary collection of works by “eccentric modernist” Christian Beyard.

As this was a day trip, we only had one meal: lunch at the Café de Paris. The large, ornate dining room is lined with marble sculptures and topped with a high arcaded roof with gilding and ornate painting. We had two nice dishes: salmon tartare with mango, avocado, and pomegranate seeds and roasted duck breast with peach sauce, spinach, roasted potatoes, and baked apples.