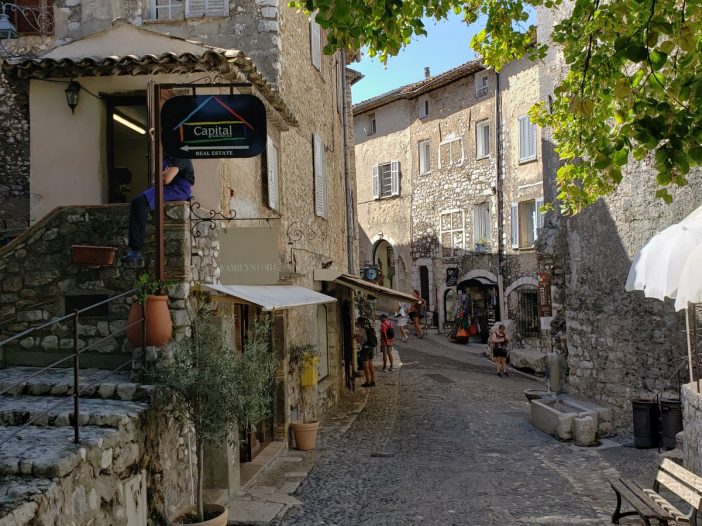 St-Paul-de-Vence is one of the most scenic and popular of France’s hill villages. It evolved from a 16th-century frontier outpost into a 20th– and 21st-century art center. The area is filled with galleries and studios. Also located here is the Foundation Maeght, one of the country’s largest and most important contemporary art museums. Here are some of the interesting sights.

Public art pieces are everywhere in St-Paul-de-Vence. Every roundabout and intersection approaching the town displays art. Public art also is interspersed within the restored medieval town too.

Then there is the highly restored medieval town itself. The ground floors of its 16th-century ramparts churches, fountains, and homes are typically occupied by galleries, boutiques, and cafes.  You enter the town via the tree-shaded Place de Jeu de Boules and then through the cannon-guarded entrance.

Rue Grande, the main street, is wall-to-wall with galleries offering all styles of art with price ranges of well over 10,000 Euros down to 10 Euros for individual pieces of jewelry.

One of the town’s several alleyways takes you to the local history museum (yes that is the name). It uses dioramas to show the city’s history. They dramatize the founding and fortification of the city and how it gained independence. Next, it shows the city’s role in the French revolution. Scenes show the decommissioning of the fortress in 1870 and the successful efforts to preserve the ramparts which were supposed to have been taken down and the stone sold.

Next door to the museum is the 17th-century Folon Chapel. It was renamed for the local artist Jean-Michel Folon who led the effort to renovate and redecorate the chapel with stained glass windows, murals, and sculptures in 2008.

Even the town’s cemetery is a tourist attraction. Devoted fans place offerings on the plain, unadorned grave of Marc Chagall. The entrance to the cemetery also provides access to the ramparts which provide views of the surrounding valley.

Artists including Picasso, Modigliani, Signac, Soutine, and Cocteau paid for their rooms and food with their local landscape paintings at this hotel. Guests can view these works. Unfortunately, it was off-limits to us as we were not guests. We even tried to get in to dine and see the art but the dining room too was available only to guests. If you do stay overnight here, be sure to check out the art.

This is such a pretty little village and it is fun just to wander the many pathways.

Although we wanted to visit the town for its own sake, we were particularly drawn here by Foundation Maeght. It was created in 1964 by Cannes art dealers whose collections formed the foundation of the museum’s collection. It rapidly grew into a destination.

A sculpture garden leads to the front entrance.

It has a courtyard filled with large Giacometti sculptures. a fabulous, multi-piece Miro-designed sculpture maze, a Braque-designed pool, a large Chagall mosaic, and a chapel displaying some of the area’s early Greek and Roman art.

Then there is the permanent collection with wall-sized Bonnard and Chagall paintings and a number of smaller Giacometti sculptures and several other paintings and sculptures.

The temporary exhibit during our visit was a retrospective abstraction (primarily French) from the post-WWII years through the 1970s. Titled “At the Heart of Abstraction”, it portrayed several dark, disturbing, experimental images that emerged from the horrors of the war. It explained how the war drove many artists to the U.S. (and New York in particular to form the Abstract Expressionist movement) and how those that stayed in or returned to Europe gravitated to Paris: and how these two artistic spheres evolved separately and fed into each other.

Separate galleries explored derivations of and experiments around early post-war movements such as the creation of highly geometric work (as with Mondrian and Calder), experimentation with new techniques (such as gesturalism) and alternate and everyday materials including concrete, sand, fabric (Tingley), used clothing (Scarpetta) and metal, as with Cesar’s car that had been compressed into a small cube.

By the mid-to-late ‘50s, many artists cut back to the essence, as with Marta Barre’s gestural paintings, while the ‘60s saw others (especially the Support/Surface group) questioning the need for painting altogether, creating bare frames and abstract designs using fragments of tree branches, wine bottles, and other found items. The ‘70s meanwhile, focused on digesting and refining the flood of experiments of the last few decades.

Although the city does have a number of what appear to be interesting, upscale restaurants, our time constraints led us to a quick meal at a crepe stand. We each got huge crepes (ham and cheese and chicken and cheese) that we couldn’t finish. We left wishing that we shared one savory crepe and saved our appetites for one of the compelling dessert crepes (chestnut, grand marnier, nutella, banana, etc.)