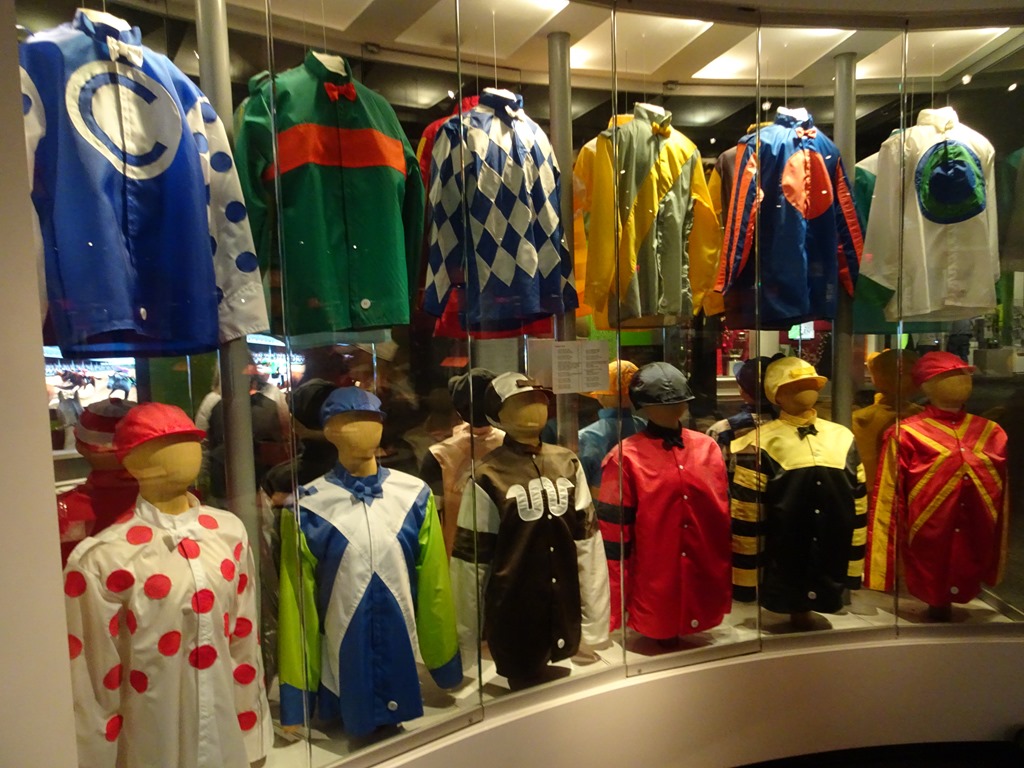 For many years we have heard about the Kentucky Derby. And every once in a while, Tom will even watch it on TV. But it was one thing we have never experienced in person. When Tom and Joyce’s brother David concocted a plan to go to the Kentucky Derby, Joyce immediately said “why would I want to do that”. Then after thinking about it, she realized that Tom would come back and say how wonderful it was and that she missed out on a new experience. So of course, Joyce reluctantly opted in to go with them.

In addition to the expensive tickets (scelpers buy the tickets and triple the price to nose-bleed pricing), you have to figure out what to wear. After all, you can’t show up in just anything. Hats are mandatory for women. And not just a hat. It has to be a Kentucky Derby hat (more on that later). And then the men need hats. And of course the clothes have to be appropriate. All of this for a horse race? Really? A horse race?

OK, so we did all of the prep, maxed out the credit cards, and got to Louisville. But before going to the derby, we made a stop at the Kentucky Derby Museum to get into the spirit.

The Kentucky Derby Museum is at Churchill Downs, which is the home to the Derby. We visited the museum 2 days before the derby so we were fortunate to be able to find a parking spot not too far away. The museum experience began with a 360-degree movie that vividly portrayed the experience and excitement of the Derby and got viewers in mood to learn more.

The galleries themselves began with, what for many Derby goers, is the real experience—a display of hats, dresses and suits. Then to exhibits about racing in general and the Derby in particular.

Each station in the museum, focused on a specific aspect of the race. The first floor focuses primarily on the Derby. It, for example, discusses the:

It also lists and briefly discusses each of the previous Derby winners, their jockeys, trainers, owners and their times and provides stations from which you can call up and watch any of the previous Derbies. And, for those who want to get into the act, there’s a booth, complete with instructions and prompts that allow you to call your own race. It also explains that while the Derby is intended and almost exclusively for three year-old colts (young male horses), fillies (young females) can run—and three have, in fact won. It is, however, generally thought that most fillies are unable to compete with colts. They, therefore, now have their own premier race—the Kentucky Oaks, which is run the day before the Derby and often draws crowds of approaching 100,000 fans. 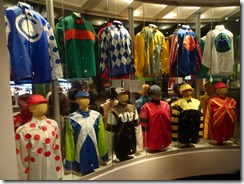 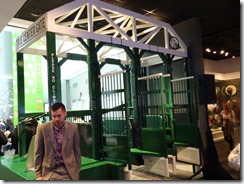 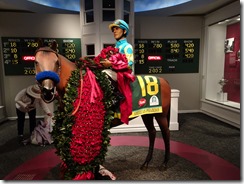 The second floor provides a more detailed discussion of the history of thoroughbred racing and traces the entire lifecycle of a racehorse. It explains the various categories of horses, such as fowls (newborns), fillies and colts (males and females up to 4 years of age), stallions and studs (adult males), sires (an adult male who fertilizes females), mares (adult females) and so forth. It then traces the entire lifecycle of a thoroughbred, from how the parents are selected (see below), to how they are birthed (front legs first) and how quickly they are able to stand and run (about three hours), through their racing years and their role in siring and birthing new generations of horses. (See our upcoming WinStar Farm post for a view and explanation of breeding, birth and life on a thoroughbred horse farm.)

The museum also explains the three primary factors that make a thoroughbred a champion. The combination of:

The display continues to detail the roles and responsibilities of the people that are critical to transforming a thoroughbred into a champion: the owner, the veterinarians, the grooms, the stable managers and so forth, and especially the:

The second floor of the museum also had a special exhibit on American Pharaoh and his successful quest for last year’s Triple Crown. And for those who believe they have jockey potential, there are opportunities for photo ops of you on a model horse in a cramped starting gate. 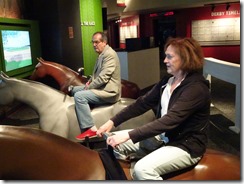 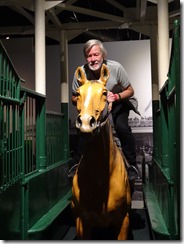 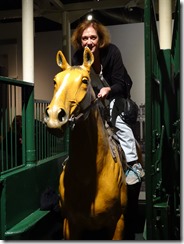 A Kentucky Derby Experience—And Their Off

But we were there for the main event: The Kentucky Derby. This is the longest-running sporting event in the country (dating from 1875), and is indeed an experience. We, like many other Derby goers, are not horse race enthusiasts. Tom has gone to “the track” a total of two times in his life before the Derby—both when he was still in school. (Joyce had been only once.) This being said, Tom (unlike Joyce) does watch the Derby on TV when it is convenient, and occasionally, one of the other Triple Crown races when there is a serious prospect for a Triple Crown Winner (as with American Pharaoh).

By the day of the Derby, we had learned of different park-and-ride options (we decided to park and take a bus from the Louisville Cardinals’ Papa John Stadium) and arrived at the iconic Churchill Downs about noon, after a relatively easy commute.

Although it was a full day with a slate of fourteen races, the Derby race itself was race 12th of 14. Since it was scheduled for 6:24, we had plenty of time to explore the paddocks, the Grandstand and the Clubhouse areas (to which our ticket provided entrance) but not to the Turf Club or to Millionaire’s Row, the true luxury experiences. It also gave us more than enough time to smoke cigars and all too many easy-drinking Mint Juleps (two shots of straight bourbon, crushed ice and a big sprig of mint). 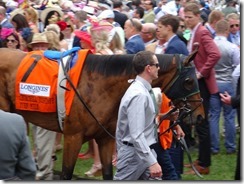 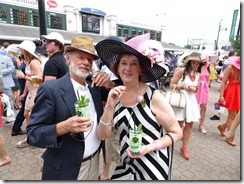 Although not especially impressed by the “General Admission” section of the infield or the bleacher seats of the Grandstand, we were relatively pleased with the padded folding seats and the somewhat cramped boxes of the Grandstand. We were particularly happy that we chose the third-level seats that provided an unobstructed view of all the people, the giant monitors, and well over half the track—including the starting gate, the entire front stretch and turn to the back stretch and most importantly, the finish line. And, oh yes, we were covered and not in the sun (or the short rain shower that happened right before the Derby race) 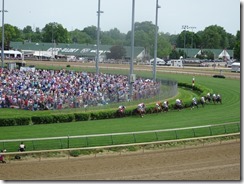 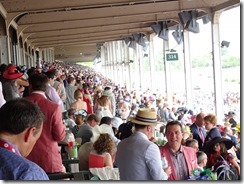 This being said, we especially enjoyed the Paddocks, where we could not only watch the horses being led to their stalls, mounted, and ridden to the starting gate for their races, but also see hundreds of people decked out in their Derby fineries, buy and drink mint juleps (and virtually any other libations and snacks you may want) and buy and smoke cigars. And as a bonus, there were nice views of Churchill Downs’ iconic turrets. 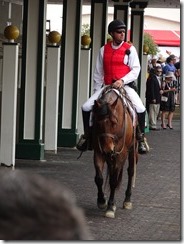 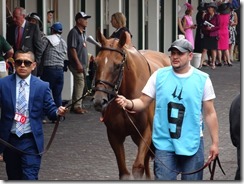 And speaking of food and libations, you can buy these (at relatively reasonable prices) at many places throughout the venue. Nothing fancy, mind you, but dishes such as burgers, fried chicken, barbeque, pizza and all types of snacks—and did I mention mint juleps??

And I almost forgot. There were also horse races. Although most people, including ourselves, were there to view or be part of the show, some people were deadly serious about the races. They were studiously handicapping races, placing bets, cheering on their horses tearing up (or occasionally redeeming) their tickets.

Don’t get me wrong. The races were certainly fun and exciting. We avidly watched horses bolt out of their gates, launch themselves (to up to 40 mph in only three strides) down the stretch and barrel around the first two turns. Then, as they raced through the backstretch, we followed the action on the giant video screens until they came back into view around the final turn to the finish. 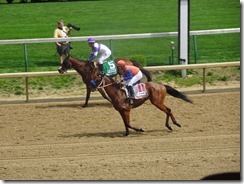 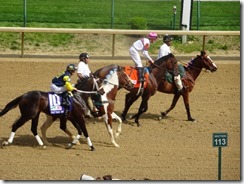 The raw power of the horses, the discipline and control of the jockeys, the exciting calling of the races. One could barely help but to be engaged. Not necessarily through 14 short (typically around two minutes apiece) races, with long, minute waits in between, but certainly engaging.

Then, finally, came the two minutes we had all been waiting for—the Derby itself. But prior to the race, there was the ritual—the introduction of the horses and jockeys, as they and hundreds of their stakeholders and VIPS walked past the stands to the gates, the marching into place of the University of Kentucky Marching Band and the solemn and poignant playing and singing of Stephen Foster’s classic “My Old Kentucky Home”. 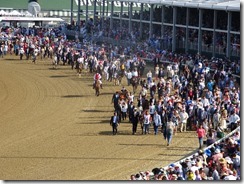 Then, after a few other festivities, they were off! Since David and Tom had each placed small bets, even we had at least nominal stakes in the outcome. We joined in the loud cheering and watched, with anticipation as the thundering mass rounded the turn to the stretch—all of our horses were in contention. Then, Nyquist, the favorite and the horse on which each of us had bet, pulled into the lead and raced past the line in very good, albeit not record time.

But, while each of us had bet the favorite to win, neither of us had straight bets. Toj bet an Exacta. His second horse ran out of the money. David hedged with a three horse Exacta wheel. Although he did indeed win, a $12 bet (for six possible win/place combinations) returned a grand total of $15.30 – not quite enough to pay for the $1,100 ticket, much less the flight, the hotel room, the meals and other expenses, but certainly better than a loss.

But heck, we were there for the experience. Not for the money. And we certainly had our experience.

OK, enough about the race, let’s go to the real attraction, at least for Joyce. The hats. A lot of pressure to make a hat that looked good. While her homemade hat wasn’t as nice as those ready-made ones that cost hundreds of dollars, it was certainty a lot better than many. The hard part is carrying it on the plane. But enjoy the hats. 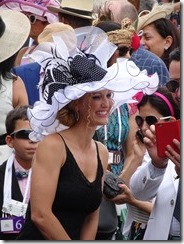 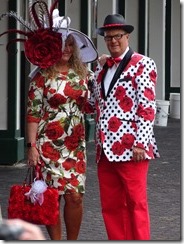 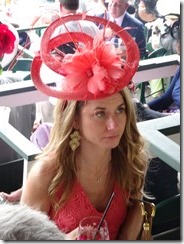 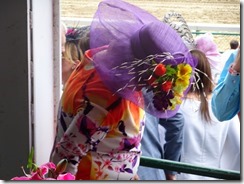 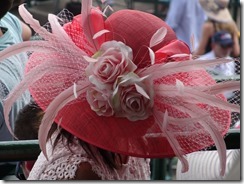 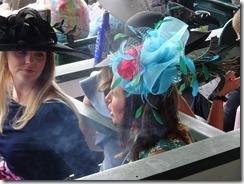 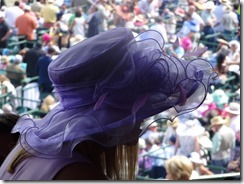 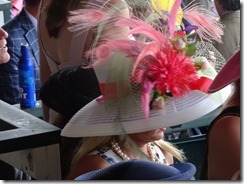 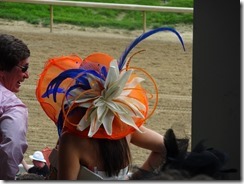 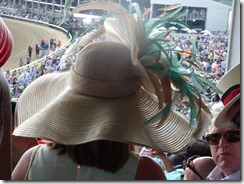