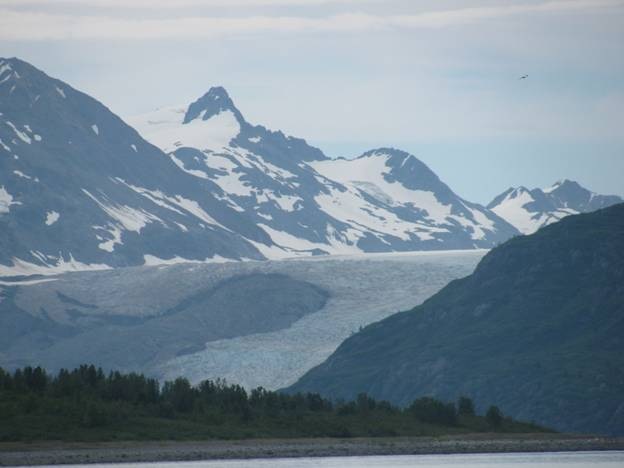 We visited Glacier Bay National Park once before, 27 years ago, to be precise. That visit produced indelible memories of steep fjord walls, iceberg-clogged channels, close-up views of beautiful, blue-white tidewater glaciers, and especially the spectacle of calving—where what began as dull rumbles, turn into sharp cracks, loud roars, and visions of huge chunks of ice breaking off glaciers and plunging hundreds of feet into water as deep as 1,400 feet. We promised ourselves a return visit.

The 3.3 million-acre Glacier Bay is four times the size of Rhode Island. And it was one of the premier stops of this trip. And, given that more than 90 percent of these glaciers are receding, we knew that the sooner we returned the better.

Our Glacier Bay adventure began with a short, afternoon flight from Juneau on a six-seat plane, over the Inside Passage and between (as opposed to over) mountains to the tiny town of Gustavus. This was followed by a ten-mile drive to the Glacier Bay Lodge at Bartlett Cove. We arrived at the lodge about 5:00, enough time to check-in, examine the schedule of activities, plan our two-day itinerary, enjoy a drink on the beautiful deck and eat dinner. We finished just in time for a lovely sunset. 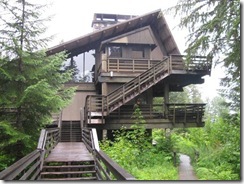 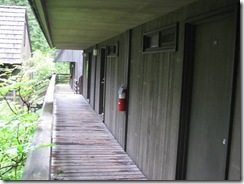 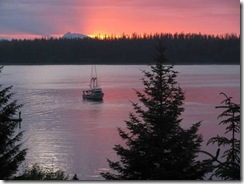 Given our memories, it is not surprising that we dedicate the first day of our return trip to an eight-hour, ranger-led boat trip through the fjord to visit three glaciers. Although this trip resulted in many rumbles and cracks, we also had one big calving event. The trip was still awesome and, thanks to ranger Laurie Smith, highly educational.

The face, especially that of the 300-foot tall (100 below the surface and 200 above) Margerie Glacier, was awesome and produced one big and a few small calving episodes. 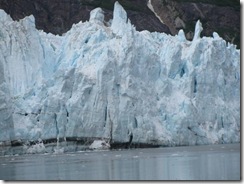 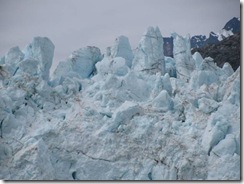 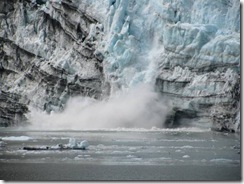 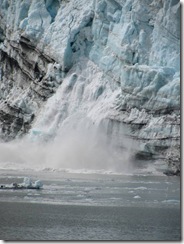 Another glacier, the Lamplugh, was pocked with a huge, blue cave, which Ranger Laurie told us only emerged over the last couple of days. This, along with the ocean of weirdly shaped icebergs that littered the bay, was more than sufficient affirmation of the incredible power and majesty of nature. 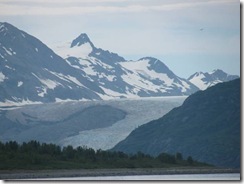 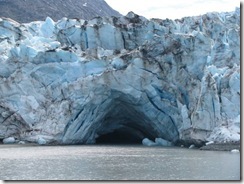 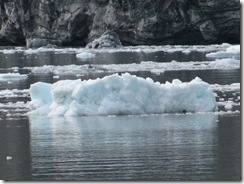 The cruise, however, was about far more than ice. The entire trip was through a huge fjord, surrounded by some of the tallest (up to 15,000 feet) coastal mountains in the world. Many of the taller ones remained covered in snow and a number had their own glaciers, although most were not tidewater (i.e., a glacier that ends in the sea).

The area was also filled with wildlife. Although we returned to the lodge for a movie that showed the life and explained the ecosystem below the surface, there was also plenty to see above. We caught glimpses of: 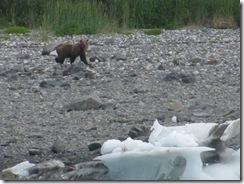 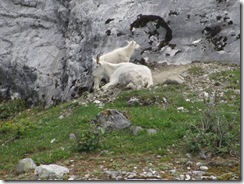 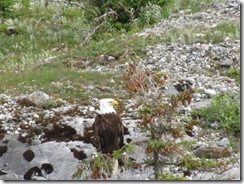 All of this was punctuated by very informative commentary and patient answering of hundreds of questions by our ranger/guide and by satisfying meals and snacks served by the attentive and helpful crew.

Beyond the Cruise to Glacier Bay Lodge

Glacier Bay Lodge, however, offers activities that go far beyond a place to get cruises. It has a visitor center with displays that explain all aspects of the Glacier Bay environment, a broad range of lectures and movies, guest discussions by native Tlingit neighbors, and hiking trails. It offers a wide range of guided and unguided kayaking options, from half-day paddles in the cove to a service that drops kayakers and their camping gear on remote beaches for several days in the wild.

The lodge is also the starting point for three trails (with guided and unguided hikes), including two which we walked:

While our second day in Glacier Bay was the first day of fog and rain that would last for the remaining three days of our Alaskan trip, we almost welcomed the return of more typical Peninsula weather, both because it represents a more genuine experience and because it is so beautiful. So, we stuck with our original plans for the day: A morning of kayaking in the cove and a hike through a temperate rain forest. 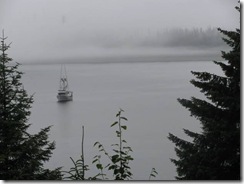 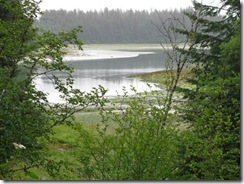 The lodge also supports another important means of travel through the bay—kayaking. The lodge rents kayaks and associated gear and offers guided tours. Those looking to go on long kayak trips can hire guides and purchase transit on the cruise boat to be dropped off and picked up days later from remote shores of their choice. While we admiringly (although certainly not enviously) watched people being dropped off for and picked up from their own multi-day kayak trips, we took a less adventuresome course, renting a kayak for a half-day paddle through the “whale-infested” Bartlett Cove.

Although we were out for only a few hours, we saw everything we could have hoped for, and more. We spent most of the trip tracking three feeding whales, trying, in Wayne Gretzky fashion, to paddle close where the whales would surface. We did pretty well, ending up within 50 to 100 feet of a whale about half a dozen times. When the whales turned out of the cove, we turned our attention elsewhere, very slowly kayaking close to a raft of scoters, who we managed not to spook, near a peninsula packed with gulls and then into a kelp raft, where we even managed to spot a sea otter (which typically eats 25% of its average 60-70 lb. body weight a day to remain warm in the frigid water) munching on a Dungeness crab. (Although we aren’t yet sufficiently adept at sea kayaking and unpacking dry bags to get pictures of unanticipated sightings of moving or infrequently surfacing animals such as otters, we couldn’t resist including a picture of stuffed otters from the visitor center.) 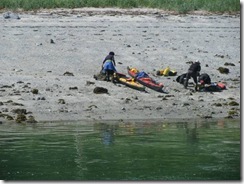 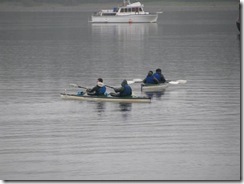 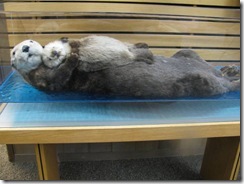 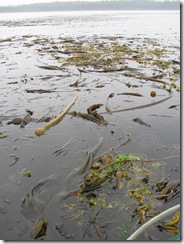 We planned a 4 mile hike walk through a spruce/hemlock temperate rain forest. Our start was slightly delayed when Tom managed to spill a beer (Alaskan Amber to be precise) on his computer’s keyboard. Luckily, Joyce knew all about these things. She immediately turned off the computer, pulled the battery, tracked down a small screwdriver, and disassembled and dried the computer. Thanks to her, my computer, other than for a bit of a malty aroma, was as good as new.

The trail was the epitome of a temperate rain forest; lush, moss-covered, loaded with mushrooms, and very, very green. The bad part was that we did not see any animals. The good part is that we did not run into any bears (which others had been seen on the trail over the last couple of days) or moose (which cause more injuries to people than do bears). 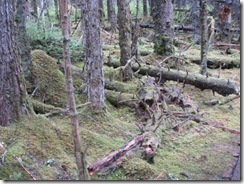 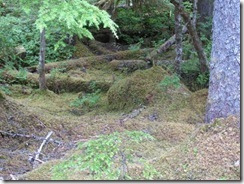 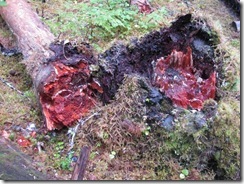 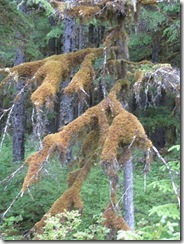 Our room at the lodge was basic, although quite comfortable. The lodge was nice, with a great view of the cove and good, albeit repetitive food. After all, how much Dungeness Crab, crab cakes, salmon, and halibut can one eat? Meanwhile, the staff, especially the maître d’ and the servers were wonderful—friendly, helpful, and remembering our preferences.

This trip ends with a big question—when will we next return? We certainly hope that it won’t take another 27 years.