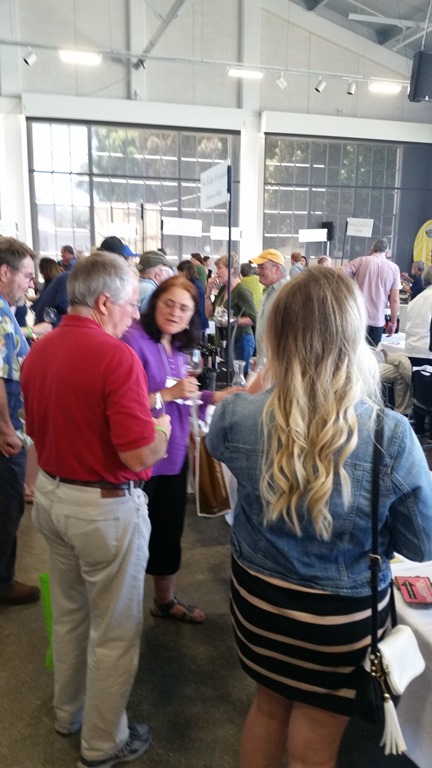 Mendocino is always a great place to visit. The scenery, food, wine, hospitality are first rate. But even better is when we don’t have to travel to taste the foods and wines of the region.

Taste of Mendocino provided such an opportunity in San Francisco recently. There, we had an opportunity to taste dozens of wines from more than 30 producers. Although varietals ranged from viognier to cabernets, the parade was, not surprisingly, led by the Pinot/Chardonnay-centric producers of the center and western Anderson Valley. Although the premium lineup was led by many of the “usual suspects”, such as Goldeneye, Handley Cellars, Husch Vineyards,  Navarro Vineyards and Parducci, the real fun came in exploring the wares of many smaller producers, and some of which we were not previously familiar. These include such wineries as Lula Cellars, Maple Creek and Panthea. One of the best parts is the ability to do side-by-side tastings of similar varietals.

Not all the artisan producers focused on wine. Gowan Heirloom Ciders, for example, offered three types of cider, each made from different heirloom apples. We also got chances to taste locally, artisanal and often organic olive oil, honey and coffee. There were a few particular taste treats, such as with an opportunity to taste three variations of Pennroyal Cheese’s goat/sheep-milk cheeses, each with different amounts of aging, from zero to several months. Starchild Chocolates, meanwhile, provided opportunities to taste and to learn the differences among small-scale, organic, fair-trade chocolate from half a dozen locations, from Madagascar to Bolivia and Nicaragua.

And for those of us who found wines or foods that we particularly enjoyed, many offered the opportunity to purchase their wares on the spot.

A nice treat without having to drive