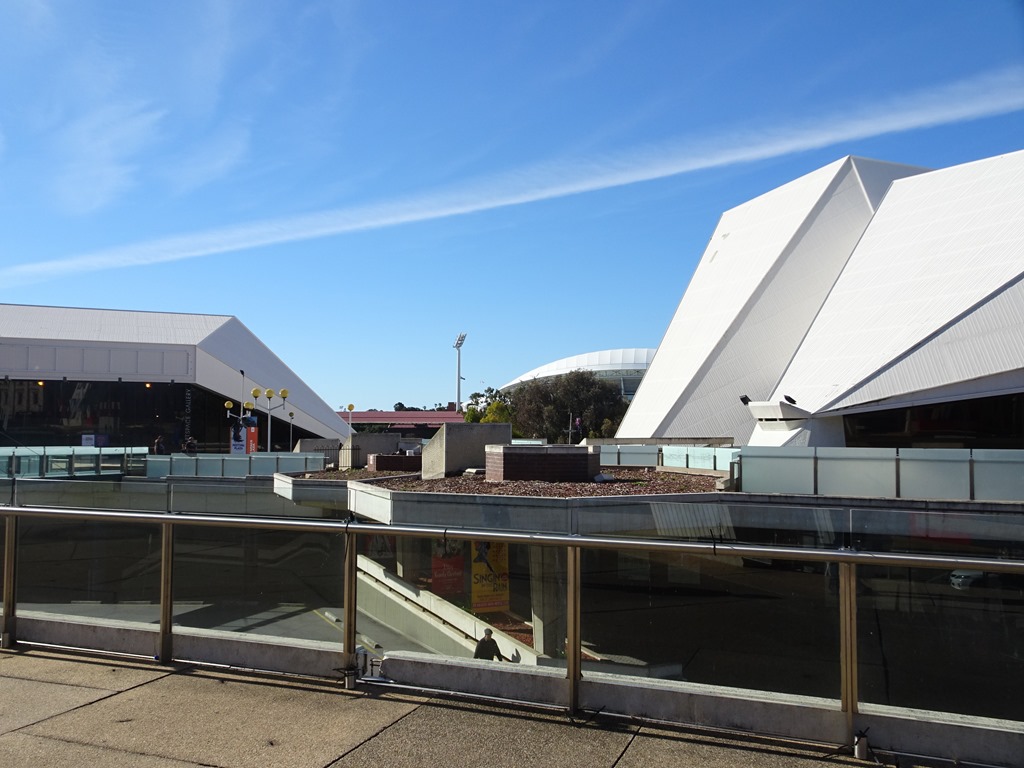 We took a plane from Alice Springs to Adelaide Australia for our next stop. Adelaide is a city of about 1.2 million people. Colonel William Light, a British Army engineer, recruited a number of settlers to his vision of a new, utopian city that he founded and designed just before he died. His vision, however, did not die with him. It grew, generally in accordance with his design, and prospered on the basis of the region’s agricultural bounty and mineral wealth.

Henceforth known as Australia’s “City of Light”, it has grown into one of the country’s most livable large cities. The Central Business District (CBD or what they call downtown in Australia) is about one square mile. It is laid out as a grid and is bordered on the north by the Torrens River and bounded on three sides by manicured, well-maintained parks.

The impressive, so-called “North Terrace”, just south of the river and the park, is devoted primarily to government and municipal buildings including: 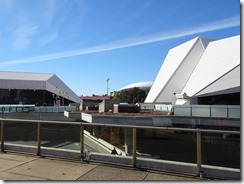 Casino, which is located in the old Railway Station;

Old Parliament House, now the Constitutional Museum, was built in 1889. The new Parliament House, which is located next door, has replaced it. The museum examines how the constitution introduced universal adult male (including non-propertied aboriginal men) voting in 1856, universal female voting in 1894, and became the first country to grant women the right to serve in Parliament. It indicates that they were using secret legislative ballots in 1857. It described the country’s three independent branches of government; and the checks and balances in the constitution and how it operates, including the daily, very civil question and answer period where each member gets to ask others questions about their areas of responsibility; 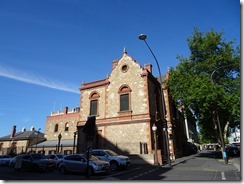 Parliament House, the large building that now houses the South Australian Parliament was completed in 1939. It is divided into two sections, one for each of the two chambers. Accustomed to the challenges of getting into the U.S. Congress, we were amazed by being able to walk in, after putting metal objects through a scanner, and have free access to the public spaces of the building, including walking into the “Strangers Gallery” of each chamber to watch debates (or when we were there, the Q&A period), and being able to freely film and take pictures of the lower chamber while in session (although no photos are allowed in the upper chamber); 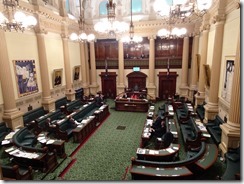 Government House, which serves as the residence of the state’s Governor, was initially built in 1837, and, after burning down, was replaced by a much larger, more formal building in 1928; 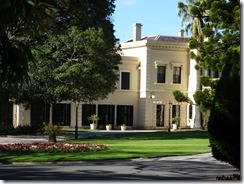 State Library, built in 1861, as “The Institute”, was the first of the city’s public building to be used for public cultural activities. As more specialized structures were built, the functions of this building narrowed to the point where it currently just serves as the city’s public library; 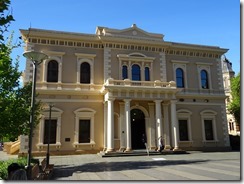 Migration and Settlement Museum  both honors and exposes the many of the abuses and racist exclusionary policies of the country’s history of migration. The story begins in the 15th and 16th centuries with the Age of Discovery, when European powers used new ships and navigation equipment to find new sources of raw materials; through the 19th century when it began colonizing Australia with a combination of convicts, missionaries, soldiers, settlers and bureaucrats and devastated the lives of the aborigines. It examined the process of “Systematic Colonization where, instead of giving free land to settlers, it sold it to wealthy landowners and used the profits to subsidize the migration of poor laborers to work for the landowners. It discussed the abuses and failures of this system, including the bankruptcy of the state in 1841, before 1856 when South Australia was made a self-governing state—which further brutalized the aborigines (especially through application of Darwin’s theories to different races of humans).

But Australia in general and South Australia continued to grow by attracting immigrants. Due to the state’s many forms of explicit and subtle discrimination measures, Northwest European—especially those from the British Isles—were the vast majority of immigrants. Australia declined most applicants that were Eastern and Southern Europeans, Blacks, Asians, convicts and mentally limited applicants were declined admission. In fact, the country began to actively discriminate against and intern its own German and Italian settlers during WW II. This began to change from the late 1940s through the 60s, as Australia was running low on labor, and began actively recruiting and accepting about 200,000 displaced persons and about 500,000 Brits and other North Europeans seeking to escape the privations of post-war Europe.

By the late 1960s, Australia expanded acceptance of many other nationalities, including Asians and began to evolve into much more of a multi-cultural melting pot. The country in general and South Australia is now at a crossroads. On one hand, many citizens are looking to slow growth as a means of improving quality of life, reducing pollution and environmental degradation and moving toward a more sustainable economy. On the other hand, population is on the verge of falling, thereby jeopardizing government funding of pensions and threatening a labor shortage.

University of Adelaide, whose main buildings are in a Gothic style, with its next door neighbor, the University of South Australia; 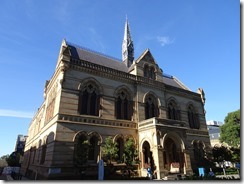 South Australian Museum, which we did not visit, has collections in natural history, Pacific Cultures, South Australian biodiversity and a particularly large exhibition of aboriginal artifacts and culture;

South Australian Art Museum where we happened to arrive just in time for a tour of the museum’s collection. The Australian Collection, which is arranged chronologically, begins with a couple of old Aboriginal masterpieces and two of the first oil paintings believed to be done by Europeans: one an artistic and scientific representation of fish catches and another beautiful representation of aborigines after their first contact with whites. It progresses through the decades to modern fine and decorative arts and a gallery dedicated to modern aboriginal art.

The Europe collection is organized thematically, rather than chronologically, including galleries dedicated to the human condition, love and seduction and death, each with interesting, often abstract paintings and sculptures that relate to these themes. One of the European galleries’ most praised collections is an Impressionist oil by Pissarro. It also has a gallery of European prints and a few galleries dedicated to Japanese art which includes two, lovely, engaging, 60-minute computer-generated sequences by a firm named TeamLab.

There was also a temporary exhibit titled Sappers and Shrapnel that contained a number of related contemporary art exhibitions that highlighted the traumas and tragedies of war—some created from the very remnants (including shrapnel) of war. These included exhibits of life preservers used by refugees (“each with its own story”); an exhibit of refuge blankets intermixed with beautiful white gowns made by a refugee; bead embroideries produced by wounded soldiers both to help them keep their minds occupied and to regain motor skills.

Overall, a nicely curated small museum with an interesting collection.

Ayers House, the former residence of seven-times South Australian premier Sir Henry Ayers (for whom the rock was named) and now a government-protected museum and restaurant; 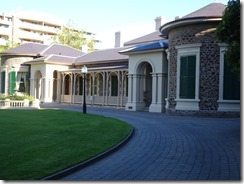 Botanical Chambers, a block-long row of Victorian terraces build in the 1860s to house the city’s rapidly growing population; and 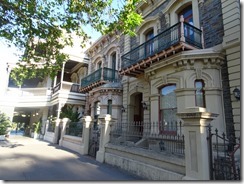 Among the city’s other particularly notable attractions are:

Rundle Street and Mall, a street, several blocks of which have been converted into a pedestrian mall. The street and the lanes that run off them are lined primarily with restaurants, cafes and bars. Department stores and specialty shops line the mall. It also has some lovely arcades (especially the Adelaide Arcade) and historic buildings such as the arcade, the theater and the Beehive Corner building. On the other side of the mall, are small, block-long alleyways, such as Peel Street and Leigh Street, that are lined with some of the city’s most popular clubs. 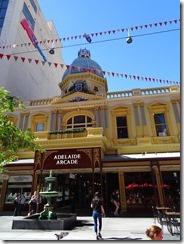 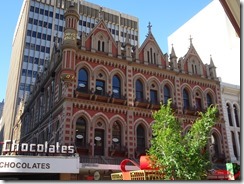 Central Market a huge, ornate Victorian-style market building filled primarily with food stalls, but with plenty of other space for a food court (especially for all types of Asian street foods) and a number of specialty shops, such as for books, clothes, cameras, watches, jewelry, hair and nail salons. Food, however, is the main attraction. While there are many sellers of all types of fruits and vegetables, you can find most anything—fish, meat, poultry, cheese, breads, pastries, coffee beans and one store that sells virtually any type of bulk grains or oils that you want. And that isn’t the only shop with a wide selection. A fish store, for example, has all the standard fish and shellfish plus many species we have never heard of: these include tommy ruff, mulloway, flathead, coolong and leather jacket. In addition to cheese shops, how about one that specializes in stinky cheeses. Want kangaroo? You have to choose among steak, loin, ground, diced, rump, fillet, BBQ or tail. Coffee beans? Sure they have standard Nicaraguan, Costa Rica and so forth. But what about beans from East Timor or Papua New Guinea. 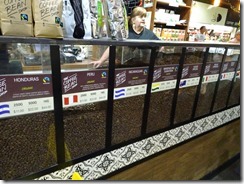 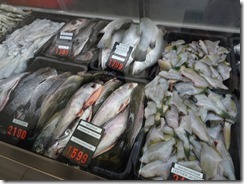 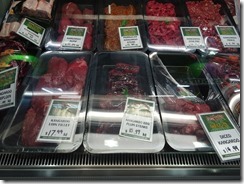 Gouger Street, one of the streets on which the Central Market and the entrance to Chinatown are located, has effectively become Adelaide’s Street Food Central, with dozens and dozens of small restaurants of all ethnic variations—from Argentinian to Taiwanese.

Lion Art Foundation, between Gouger Street et and the Train Station, is an arts complex that consists of performing art spaces, galleries, a retail outlet and studios for painting, furniture-making, glassblowing, pottery, metalwork and painting. 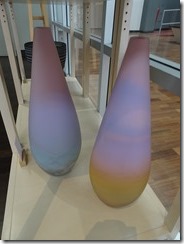 Botanic Gardens, with 50 acres of landscaped grounds and botanical buildings. We took a 1.5 hour guided tour of the gardens where our wonderful guide took us through the numerous gardens and discussed particularly important plants and species in each. We saw pine cones the size of heads; Araucaria trees with amazingly red trunks and branches whose fermented fruit is sought after by animals looking to get a buzz on; beautiful palm, plane and vine-wrapped fig trees, and barrel trees whose trunk expands and contracts depending on the amount of water it has access to.

Although our tour took us briefly through a couple of the greenhouses and buildings, we also took more detailed self-guided tours through two of them. The Museum of Economic Botany, created 150 years ago by the Garden’s benefactor, remains generally as it was. It has samples (either preserved or reproduced) of edible, commercial and medicinal fruits, vegetables, mushrooms, seeds, herbs and timbers that can be grown in Australia, all categorized by family. Why was this so important?  Since South Australia was founded as a free state, settlers needed to be educated on how to rapidly achieve self-sufficiency and commercial success. We were less impressed with the National wine center. Although it had nice tasting facility and conference and event facilities, its displays were so cursory as to provide little value. 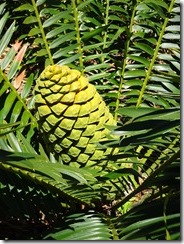 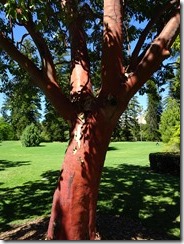 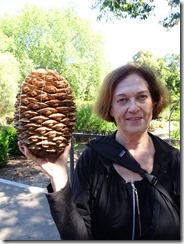 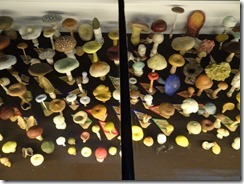 Adelaide Oval, a large sports complex, just north of the river, which houses cricket, rugby and other sports venues, plus a growing number of restaurants and other public facilities. 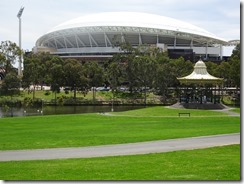 North Adelaide is an area just north of the river. This upscale residential area was created by some of the city’s most prominent families in the 1880s. Homes are largely stucco with ornate cast iron fences and balcony railings, although there are also a number of smaller row-houses and larger public buildings (such as church lecture hall) in similar styles. This residential area is also home to some large, pretty religious facilities such as St. Paul’s Catholic Church and the Methodist Seminar Center. 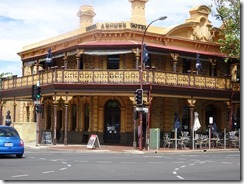 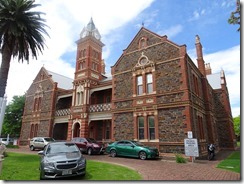