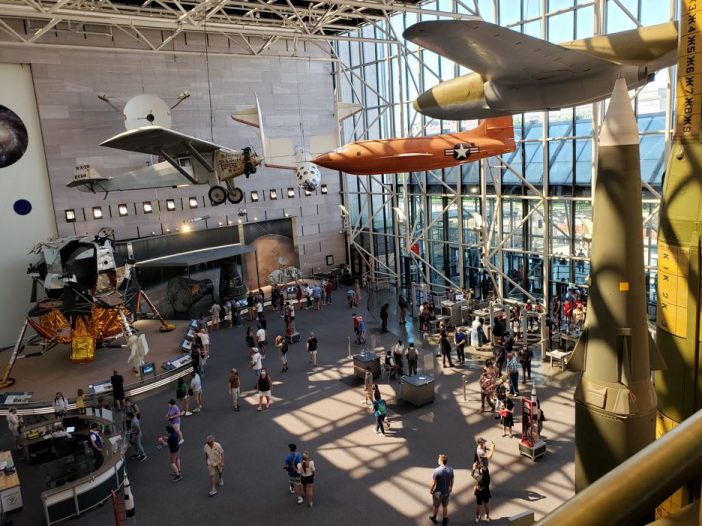 The Air and Space Museum in Washington DC is an interesting and always packed free Smithsonian museum. It traces the history of aviation from the Wright Brothers through the Apollo Mission, Skylab, and the Hubble Telescope.

The Museum has 2 locations. The part of the Air and Space Museum that is located on the Mall is always crowded and required timed entrance passes. A less crowded section of the museum is out by Dulles airport. It contains the Space Shuttle, a 747, and many other interesting planes.

During our 2022 visit to the Mall location, some of the galleries were closed as the museum renovates its exhibits. However, many of the museum’s signature galleries and exhibits were open.

One enters this gallery among models of some of the most iconic aircraft in the nation’s and the world’s history. Detailed panels explain the devices and provide a history of their importance. Among the items on display were:

And don’t forget to take the opportunity to touch a moon rock.

This gallery showcases the second-generation German V-2 rocket. The Germans were close to developing it as a successor to the V-1 that so terrorized England during World War I air raids. It provided an explanation of the critical role that German rocket engineers played in the U.S. and Russian space programs.

On view were a number of early American and Russian rockets, the first Russian-American Apollo-Soyuz docking system, the Hubble Space Telescope along with several of its most stunning pictures, the spacesuits that the U.S. and Russia designed for their first lunar missions, and a life-size model of Skylab through which you can walk through the living quarters and look up into the second level in which they performed experiments—all accompanied by detailed panels that explain their technology and their roles in the space race.

This gallery also explains how the Soviets were the first to recognize the central role of ballistic missiles in delivering thermo-nuclear bombs. In contrast, the U.S. first focused on jet bombers (but quickly changed course). It provides a discussion of the U.S.-Soviet race to land a man on the moon and how the Soviets led every step (first man in space, first spacewalk, first to orbit and return from the moon, and so forth) until the U.S. pulled ahead at the very end. It also describes how space cameras have been turned on earth and enhanced to provide high-resolution images of earth and how they and other devices are used to monitor compliance with test ban treaties.

This gallery explains the history, nature, and role of each of the Wright brothers. Wilber was more disciplined and detail-oriented. Orville was more impulsive and contemplative. Their knowledge of bicycles, including their largely self-developed bike mechanics knowledge and skills (the importance of balance and control, strong and light structures, chain-and-sprocket transmissions, air resistance, and shape), helped them beat trained engineers in creating a workable plane.

They painstakingly tested, assessed input, and redefined every aspect of the plane. They

The gallery described the evolution of naval, air, and space navigation from their origins through GPS systems. It shows a model of each along with the first prototype of a GPS-enabled self-driving car. Although it was a very interesting introduction, the need for the museum to update its explanations of GPS becomes quickly evident.

The gallery traces the evolution of “sky watching” from viewing the sky with the naked eye through the evolution of telescopes from the very first through modern observatories and space telescopes, spectroscopy, and digital light detectors that can “see” the entire spectrum from radio through gamma rays. It shows how this evolution led to the confirmation of the Big Bang and the remaining Big Questions that are still to be addressed such as how the universe began, the role of dark matter, whether there are other universes and how ours and other potential universes will end.

Can we actually live and work in space? What are some of the difficulties that are likely to be encountered, including the huge amounts of thrust that are required to move large numbers of people and required materials into space? The gallery gives examples of the space shuttle which required five jumbo-jets worth of engines and an Olympic swimming pool worth of fuel for every second required to bring the Space Shuttle from zero to the required 17,500 miles per hour in 8 seconds required to bring just itself into orbit. It discussed the challenges of living and working in space, the potential impacts on health and fitness, and so forth.

Looking Forward to What’s To Come

The Museum plans to complete its renovation in 2025. It is so fabulous now. We can’t wait to see what it does to update and augment the amazing exhibits that it currently has.