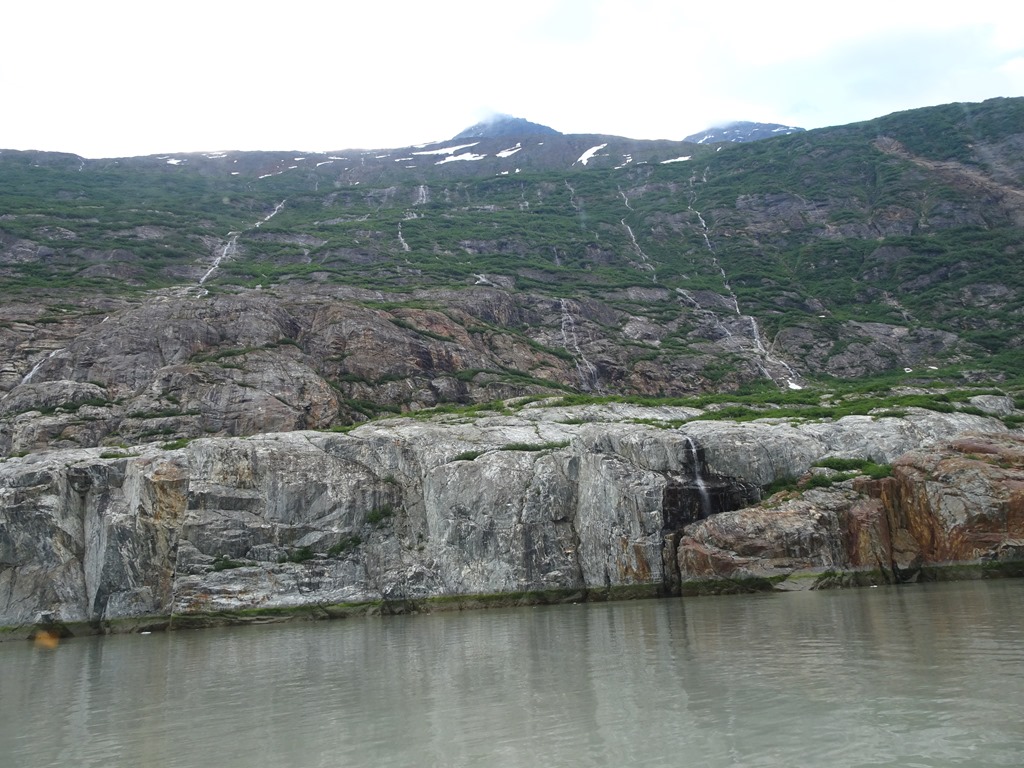 Tracy Arm is a 32-mile long by one-mile-wide (at its widest point) sliver of a deep (up to 800 feet), turquoise-colored fjord whose steep walls stretch to 4,000 feet above the water’s surface. Among the cliffs are large scenic valleys, narrow slot canyons, and all forms of water flows.

Its dramatic granite face has been gouged and scraped by the Sawyer Glacier and the even more dramatic, South Sawyer Glacier. In addition to these tidewater glaciers that terminate in the arm is a couple of smaller, hanging glaciers whose ice ends before they ever reach the saltwater. All of these, both tidewater and hanging, are part of the 1,200-square mile Stikine Ice field. They, like other Alaskan glaciers, are in full retreat.

The outer reaches of the arm, from which the glacier had long since retreated, sports spruce and hemlock trees. 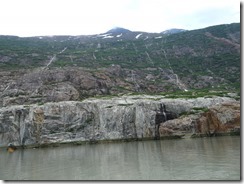 As you move closer and closer to the glaciers, the vegetation changes, as from elder in the middle stretches, to smaller plants, lichens, and algae in closer. The cliffs themselves are particularly dramatic—steep slabs of granite (with patches of brownish-red iron and shiny quartz) that have been scoured and scarred by the weight the power of the advancing glacier, by fierce winter storms, and by the repeated freezing and thawing of rain and snowmelt. Sometimes this water flows down the tall cliffs in narrow, thread-like slivers, other times in powerful torrents. 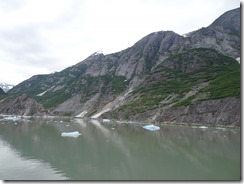 Along most of the cliffs slide straight down into the depths of the fjord, a few have small ledges created from the debris of the lateral moraines left by the retreating glacier. The terminal moraine, the debris left at the front of the glacier’s furthest advance remains submerged at the entrance of the arm—the so-called bar that is mere 10-20 feet by the shore to about 100 feet below the surface (at high tide) compared with the 600-800-foot depth of the inner channel.

It’s All About the Glaciers

Then, of course, are the stars of the show: the glaciers that sculpted the dramatic cliffs. Although we passed and were briefed on the Sawyer Glacier, the best part was spending several hours at the face of the more dramatic South Sawyer. Words cannot accurately describe the beauty. It has a characteristically jagged top (caused by the different speed of movement of different parts of the glacier) and a combination of colors: 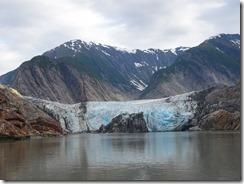 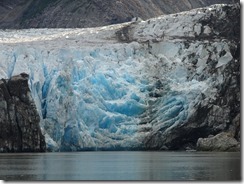 The water was filled with icebergs and other chunks of ice that have calved of the face of the glacier as they reach the warmer (about 40 degrees) water and as the temperatures of the air increase. Most of these calving events are small and barely detectable. Others are proceeded and accompanied by load cracks and shortly followed by dramatic roars when large slabs of ice fall from the glacier and crash into the water.

When we compared our picture of the glacier from this trip in 2021 (above) to our 2011 picture (below), it was very clear that the glacier is receding. While still beautiful it is sad to see. 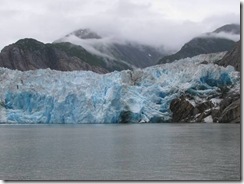 Calved ice is categorized as:

Although these bergs, bits, growlers, and bits display the same range of colors as the glaciers from which they were born, they can be even more dramatic than their mothers. The blues are often even more vivid and the shapes downright eerie as they are dissolved by the water and exposure to warmer air. 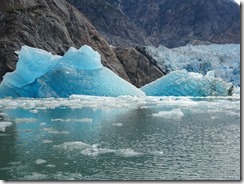 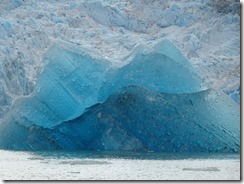 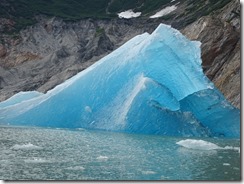 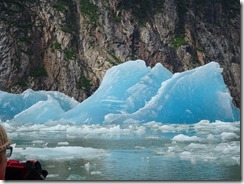 While the glaciers and icebergs are beautiful from any perspective, they appear very different from the third deck of the ship than they do from up close and at sea level from the zodiac we took out to get closer. Neither the ship nor the zodiac, however, could get too close since both glaciers and icebergs can be very dangerous. A huge wave can result from calving. And icebergs often tip over as ice from the bottom dissolves and changes the center of gravity.

While we came to see the glaciers up close, don’t underestimate the wildlife.  Although most animal life consists of insects that reside on the cliff sides and all forms of sea life beneath the surface, there are others as well. These range from the guillemots that build nests in the cracks of the cliff face, to the mountain goats that dance across the impossibly steep mountainsides, and even the occasional bear. While we saw a lot more wildlife on our 2011 trip to Tracy Arms, we did see some harbor seals that often retreat into iceberg-infested fjords to give birth to pups. As the orcas who hunt them don’t venture into the area, the pups can learn to swim and hunt without fear. 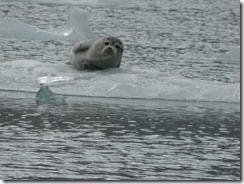 Overall, Tracy Arm is a fascinatingly complex environment that is beautiful to the point of being awe-inspiring. But it is also potentially dangerous both to boats that get too close as well as to our entire way of life as the melting glaciers release a huge volume of water and raises the sea level.

Upon leaving Tracy Arm, we had an opportunity for a short kayak paddle. Then after dinner, we had an interesting presentation on Arctic mammals and another whale watching opportunity from the deck of our ship.

And then while we slept, our ship made its way to our next stop.