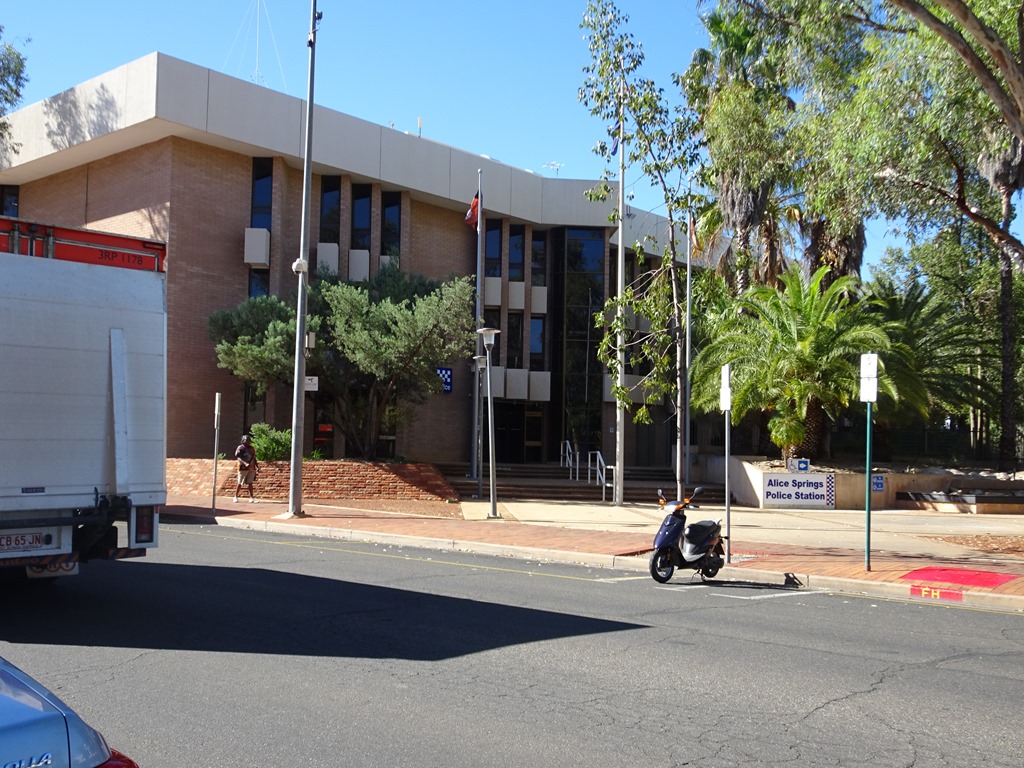 Alice Springs Australia, in the Northern Territory, was our next stop. Although it is the only metropolis in the region, is not much of an architectural showplace or a cultural hub. “Downtown” generally consists of large, typically one-to-three-story buildings (individual stores like Kmart and Target, shopping malls, government buildings, motels and office complexes) surrounded by large parking lots or garages. Many of the smaller commercial structures are located on the two-block Todd Mall, with its numerous aboriginal art stores, clothing stores and cafes and sports bars. 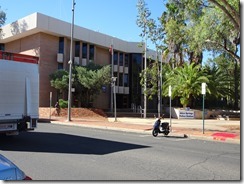 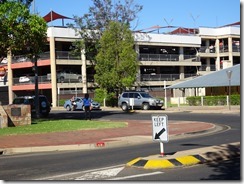 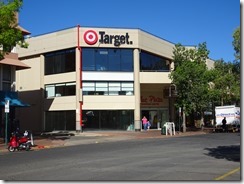 This being said, the Central Business District does have some historic buildings. These include the Old Gaol, Adelaide House (the city’s first hospital) and The Residency (original home of the first Government Resident, from when Central Australia was governed as a separate entity in the late 1920s). 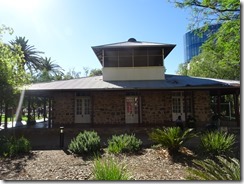 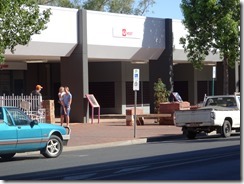 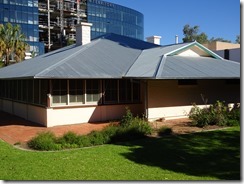 Most of the city’s most important historic sites, however are located outside of the city center. And since the city is so remote from Australia’s other population centers, most of these are dedicated to the two primary capabilities that were instrumental in the founding and development of the town: transportation and communication.

Alice Springs as a Transportation and Communications Center

Alice Springs was founded in 1871 as a tiny, isolated Anglo settlement that was created around a water hole near which the government built a repeater station for a telegraph line that was to connect Adelaide in the south with Hobart in the north. Settlers gradually began to lease land in the settlement that was, and generally still is, in the middle of nowhere–almost 1,000 miles in any direction from the nearest city. Although it was linked to civilization by telegraph, transportation was generally limited to camel trains that were owned and driven by Afghans. This began to change after 1887 when gold was discovered in about 100 km away and Alice Spring’s population began to boom.

Transportation began to improve in the early 1900s with the adoption of autos and trucks, and especially in 1929, when a railway line that connected Alice Springs with Adelaide was completed. This train line, named the Ghan Railway in honor of the cameleers, certainly helped. Unfortunately, this train travel, like camel trains and auto roads before it, was plagued by floods that often shut the roads and railways for weeks on end.

Communication services gradually improved in the mid-to-late 1920s with the extension of telephone lines into the town, the opening of an airport and, in 1929, the creation of the Royal Flying Doctor Service, which brought medical care to residents and residents to larger medical facilities in other cities. But even by this time, Alice Springs had only a few hundred people. It did not get truly reliable coast-to-coast (Adelaide to Darwin) train service until 2004. It has since brought communication technology to the education system with the creation of the School of Distance Education, which delivers radio-based primary education classes to rural children scattered across the Outback.

Given the importance of communication and transportation to Alice Springs’ history, it is understandable that the city celebrates the milestones of these services with a number of small museums. These include the Old Ghan Train Museum, the Road Transport Hall of Fame, the Central Australian Aviation Museum, the Royal Flying Doctor Service Tourist Facility and most important of all, the Telegraph Station Museum at with the history of the city began. 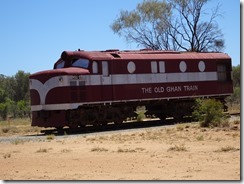 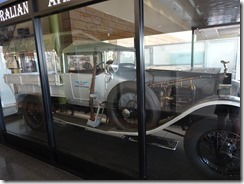 We visited two of these history museums:

The Telegraph Station Museum consists of about a dozen buildings that made up the first white settlement in central Australia. The museum buildings and sites include the home of the Station Master (who was also everything from the top government official and magistrate for Central Australia to the doctor), the region’s first official weather monitoring station, and the power house (where the huge batteries required to power the equipment were located and maintained), the Barracks (the first major building built in Central Australia—in 1871) and the Telegraph Office itself. The museum explains the history and challenges faced in operating and maintaining the station and the services provided to the aborigines. 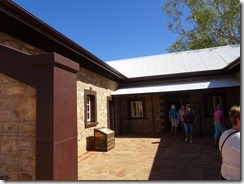 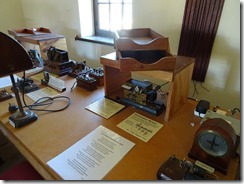 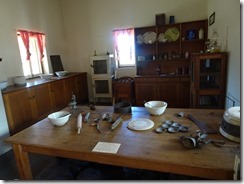 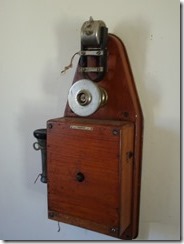 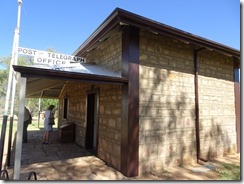 The Royal Flying Doctor Tourist Facility maintains a small museum which provides a history of the men who conceived of and founded the service, its initial services and evolution and a model of one of its planes. The primary educational component is a film that explains how the service evolved and the broad scope of its current services which range from emergency services, to preventative care, health education and transporting patients to hospitals. 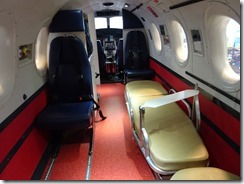 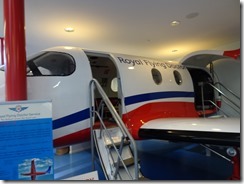 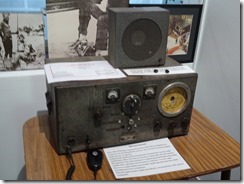 Most impressive of the local educational facilities is a facility dedicated to explaining the geology, natural environment, the flora and the wildlife of the primary ecosystems: Alice Springs Desert Park.

The park is a 86 acre facility that displays more than 300 local plant species and 400 animals that live in this hot, dry desert. The park is divided into three primary zones of the Central Australian environment—Desert Rivers, Sand Country and Woodlands. Each provides background information on everything from the geology, to the environment and the flora and fauna of each of these environments. It also has aviaries and aquariums (as appropriate) to portray the primary species in each and holds regular educational programs around everything from plant medicine, to desert animals to specialized , to programs around red kangaroos and dingos. It has special displays of animals such as dingos, emus and red kangaroos and a huge Nocturnal House (the largest in the country) that displays a broad range of small animals including several species of lizards, snakes, bats, rats, hares, scorpions, spiders, wallabies and wombats. The lives, practices and wisdom of the aboriginal people who traditionally settled in these areas are discussed throughout the entire park. Overall, a very informative facility. 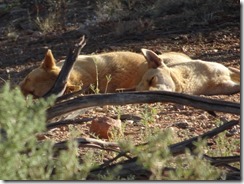 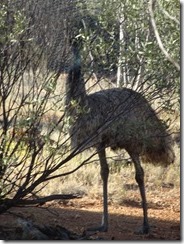 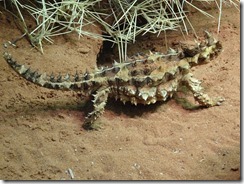 Our hotel was the Chifley Alice Springs Resort. While Alice Springs is a step up from the more rustic places in the outback, it is still a small city with few good dining and hotel experiences. The location was right near the center of town and not far from the Hilton Doubletree. We didn’t use the pool at all. Our room had a comfortable king size bed, a balcony, a small shower and a separate tub. We had a hot pot, safe, ironing board too There is plenty of parking. It was a good value for the price but if we return, we might try the Doubletree.