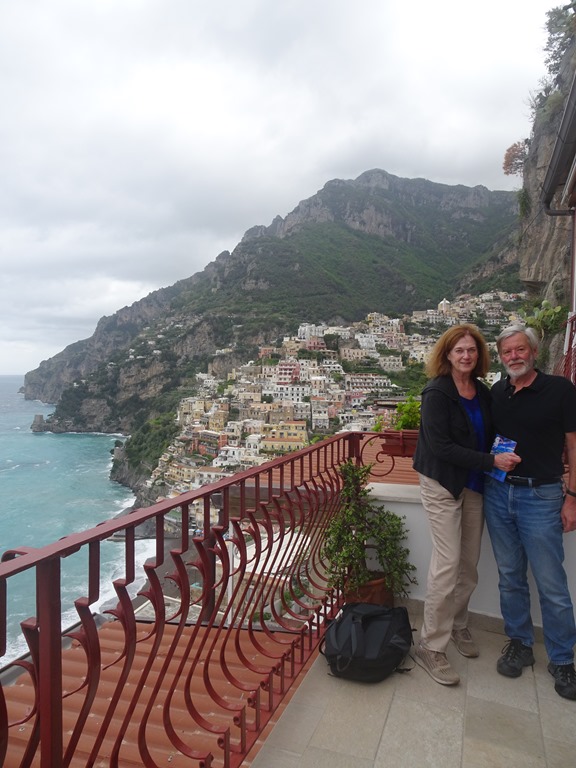 Our plans were to leave from Capri via a 30-minute high-speed ferry to go to Positano. This would be our home base to take in the full grandeur of the incredible Amalfi coast, then to see it again by land via a combination of bus, taxi and especially on foot on a part of Sentiero degli Dei, or Path of the Gods, a trail and long flights of trail along the ridge running atop the cliffs into which the Amalfi Coast towns are nestled. But things don’t always go as planned.

Our first setback came getting to Positano. Winds and rough waters forced cancellation of our ferry. The only way of getting Positano was by taking a regular passenger ferry to Sorrento and then catching a bus to Positano.

The ferry, while somewhat late, did get us to Sorrento without incident. We even managed to scale the cliff from the harbor to the city by way of an elevator that someone told us about for 1 euro each—a bargain when compared to trudging up a hill with our suitcases. Then, after a few sets of contradictory directions, we even found the bus station.

It was there that we ran into additional issues. First, the 1:00 bus, on which we managed to score perfectly situated window seats, was cancelled—or at least that is what we were told. They told us there waas an accident of the road and to take a different bus, which was coming in a few minutes. Well, the 1:00 bus took off as scheduled…after we had gotten off of it of course. And after a number of contradictory and misleading promises where we were continually told the new bus would be there is a few minutes, it finally came at bout 2:30. The seats on the seaside of the bus, however, were already taken and we had to sit on the opposite side; our view blocked by standing passengers. We did get seats, which was a good thing, but no views.

We ended up arriving in Positano about 2:45 and, by the time we checked into our hotel and put our belongings into our room, and got our pictures taken on our private balcony, it was after 3:00, just about enough time for stroll down to the beach, an exploration of the galleries and restaurants, and a return to our hotel for a wine tasting and then dinner. (see below for discussions of both). 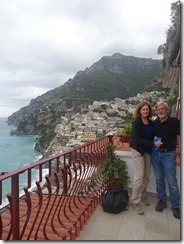 We had two primary reasons for our return trip to the Amalfi Coast. First, to view again the non-stop panoramic views of the entire coast, and second (which was really the most important objective) to hike a trial that is generally viewed as the most beautiful in Italy, and one of the best hikes in the world, the so-called Sentiero degli Dei, or Path of the Gods. But more on that in another blog. Let’s first talk about some of the towns on the Amalfi Coast

This beautiful “Vertical City” which tumbles down the slopes of Mt.Comune and Sant’Angel to the beach. We navigated the maze of alleys and stairs, without much chance of getting lost, since in the end, you can only go one of two ways; up or down. While the beach stops you from going too far down, there is, as we discovered, little to keep you from going too far up, out of the city to evermore dizzying views. 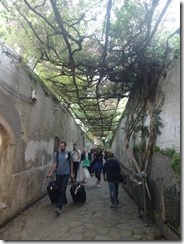 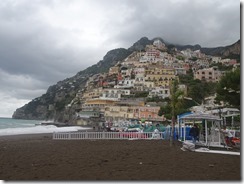 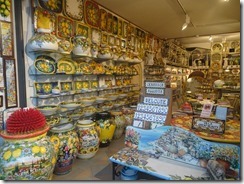 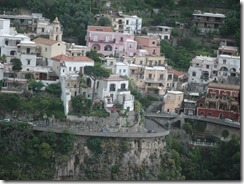 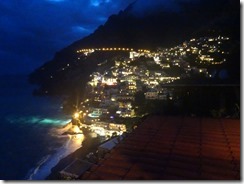 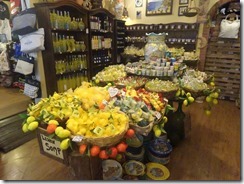 The town itself consists of a mostly upscale mix of clothing and sandal stores, jewelry and art galleries, ceramic factories and showrooms and, as appears to be obsessed, as is much of the coast, by the “Cult of the Lemon”, a fruit that grows just about everywhere, and to incredible sizes. Lemons are everywhere: on trees, in stores, at hotels and restaurants, and in every imaginable form from fruit, to soap and shampoo, to powder, sugar and oil, to pasta and rice, in gelato and biscotti, cakes, frostings and painted on glasses, plates and many of the ceramic items produced in the area. And, most important, in lemonchello.  It indeed seems to be a cult.

Hotel Eden Roc. This hotel was so comfortable that we didn’t want to leave. The front desk staff was excellent and very patient. It was a 5 minute walk from the bus stop, which makes it very convenient. We had a large bedroom with a separate sitting areas and a balcony with a beautiful view overlooking the sea. Bathroom has a shower with multiple jets as well as a Jacuzzi—although we never figured out how to use the multiple jets. The restaurant on the 5th floor has beautiful views and has good food They have a wine tasting for 18 euros at night where you select 3 wines and it comes with small bites. A great value and good education on wines from the area. Of course, they can also put together wines and ship them to you (it was mentioned multiple times—perhaps a little too strongly).