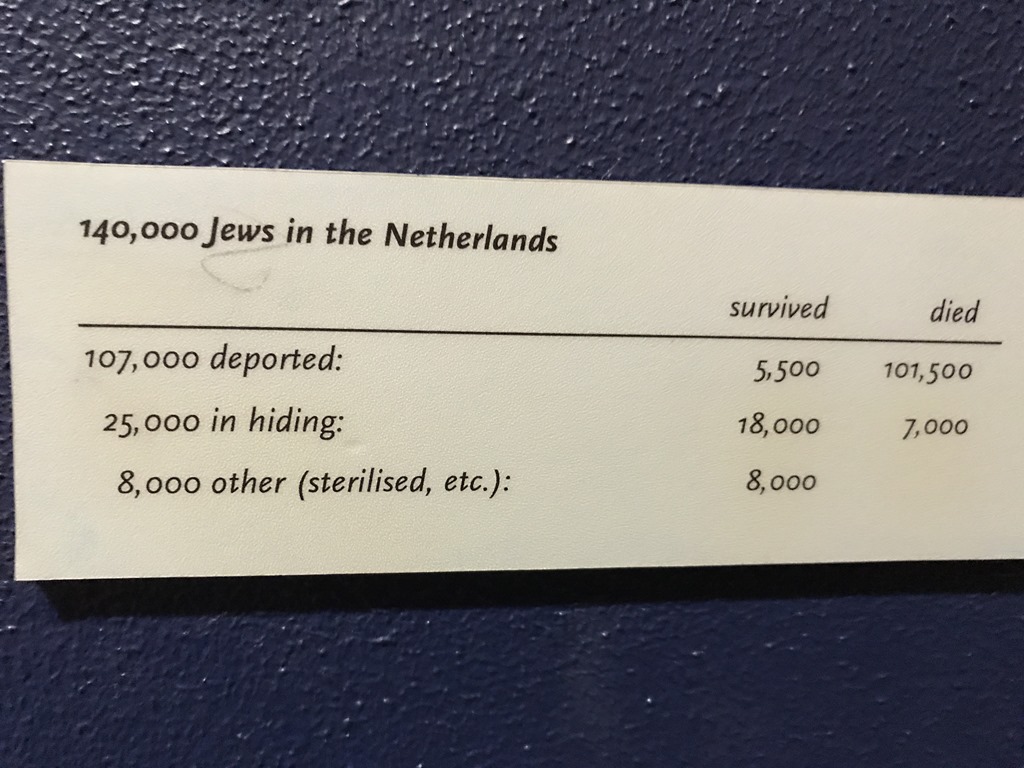 This is part of a series of posts on Amsterdam written by guest contributor, David Gavenda.

I visited a number of museums during my month in Amsterdam: Especially history and art museums. I was particularly impressed with two of each:

Located just outside the Jewish Cultural Quarter, the Resistance Museum explains and provides examples of how local citizens hid Jews and others from the Nazis. At one time in 1944, as many as 300,000 people were in hiding in the Amsterdam area, only 25,000 of whom were Jews. The rest were solders, resistance, students and others trying to avoid being deported as slave labor to the Nazis war factories and death camps.

Before the war Amsterdam had 140,000 Jews. 107,000 of these were “deported” and died in death camps and an additional 8,000 in mixed marriages were sterilized. One display tells of a plot created by the London-based Dutch Government in exile that called for a railway strike on the day the allies planned an airborne landing in Arnhem. Although the strike was carried out, the landing was called off and the 30,000 striking railroad workers had to go into hiding. Interesting displays include the printing of underground newspapers and forged documents used to avoid arrest and deportation to the death camps. The museum also has a section devoted to Japan’s mistreatment of the residents of Holland’s former Dutch East Indies colony during WW II. This is a very interesting museum that unfortunately, falls below much of the city’s museum radar. 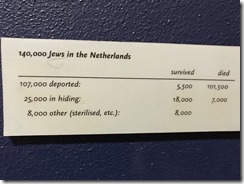 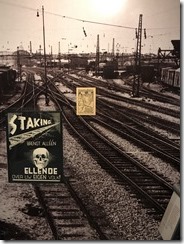 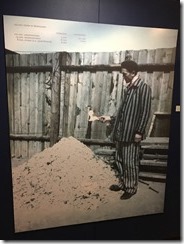 I had expected to spend 1-1.5 hours in this Museum, but lost track of time and was here for over 4 hours. The museum includes a life-sized 17th Century sailing ship that can be toured and has over 300,000 other items on display. The Golden Age in the Netherlands was created by the wealth brought on by trade, most of which was conducted by sea. The Museum contains displays that explain and portray these glory years, the growth of large shipping companies and their ports of call. It also explains the growth and role of the Dutch Navy in protecting shipping routes during the years in which the country ruled the world’s seas.

All displays are well organized and explanations are in multiple languages, including English. They explain everything from how early explorers navigated the seas before the sextant and compass and how sailors lived on year-long voyages. The museum also has a huge collection of ship models and Dutch paintings that depict many of the nation’s most important naval battles, especially those fought against England and Spain.

The self-tour audio guide does a great job explaining the countless displays that include the history of navigation, ship building and world mapping. 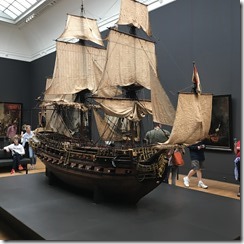 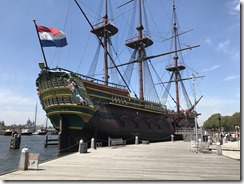 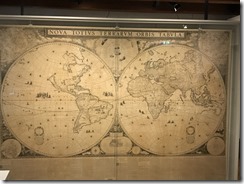 The Rijks is the “state” museum of the Netherlands. They do a very good job telling the Dutch history story using famous works of art. Their presentations are very unique, and informative. One of Rembrandt’s most important works, “Night Watch” is on display. An accompanying handout tells the story of the painting, with descriptions of most of the characters and objects that Rembrandt painted into the work. Fascinating. With the museum’s large size, they are able to dedicate rooms to segments of Dutch history not addressed in other museums. One room, for example, is dedicated to alcohol abuse in Dutch history. The room is filled with paintings, drawings and statues depicting the Dutch having a cocktail or two.

Besides works of art the Museum includes displays of furniture, porcelain, firearms and other artifacts. All are tied to a specific historical time period, giving you a good sense of what it was like to live in Amsterdam and the Netherlands during these eras–especially the “Golden Age”. The Museum also contains one of the most complete Dutch Historical libraries. Scholars come from all over the world to use this research facility.

You can get lost in time inside the Museum exploring Dutch history. I was there for 3 hours and could have spent more time. 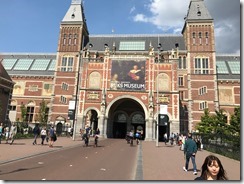 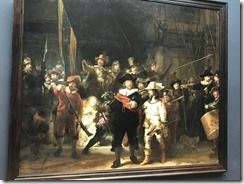 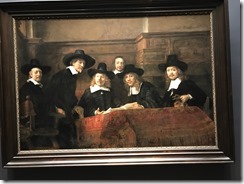 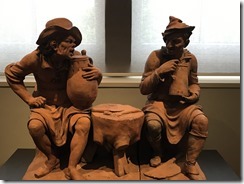 The museum is located in the house in which Rembrandt lived and worked between 1639 and 1658. He could afford it, as I learned only because he married Saskia Van Uylenburg in 1634. Saskia came from a wealthy family whose parents left a large inheritance that was partially used to purchase this home. Saskia and Rembrandt had four children before Saskia’s death at age 29. Three of the children died in early childhood.

The museum provides great information about Rembrandts private life, work, and business dealings. Most interesting is the main studio where the artist created his most famous works. Another room served as a teaching studio where he taught up to five students at any one time, providing extra income. Another room contains a large number of collectible items that the artist bought during his life time. You will hear the story of how Rembrandt continued to buy such expensive collectibles even when his income did not match his expenditures. This, among other reasons, led the artist to declare bankruptcy in 1656.

Multiple demonstrations are given during the museums hours. One shows how the mixing of oil and pigment created the artist’s paint. Another shows how etchings are created.

Note: You will not find any of Rembrandt’s “famous paintings” here, however it does contain a very large collection of his etchings and drawings. In addition, a modern wing of the museum contains temporary exhibits of works by some of Rembrandt’s contemporaries.) An informative, free audio guide is available. If you are a Rembrandt fan, I recommend you visit this home before moving on to the larger museums that contain his more famous works. 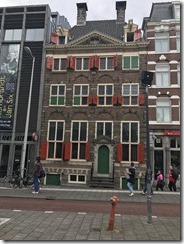 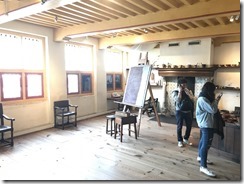 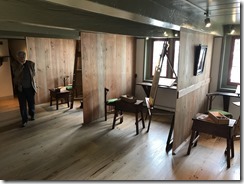 I also visited a number of other museums that I found to be less compelling. These included:

I don’t recommend this unless you have young children as most of the science on display is what you would have learned in grade school. I only include this to show one unique feature of the Museum. A large section dedicated to sex education for children. The sex education area is labeled “The Peep Show”. It has sex education videos booths, displays of sexual positions, examples of contraception and etc. It was very interesting to see groups of grade school age children being led into this area by their chaperones. The adults would allow the children to enter the area by themselves and wait for them at the exit. 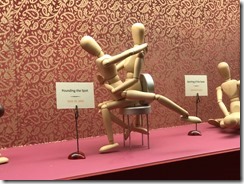 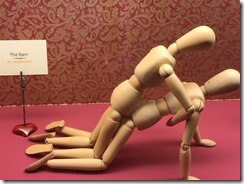 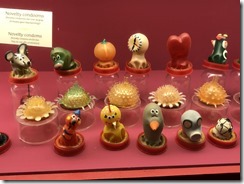 Located in the Jewish Cultural Quarter, this is a work in progress. Unfortunately, the progress has not been sufficient to justify one’s time; unless that is, you are in town for a month, as I was. One small room contains exhibits and another, a user-activated video screen with names of the Amsterdam’s holocaust victims. The most interesting item in the museum was an official list of the number of Jews that were “deported” each day from Amsterdam during the Nazi occupation. The Nazis certainly did keep meticulous records of their dastardly deeds.