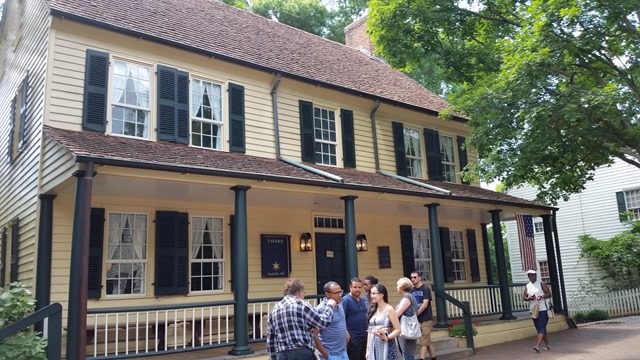 We had a long day’s drive that would take us through both Winston-Salem and Greensboro. Although we had little time to spend in either, we were able to at least find time for lunch and catch street-side views of some of the cities’ primary sights.

We did, however, have a bit more time in Winston-Salem. Although downtown was similarly closed for business, the restored historical strict of Old Salem was open for business. Although we didn’t have time to stop in to tour the attractive half-timber, Federalist and Victorian buildings, we did at least get a chance to see many of them from the outside.

We also managed to come across the very beginning of a street festival that was somewhat ambitiously billed as the National Barbecue Championship. Apparently, or at least from when we were there, the organizers failed to notify the public–or many contestants. The fair consisted of a handful of BBQ and beer stands, and tents of vendors promoting everything from kitchen utensils to newspapers. The fewer than 100 attendees appeared less than excited.

Lunch turned out to be the highlight of our all-to-brief Winston-Salem stop. Our meal consisted of two of Mozella’s signature dishes: tomato pie (vine-ripened tomatoes baked with cheese and herbs in a hand-rolled crust) and of course–shrimp and grits. Although the tomato pie was very good, this stop may have been the culmination of our ongoing search for the best shrimp and grits. As if cheesy shrimp and grits are not inherently fattening enough, Mozella’s adds a kicker–a super-rich sherry cream sauce! Extraordinary. It may ruin us for the dish forever.

While we would have absolutely found however much time it would have taken to explore Greensboro’s International Civil Rights Center, which is housed in the F.W. Woolworth store in which four black students staged their landmark 1960 lunch counter sit-in. Unfortunately, we had no flexibility in scheduling the day we would pass through the city: it had to be Sunday. The Center, along with the rest of downtown Greensboro is closed on Sunday. So, we were relegated to “experiencing” it from the outside.