When one thinks of Rome, the movie “Roman Holiday” may come to mind. Or maybe it is Ben Hur or just images of the Colosseum. Whatever image pops up, it is only one dimension of Rome. As it has been years since we last visited Rome (in 2007 to be exact), we decided to make it our first stop on our 2018 April –  June European adventure.

First and foremost, Rome is about history. You can’t dig a hole without the possibility of finding some remnant of the past. We re-acquainted ourselves with historic Rome via a FreeTourRome tour as well as visiting inside many historic sites.

Piazza Venezia is in the tourist-packed center of the city, sandwiched between the ancient and Renaissance sections. It houses a 600 year-old Palazzo Venezia, which was built as a residence for cardinals, later the palace of Pope Pius IV, and, during WWII, the headquarters of Mussolini. It currently houses a museum and a lovely basilica. 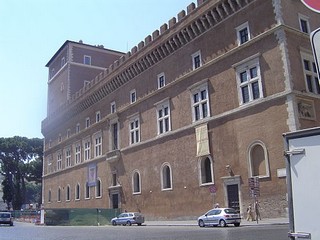 Across the Piazza, built into the side of Capitoline Hill, looms the huge, awe-inspiring, marble-clad, Victor Emmanuel monument (which commemorates the first king of modern Italy), which houses a War Memorial, Tomb of the Unknown Soldier, rotating art collections (currently “diploma paintings of graduates of the Russian School), a museum, and plazas that provide lovely views of the city. 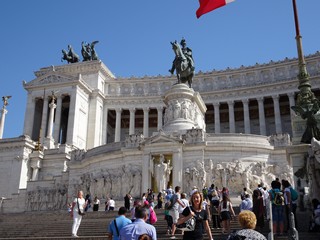 The base of the hill contains the excavated remains of Commune of Rome, a multi-storied residential complex the first few concrete and brick stories of which were buried by a series of Tiber River floods and the upper wooden stories burned in Emperor Nero’s Great Fire of 64 AD. Directly across the street, another ancient excavation: this of the 2,000 year-old Theater of Marcellus, a massive, open-air theater that was thought to have served as a model for the Coliseum, and the upper floors of which are still used for concerts. 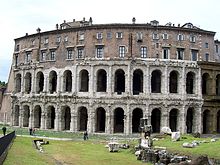 The top of Capitoline Hill, which is reached by the Cordonata (a stepped-road) that leads to Michelangelo’s beautiful, geometrically-paved, Piazza del Campidoglio, with its bronze statue of Marcus Aureleous, which was alledgely the world’s first equestrian statue. The piazza is flanked by three majestic, Renaissance-style buildings, the facades of which Michelangelo also designed. These are the Palazzo Senatorio (the seat of the city government) and Palazzos Nuovo and del Conservatori (which now house the Capitoline Museums). The front of the plaza, meanwhile, is dominated by two  giant marble sculptures of two demigods (Castor and Pollux) which surround the top of the Cordonata. And around side the Senatoro, a model of the famous statue of Romulus and Remus, the two baby brothers suckling at the teats of a wolf. Legend has it that Romulus, who eventually killed his brother, went on to found the village that was to become Rome in the 8th century B.C. 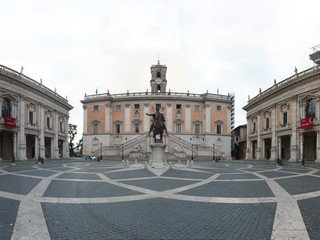 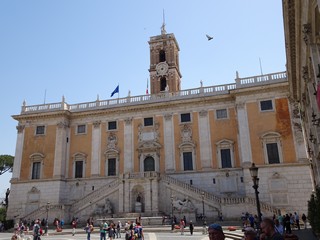 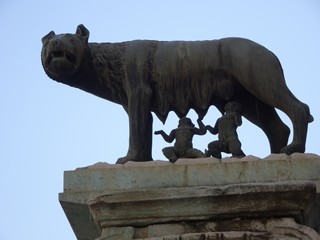 The remains of the huge Roman Forum lie in a field just behind Capitoline Hill. The Forum, which used to be a swamp, evolved into a meeting ground and market for several small, surrounding communities. Over the years, it was drained and became a venue for games and official meetings. Between the third and first centuries BC, it become a huge, elaborate open-air market and underwent major construction to become the city’s primary business and judicial venue and ceremonial center. It is now a field of preserved ruins, with remnants of a number of pagan temples, a massive basilica, the House of the Vestal Virgins and the well-preserved triumphal arches commemorating and pictorially representing the campaigns of Titus (commemorating the sacking of Jerusalem), Septimus Severus (a Libyan who was to become the Empire’s first black Emperor) and Constantine (honoring his victory over Roman co-emperor Maxentius. 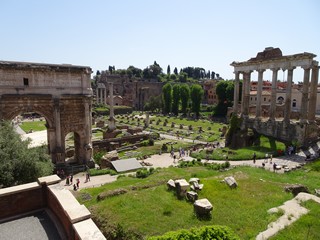 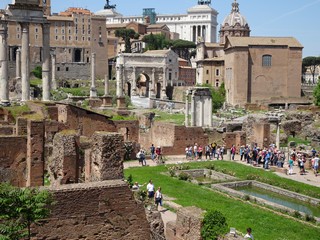 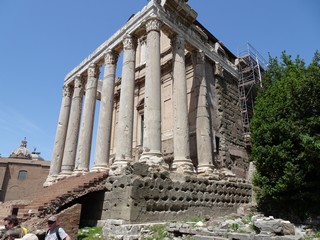 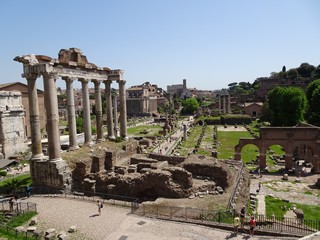 Contiguous to the Forum of Rome are a number of smaller forums, built to honor heroes (typically military conquerors) such as Caesar, Augustus and Trajan. Trajan’s Forum is the largest, most ambitious and best preserved with its colonnades, and especially the 98 foot-tall (not including the bronze statue of the hero) Trajan’s Column, whose diagrams detail the history of his victories. 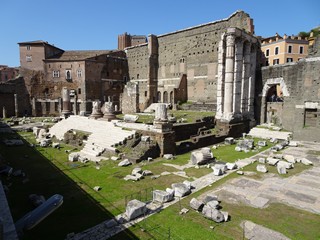 And what tour of ancient Rome would be complete without a visit to the Coliseum? 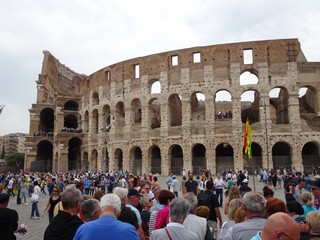 This easily identifiable icon is known for its:

It is, however, quite interesting to walk through the  Coliseum and to view (from above only) its exposed basements, with its rooms, cages and corridors. It also is interesting to see some of the displayed, original architectural elements and to read panels describing the building, the seating arrangements, the entertainment schedules, the animals (including lions, tigers, bears, elephants, hippos and rhinoceros) that were killed (and immediately slaughtered and the meat given free to citizens) and the multiple and vicious forms of capital punishment inflicted on condemned prisoners. These included crucifixion (which was banned in 313 AD), being hunted and eaten alive by wild animals (not fun), being burned in oil-oaked tunics, and somewhat more mercifully, being slashed and skewered by swords, all in the name of entertainment. 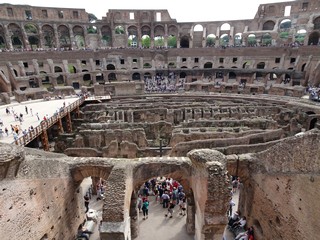 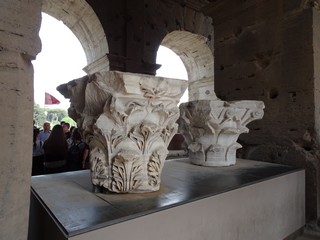 Even more impressive than many of these remnants are those built into the side of the neighboring Palatine Hill, on the other side of the forums from Capitoline Hill. This, supposedly, was the birthplace of Rome, with traces of mud huts that have been traced to the 8th century BC. By the turn of the millennium, it had become the most exclusive residential area of the city, with spectacular, ornately decorated, multi-story villas of Emperors, Senators and the most wealthy of the city’s aristocrats and celebrities, including those of the orator Cicero and the poet Catulius.

Our visit consisted of a walk around of the ruins and five primary stops: 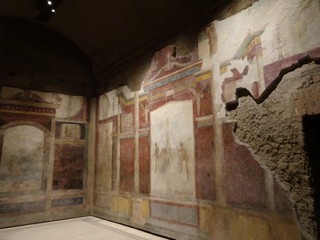 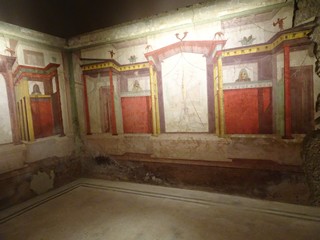 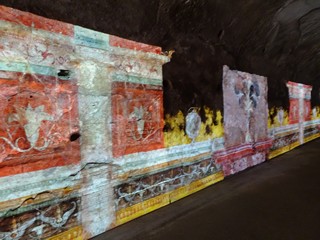 The tour was also sprinkled with bit-sized overviews of various types of context for the areas that we explored, including the: