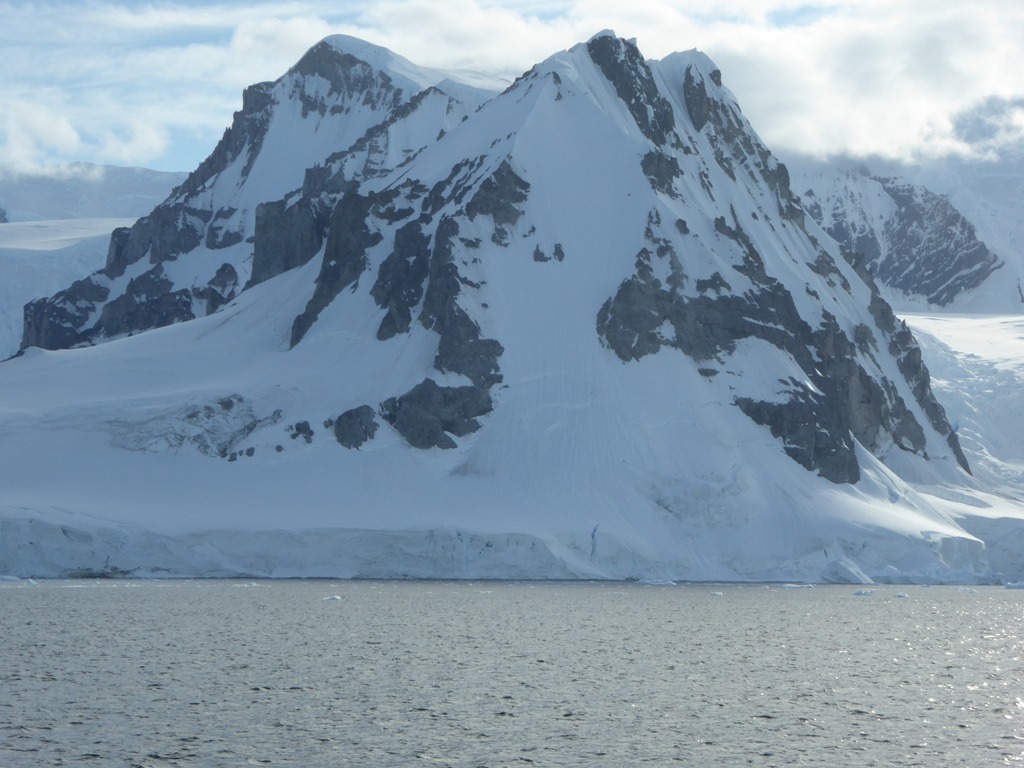 Our trip to Antarctica continues. So far we have gotten close to penguins, birds and seals as well as an old whaling station on our Antarctica expedition with Polar Latitudes. What adventures would the next days bring? A lot!

Day Five. Our first stop on this day was on Danko island where we once again marveled at the majestic snow covered mountain peaks. and glaciers. 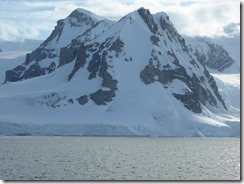 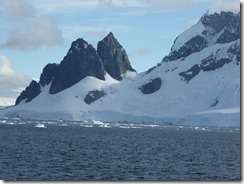 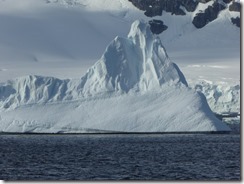 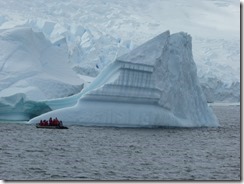 Then on to Neko Island. The Day excursion was incredible. After a Zodiac ride through the beautiful iceberg-infested harbor, we reached land. After passing a few large penguin rookeries, with some of the largest, best defined nests we have seen, we embarked on a 350-foot climb up a snowcap-topped glacier to a rock outcropping that provided extraordinary views over the glacier-lined harbor. Many of the glaciers had a number of large faults, that glowed an almost iridescent blue—absolutely incredible. 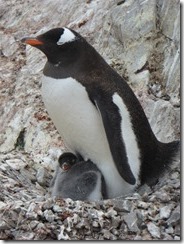 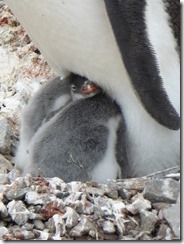 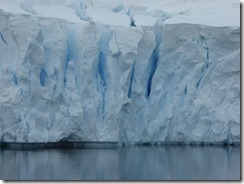 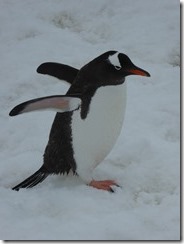 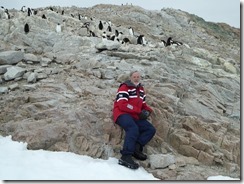 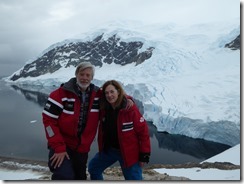 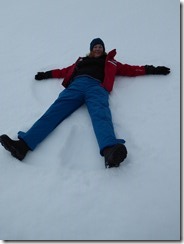 After a brief walk and view over the other side of the glacier, and Joyce’s attempt to speed her descent by sliding down the hill on her back (and her attempt to make a snow angel), we paused between two penguin rookeries. We then saw a chick, that was either abandoned or waiting for its parents to return with food. He left the nest in the higher rookery and wandered (more like stumbled and slid) down the hill near our feet. We remained perfectly still, watching the confused chick while it called for its mother. After a couple minutes, it wandered over to Tom’s boot, where it rested its head and then tried to stick his head up Tom’s pants leg. It remained, apparently very comfortable, for perhaps 10 minutes, with his new adopted father. By that time, we had to leave to return to the ship. After crying for a while, it found another boot to adopt. 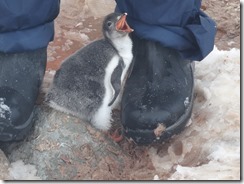 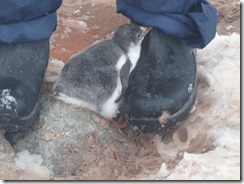 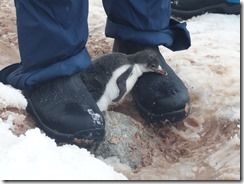 What are the prospects for his poor, lost chick? It depends. If the parents return, find it and coax it back up to its nest, it may well survive. If not, it will not be adopted by another penguin. In this case, it will either starve or be picked off by a skua or some other bird. Although very sad, it is, unfortunately, the way of nature.

Camping on the Antarctica Peninsula. But our time on Neko Island did not end there. We returned to the boat for dinner and then went back for a night of sleeping there in a tent. OK, we were skeptical about this but we figured how many times would we sleep on Antarctica? After landing again on the island, we then had to dig through frozen snow to create a level foundation for our tent, figuring out (with help from the guides) how all the pieces of our tent package fit together, stuffing our gear into the small tent, hiking a quarter mile of rough, frozen, slippery snow to one of two portable toilets placed, in the open behind a rock and eventually laying down and trying to sleep with the sound of glaciers calving, penguins called out to each other and being in the land of midnight sun (although the sun did “set for 2 hours, it was never dark).

By that time we began asking—why in the world did we sign up for this? And then we were happy about making the decision to sleep in a tent. Five of our comrades (almost all younger than us) chose the more challenging option of sleeping in a bivvy bag, a waterproof nylon bag into which you put a sleeping bag and then seal up with an opening only for your mouth and nose) which you place in a deeper foundation than we had to dig.

The questions persisted over the first couple of hours of trying to go to sleep (in anticipation of a 5:30 AM wake-up and a full agenda for the following day) again at 3:00 AM when we woke cold and in need of a hat to rewarm our heads and socks for our feet; and again at 5:00 AM when we woke on our own, struggled to put on the boots that had frozen over the night to make a beeline to the portapotty before everyone else got in line. Then we broke down our site, and tried to stuff our tent, sleeping bag and air mattress back into their impossibly small bags. And since we didn’t want to leave any traces, we had to use a hatchet and heavy shovel to break up and shovel the frozen snow we removed from the foundation for our tent, back into the hole we created.

But then even on the zodiac back to the warm ship (not to speak of our shower, our toilet and our toothpaste which is not allowed on the pristine continent), we thought back—not only of the self-satisfaction of knowing that we were among the perhaps 100,000 people to have ever slept on the continent, but also the sound of penguins and especially the cracking and calving of glaciers that we heard throughout the night, the view of the quizzical penguin who wandered into camp in the morning trying to assess his new neighbors and asking what had become of the neighborhood. And then there was the beautiful and tranquil early morning zodiac ride through a bay filled with brash ice from the night’s calving activity that we rethought our skepticism.

The sad part—we were told (but did not ourselves see)—that one of our fellow campers saw a dead chick (probably the one that sought the solace of Tom’s boot the previous day) that had already been partially dismembered by birds.

Day Six. By 6:30 AM, before those on the ship had even gotten their wakeup call, we were already back on the ship and preparing to take our long-anticipated, desperately needed showers. After a quick breakfast, we prepared for our next adventure—a Zodiac ride through Paradise Bay. But, although the glacier-lined and iceberg and brash ice-filled bay is certainly beautiful, it was named not for its scenic majesty, but for whalers’ joy in finding a sheltered, safe harbor in which they could ride out storms.

Our visit began with a beautiful, but ultimately disappointing zodiac trip which began along the sheer bayside cliffs (a favorite nesting spot of cormorants, shags, terns and sheetbills) that boasted a fascinating type of turquoise-colored algae that is only found in the Andes (and in this case, one of the southernmost extensions of the Andes). We cruised through fields of brash ice and about 200 meters away from the walls of tongue glaciers (steep glaciers, long glacial walls that flow so quickly (at least relative to other glaciers) that they extend directly into the water, rather than calving as to slower moving glaciers that reach the water through narrow channels.

The disappointing part was that while the other zodiac drivers felt quite comfortable in taking guests close to the geometrically-shaped walls (parts of which Joyce associated with some of Picasso’s more abstract pieces), our driver was uncomfortable, insisting that we get the same view from a distance. Many of these glaciers, since they move so quickly, are very young—so young that the distinct layers of snow from which they are composed have not yet been fully compressed. We also saw a number of playful penguins skipping through the water and in the distance, the spout from a humpback whale. 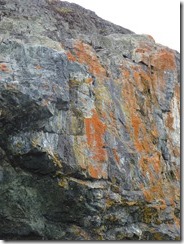 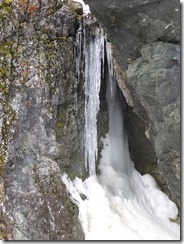 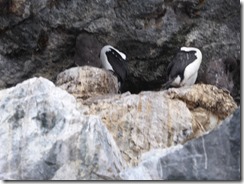 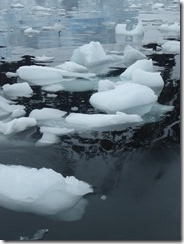 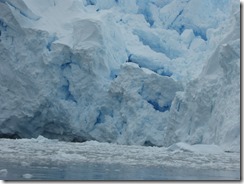 We then landed at Base Brown, another stop on the mainland with an Argentinian Research station that was first opened in 1951. The hike was steep enough that those few intrepid soles who sought to take it usually had to go up on their hands and knees, and slide down on their backs. Moreover, since the snow had not yet compressed, many steps resulted in hikers sinking into snow above their knees. After our camping trip, we weren’t quite up for this. We, therefore, climbed only a short distance to a view point over which we saw not only the bay and the research base, but also a handful of fun-loving younger visitors take running starts before launching themselves, on their stomachs, down the steep hill. 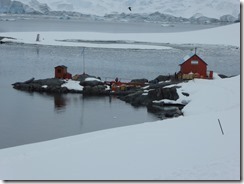 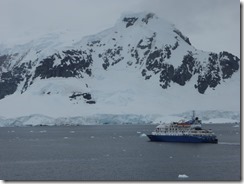 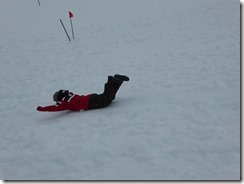 Then back to the ship for an afternoon cruise to Port Lockroy with its interesting historical museum and Antarctica Post Office (for $1, you could send a postcard which takes approximately 1 month to arrive home), and a skip next door to Wiencke Island’s Jougla Point. Port Lockroy was established as a secret British naval base in 1944 and as a permanent post intended to establish British territorial claims. It was converted into a meteorological station and, after being abandoned for over 30 years, was renovated as an interesting, well-documented historical site with a tourist post office and gift shop. 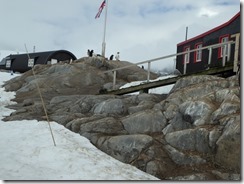 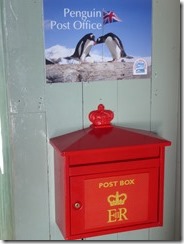 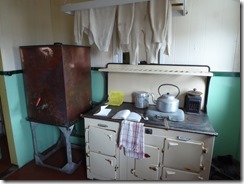 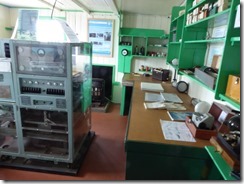 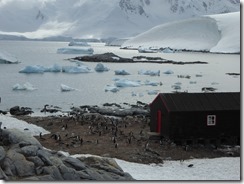 The island also happens to be a popular Gentoo establishment, with the birds having free run of the island (albeit with little curiosity about the museum or interest in the four people who staff it during the summer). They did, however, take interest in each other. This is particularly the case for one male that found another to be so irritating or threatening, that he not only chased him away from his mate and nest, but across half the island. They ran at such speeds (for penguins) that both ended up slipping and tripping along the way, rapidly recovering and continuing the chase. When the offender was sufficiently routed, the defender turned and began waddling back home.

Jougla Point, meanwhile, is a large rookery where we also saw whale bones just emerging from the snow. Both islands provide great views of two of the highest mountains on the peninsula and a bay that is littered with great wind and sea-carved icebergs. 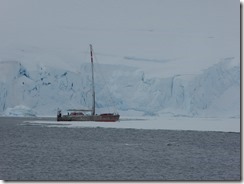 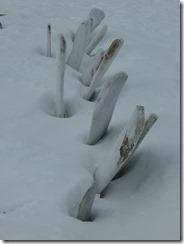 Our next blog concludes our Antarctica expedition adventure.