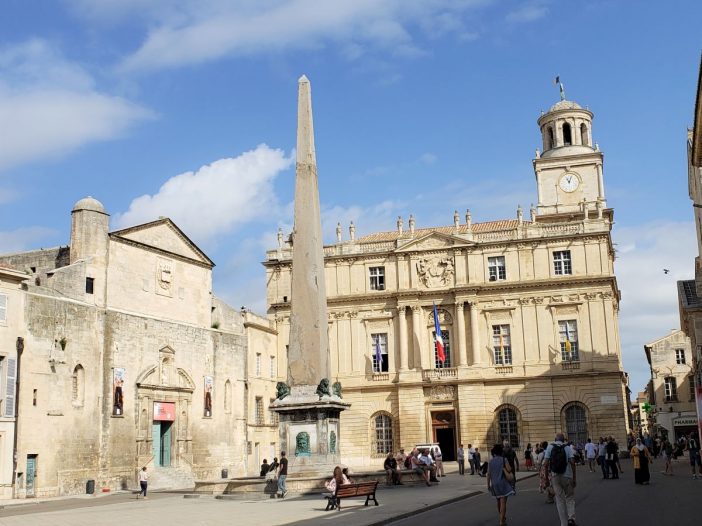 Arles France is a coastal city in southern France. It was initially settled in 800 BC and became an important trading post. The Romans captured it in 123 BC and grew it into one of the empire’s largest and most important colonies. By 395 AD it had a population of over 75,000 and became the capital of the Western Empire.

Arles was a major port before silt from the Rhone River clogged its ports and filled the land and wetland to the south Camargue region.

Roman Ruins Abound In Arles. Which To See

Arles has hundreds of ancient Roman monuments. No wonder it is a UNESCO world heritage site. Most of the ruins are within walking distance in the city. You can purchase individual tickets to enter individual ruins or a more economical combination ticket for visiting numerous sites.

The following are the most important and best preserved.

Les Arenes is a Roman amphitheater that was the largest Roman building in all of Gaul. This 446 x 351 feet arena was built in 90 AD. It could accommodate over 20,000 people to watch chariot races, gladiators, and other forms of violent entertainment. It has undergone continual renovations since 1822 and is currently used to host Spanish bullfights and Camargue “bullfights” where the objective Is to pull a string from the horns of specially bred Camargue bulls (see below).

Near the amphitheater is a smaller, 2,000-person stadium that hosted, and again hosts cultural events such as plays and readings. It was built in 12 BC (about a century before the amphitheater and was used mostly for entertainment (i.e., theater). Although little of the over 100 original Corinthian columns, two are still visible, as is the circular seating.

The Cryptoportiques is the basement of the Forum (the huge Roman marketplace) at the center of the city. This huge network of underground galleries dates from the first century AD. Ventilated by airshafts, they were probably used as granaries. Although the galleries are long virtually dark empty tunnels, they do contain one sculpture, a bust of Julius Caesar.

This partially reconstructed ruins of a huge (over 40,000 square feet) public bath that was built in the 4th century BC. Underground heated circulated hot air under the floor to heat the water. Over 3,000 people of all social classes could be accommodated at one time. It was a popular place that was used as much for social aspects as well as for bathing. Many of the bathers followed medical regimens of exercise and the order and amount of time spent in different temperature baths.

This large cemetery was the city’s burial ground for about 1500 years. It is one of the largest cemeteries in the Roman-era Western world and is lined with marble sarcophagi of important regional citizens. When we visited, it was hosting a Lee Ufan conceptual art exhibition, appropriately named “Requiem”. Items on display included a stainless steel arch and walkway and tanks filled with water and soil. The most interesting display was a stone room whose floor is covered with black slate that makes a crackling sound when the tiles hit the floor from walking on them.

Approximately 7 miles northeast of Arles is a Roman watermill complex that is thought to be the greatest known concentration of mechanical power in the ancient world. It had 16 water wheels descending a steep hillside that operated in the 2nd and 3rd centuries.

Arles is More Than Ruins

Arles is known as much for its art as for its impressive Roman ruins. Much of its artistic fame is attributable to the years that Vincent Van Gogh lived in the city and where he painted many of his best-known works. Yet its artistic heritage has a much longer history and is represented in three major art institutions.

The museum displays a large collection of Roman sculptures including a bust of Julius Caesar, a statute of Venus, an altar dedicated to Zeus, and a well-preserved, 102-foot long flat-bottomed wooden Roman river barge.

Housed in one of the city’s 15th-century mansions, the foundation examines the artist’s influence on future generations of painters. Although we were tempted to visit just because it was Van Gogh, it does not house any of his art. Besides, our last trip to Europe included hours in Amsterdam’s large, comprehensive Van Gogh Museum. But if you want to learn more about Van Gogh, it is a good stop.

This Frank Gehry-designed metallic landmark is the centerpiece of a 20-acre complex of galleries, theaters, studios, and workshops for all types of contemporary art. It also has a park with mosaic sidewalks and public art.

The large, ornately decorated St-Trophime Romanesque church is also worth a stop as are its cloisters. It contains some of the finest examples of Romanesque sculpture.

We only had one meal in Arles. And the restaurant was as impressive as the food.

L’Arlatan is the most dramatically and extensively designed restaurant we have been to in a long time. You enter through intricate latticed metal doors to rooms with ornate floor tiles, woven paper light fixtures, and artistically patterned walls. Heck, even the restrooms are pieces of art. So too is the mosaic bottom of the hotel’s swimming pool.

As for our lunch, Tom had a very nice piece of roasted veal loin with grapes, au jus, and bulger. Joyce a chicken club sandwich with cheese, lettuce, tomato, and for our tastes, way too much mayonnaise and mustard. But it came with a large serving of wonderfully crisped French fries. We both had our standard lunch ice teas, with Arbatan’s being tropically flavored.

South of Arles, the delta of the Rhone River has created the largest wetlands in France. It is 424 sq miles of wetlands, dunes, salt flats, 20+-foot tall salt mountains, sandy beaches, and pastures. It is home to a unique combination of flora and fauna. Flamingos feed and nest here. And it is pastureland for herds of small, white Arabian horses and large Provencal black bulls.

Although we attempted to drive down to the shoreline, we were deterred by a traffic jam that just would not move. This being said, we did see acre upon acre of farmland (much of which was covered by over-the-hill sunflowers and marshes). We made a brief stop at Musee de la Camargue, a folk museum located in a former sheepfold. It uses exhibits, panels, dioramas, and videos to explain the environment and the history and culture of the region. It also has the large, partially reconstructed remains of a large Roman flat-bottom boat that was recovered from the mud beneath the Rhone.