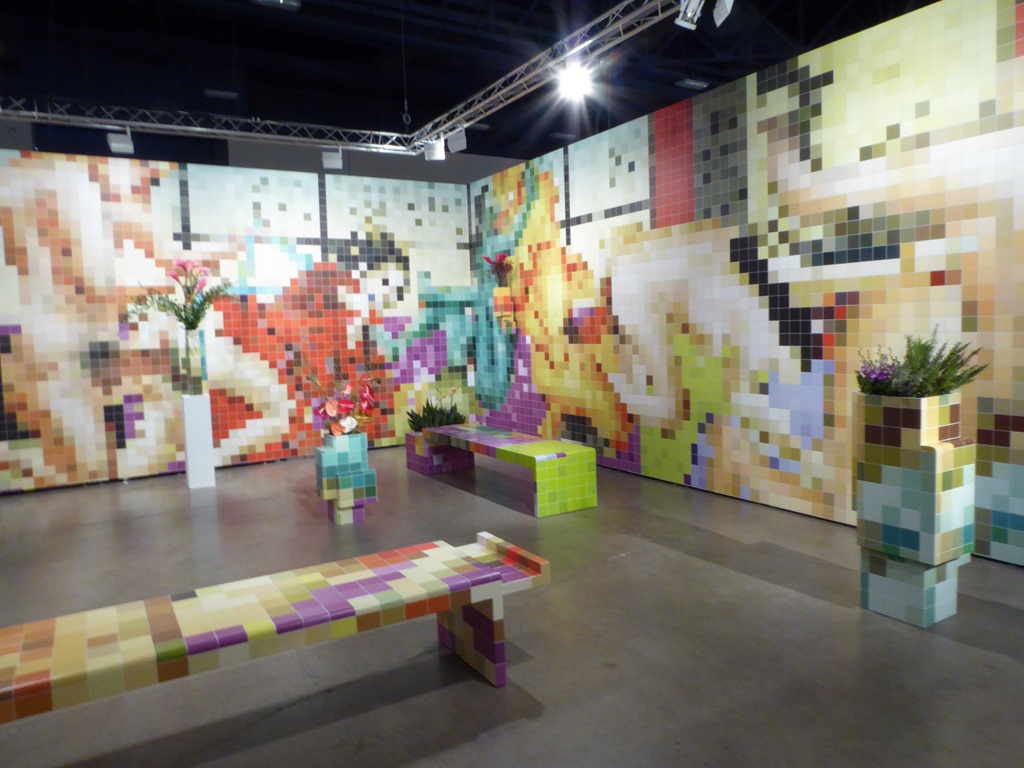 For one week each December, the fine art world gathers in Miami Florida for Art Basel Miami, probably the most important art show in the country, where dozens of the world’s largest, most exclusive art dealers display, and hope to sell, their premier pieces. This was our second visit to the show (see our blog on our 2012 visit).

We saw (but resisted the temptation to buy) thousands of pieces that ranged from the sublime to many that left us puzzling over what would possess one to create, much less purchase and display them in their homes. There were works by a number of the 20th-century masters, such as Picasso, Matisse and Miro. Most, however, were by some of the world’s most renowned contemporary artists.

Some were full, room sized installations, such as Tobias Rehberger’s tiled room, and series of petite pieces, including a display of hundreds of bronze teeth, each hand-made from a cast of an original tooth. Some of the pieces were sublime, or at least they appeared do to us. We particularly liked Albert Ohlen’s multi-colored acrylic and Picasso’s enticing black oil sketch of the outline of Marie-Therese Walter’s head. 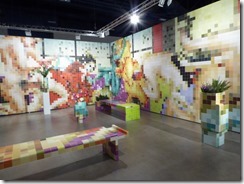 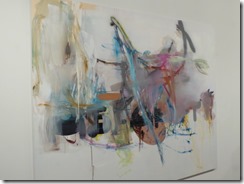 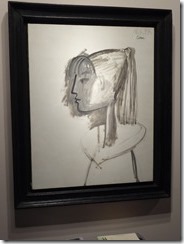 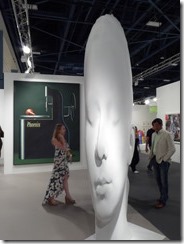 But what is the meaning of the car crushed by a boulder, or a basket covered by men’s jackets and sweaters and containing an outsized saxophone and broken ostrich eggs, surrounded by shards of broken china, old buttons and rusty springs? Or the upside down tree base with a sword plunged through it and kitchen utensils hung from its roots? And what about the photo and oil painting of a man handling his erect penis? And if you like this, perhaps you would be interested in the five, almost life-size panels of women performing fellacio on giant penises? It would be a great conversation piece in a corner of a lucky buyer’s living room. 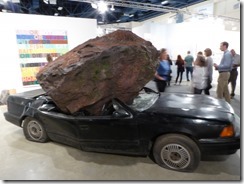 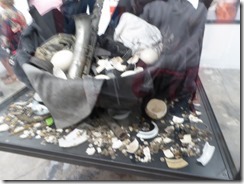 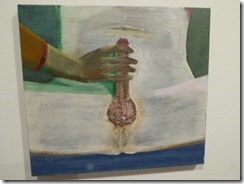 Although the Art Basel is certainly the premier show of Miami Art Week, it is by no means the only one. There are 40 satellite shows and venues across the Miami area, from the top to the bottom of Miami Beach and throughout Miami, especially in the city’s main art areas of Wynwood and the Midtown Design District. We visited several of these other shows and venues over our three days in the city. Although the art displayed at these satellite shows tend to be from lesser known artists–and also less expensive–many pieces are just as innovative and thought-provoking as those selected for Art

Among the more interesting venues and pieces we saw were at:

The Scope Show has some particularly intriguing works, including a photo of a woman, whose hands portrayed her face; a kinetic sculpture in which sound was made visible through strings vibrating at various frequencies; a naked man writhing in agony beneath a watching policeman, and our two favorites, Zazuhiro Tsuji’s striking platinum-cured silicone and resin sculpture of Freda Kahlo with a super-realistic head and gracefully stylized body; and Eva Penny’s show-stopping, sculpture of a man’s chest with a head that was so realistically stretched and narrow as to appear surreal. And then, as if for comic relief were sculptures of a pair of pouting babies with oversized heads, and an oversized, inflated plastic jack improbably balanced on one sand-filled foot, which could be tilted or rotated with little more than a gust of wind. But what’s with the life-size sculpture of two men in rabbit suits, sitting at a table autographing photos of themselves? 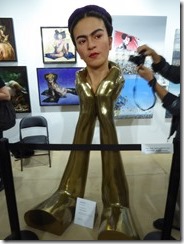 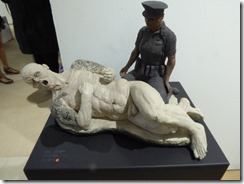 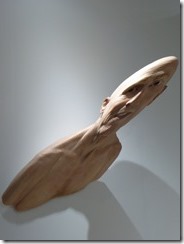 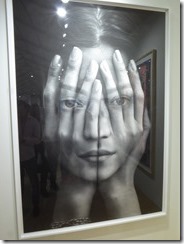 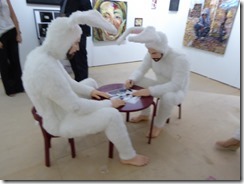 The Untitled Show, where we were particularly intrigued with a sculpture that consisted of hundreds of Architectural Digest magazines pasted together into a block, with their pages carved into the shape of a steep, rugged ravine, as you would see in the southwest and a psychedelically-painted wall. 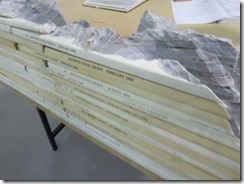 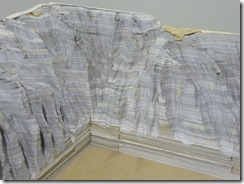 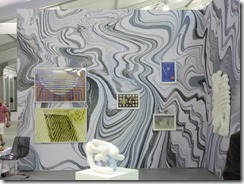 Ink Show, which is primarily dedicated to prints, is one of the few still held in a hotel where each gallery has its own room. Among our favorites were prints by Christian Mauclay, Iva Gusorguieva’s “Stained”, and a couple of Peter Milton’s backlit transparencies (especially “Tsuunami”) . And not to forget a roughly 4-inch by 10-inch scrap scrap from Jackson Pollock that was priced at $65,000! 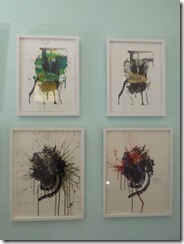 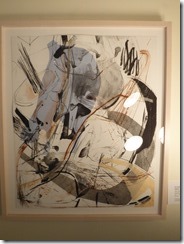 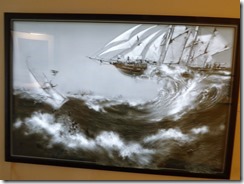 Pulse Show, where we arrived for Saturday evening’s Sunset Celebration. Although the party was supposed to be on a roof deck bar overlooking the beach and the ocean, the rain brought it inside. Our walk through the show was still accompanied by beer, a festive arch and a pair of roving opera signers with the woman singing contralto solos being a particular hit. Although we enjoyed the environment, there were few pieces that particularly drew our attention. Of these, our favorite was Russell Crotty’s “Outpost Two” acrylic. 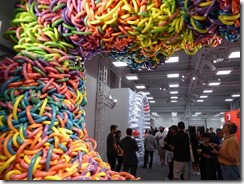 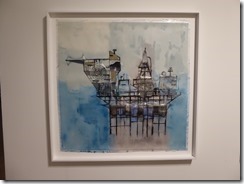 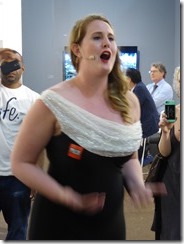 Spectrum/Red Dot Show, where we were particularly taken by a number of sculptures. Among the many were Tolla’s (Circle of Life”, Thomas Wargin’s “A Ride with the Angel of Death” and one of his kinetic pieces and a few of Paul Heller’s Stained Glass musical instruments, especially his drums and piano. Among our favorite wall pieces were Gregg Minerva’s mixed media “Weathered Away” and Jeff Vermeeren’s “Abstraction Unbridled”. Then, tucked into the middle of all of the abstract and a few hyper-realist pieces we have been seeing for the last couple of days, we unexpectedly spotted Juan Fernando Silva’s Van Goghish, quasi-Impressionist oil, “Odysseus and the Sirens” 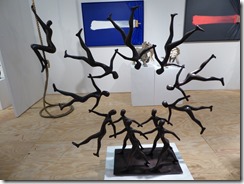 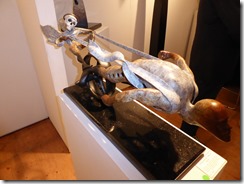 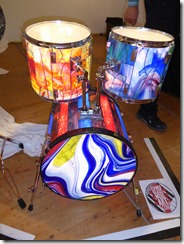 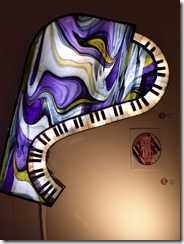 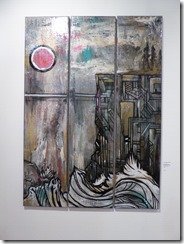 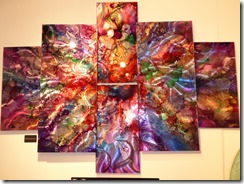 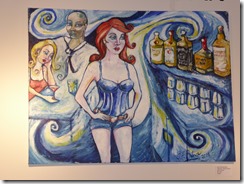 While the art was nice to see, we found this year’s show not as interesting as in past years. Why? The favorite part of our last visit was the large number of hotels that turned their rooms into artist galleries for the event. As these were less expensive venues, the rooms contained work of lesser-known artists. As hotels in the area rennovated their rooms, they were less interested in turning them over to the artists for a reasonable fee for the event. As a result, the artists moved way north to an area that was too far away for us to travel to for the number of artists that still remained. Too bad as this was where you could find newer talent at reasonable pricing.