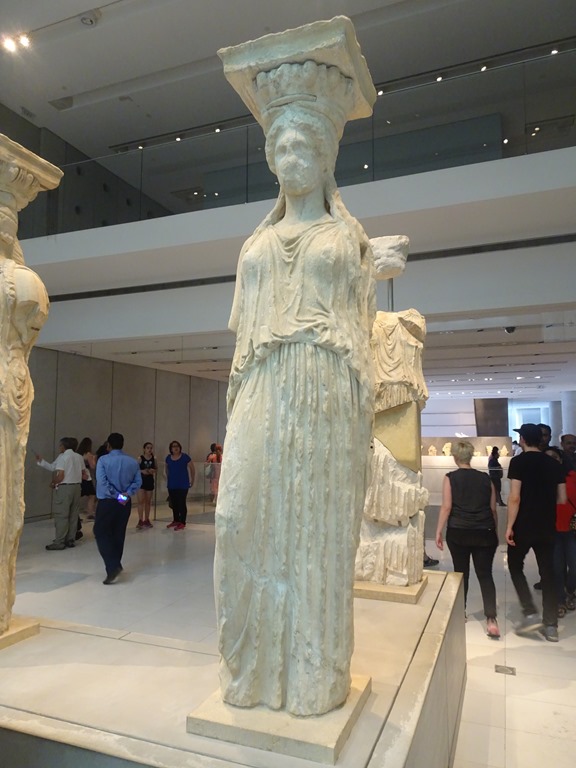 Tom has been fascinated by ancient Athens since his Western Civilization and his second and third philosophy Courses (on works by Plato and Aristotle, respectively). Although it was one of the first European destination we had visited (would you believe 1979?), we have not been back since. We finally returned, after a lapse of a mere 39 years! As we thought, much has changed (you think?)

We stayed in a residential area a few minutes from the Plaka, the city’s oldest, and probably its most touristy neighborhood. However, it is loaded with restaurants and clubs, close to many of the historic sites we planned to visit, and near two other neighborhoods in which we planned to spend time, especially Psyrri and Monastiraki. It seemed like a good place from which to explore.

No surprise. We spent most of our time at some of the primary historic areas.

The Acropolis Museum is a stunning, modern, glass-sheathed structure that not only displays artifacts from the Acropolis, but also rests upon a glass floor that preserves and allows the viewing of the ruins of an ancient (primary about 5th centur AD, although part of it is significantly older) Christian settlement that used to occupy this same spot. The museum’s collection is divided into several sections (some of which did not allow photos):

The first level provides an overview of the instruments of everyday life in ancient Greece, including pots, plates, artifacts from home shrines and so forth. 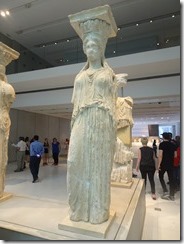 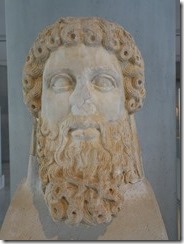 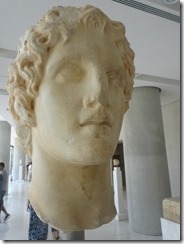 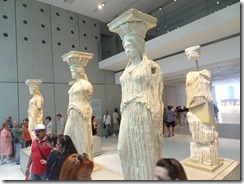 The Archaic Collection, the introduces the history of Ancient Athens and the art of the initial role of the Acropolis (Archaic Acropolis) and noble Athenians from roughly the seventh through the fifth centuries B.C. This begins with an overview of the pantheon of Greek gods and demigods, their reign atop Mount Olympus under Zeus and especially the birth of Athena and how she became the symbol of and protector of Athens. It progresses through the period in which the foundations for Athenian democracy, educational achievement and culture were laid, beginning with the reforms instituted by Solon and expanded by some of his successors. It explains and provides some extraordinary artistic examples of the history of the use of the Acropolis as a site of temples for the celebration of and for providing offerings to the gods. This includes the initial roles and evolution of Korai (female) and Kore (male) statues and the extensive use of color not only for aesthetic and decorative purposes, but also to represent the element of the universe (air, water, fire and earth) and human attributes (including power, grace and bravery). It also details of the destruction of much of Athens and the Archaic Acropolis by the Persians in 480 B.C. before they were finally defeated in a pair of battles (the Land Battle of Marathon and the Naval Battle of Saramis). It then explains what became a fallow period for the rock, during a period of remembrance of the fragility of Athenian independence and freedom. Interspersed through all of this exposition are incredible examples of Archaic Acropolis art and architectural detail (which cannot be photographed) that was, paradoxically so well preserved by its destruction, which the Athenians then buried before constructing the modern Acropolis.

The “Modern Acropolis” period began with the ambitious initial plans for rebuilding the Acropolis (a vision which was delayed and reduced in response to the 431-404 B.C. Peloponnesian War) and the emergence of its primary structures: the Propylaea (entrance), the Erechteion (the most sacred site), the Temple of Athena Nike (which commemorates the city’s victories over the Persians) and of course, the Parthenon (that celebrated Athena with a huge, ivory and gold statue). It examines Pericles’ schemes for funding the creation, the seven years required to build and the two years to decorate (statues, paint, add metal decorations to) the Pantheon. The gallery, which is the first to allow photographs, provides examples of art and architectural detail from these structurers. Interspersed are detailed panel that explain the history of Athens (from its initial settlement as a separate villages in the 13th century B.C. (and that of the Acropolis) in much greater detail and that explains the history of both since the initial construction of the modern Acropolis. This details the city’s multiple subsequent wars and the times in which the hill’s temples were destroyed and rebuilt. These include, but certainly aren’t limited to:

And all throughout, portrayals of the ways in which conquering powers (especially Rome), other Hellenistic city-states and modern countries have contributed to the construction and reconstruction of Athenian landmarks in honor of the city’s creation of democratic or artistic ideas and especially its tradition of education and learning.

The Parthenon Gallery occupies a small space in a mezzanine level that provides scale models of what the full east and west pediment of the Parthenon would have looked like and a movie that describes its history (of destruction and rebuilding), its aesthetics (including it scale, perspective-altering tricks), ornamentation and paint and so forth) and its ongoing reconstruction and renovation. 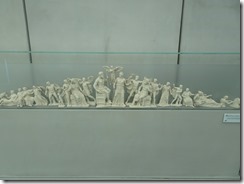 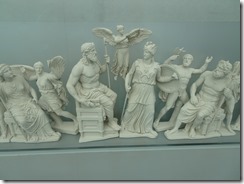 And then there is the third floor. This provides a view of the Acropolis and an indoor reconstruction of pediments of the Parthenon that uses a combination of marble (actual remnants from the Parthenon), plaster (for reconstructions) and blank spaces to represent the psychic wounds of the Elgin marbles, which remain in London. They provide representations of the iconic, high-relief East (scenes portraying Athena’s birth) and West (Athena’s contest with Poseidon for control of Athens) pediments, as well as those of the longer North and South (the Panathenaic procession and Athen’s actual battles (especially with the Persians) and mythological battles as with the centaurs and the Amazons). 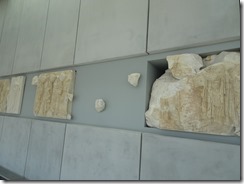 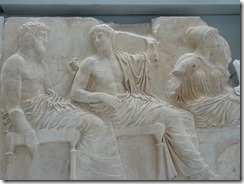 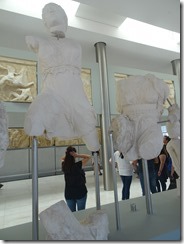 The Acropolis is so iconic that the Athenians effectively let it speak for itself. And as beautiful as it is during the day, it is even more magical at night. 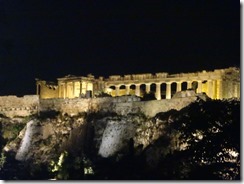 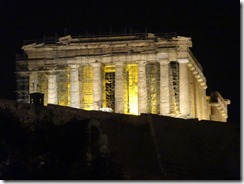 Although it has a few interpretive panels, the vast majority of detailed interpretation must come from either the museum or from books. The rock itself, primarily provides opportunities for admiration, inspiration and reflection. We began our exploration on the lower southern slope, at two theaters: 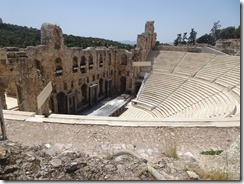 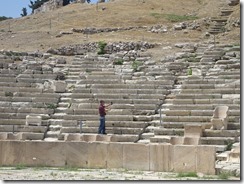 Proceeding up to the formal entrance of the Acropolis, we reach: 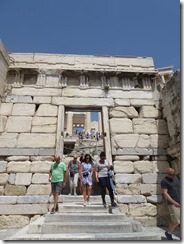 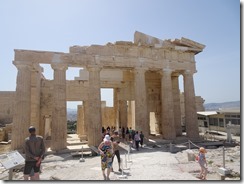 Once inside, you are faced with the: 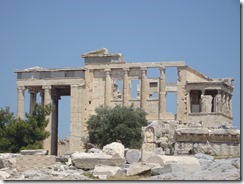 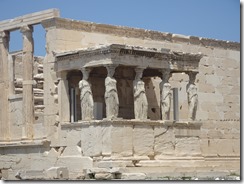 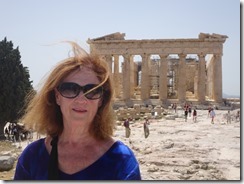 While the Acropolis looked just like many of the pictures we have seen, seeing this in person, seeing it at night with the beautiful lights, and walking around it is truly one of those great experience and makes you realize that you are only a pin point in time.