Before we get into some of the interesting areas in Central Australia, we have to first talk about Australia’s outback. This is a vast land filled with a lot of nothing other than miles and miles of red sand, spiniflex grass and hardy scrub buses and small trees. And of course, it is hot—very hot—with springtime temperatures often reaching 100 or 110 degrees. And need we say, it is very, very dry. Water is a necessity. Lots and lots of water. And gas? Don’t even think of going anywhere without a full tank of gas (expensive gas—often the equivalent of $7.00 to $9.00 per gallon).

Driving 300 to 500 kilometers among sites or population centers is nothing. The good news is that there is usually very little traffic. Speed limits are typically about 110 kpm on most open roads, and even higher on some (130kpm). The bad news is that the shortest distance between sites is almost never via paved road. It is usually a dirt road that may, or may not be graded a couple times per year. They are often like washboards and incredibly dusty. Approaching a moving vehicle is literally like flying blind. And don’t even think about taking an ordinary car on them as you have to take spare tires.

And these are on the good days. During the rainy season, flash floods are the rule. Even the best of roads usually have “Flood Zone” signs every several miles—even on the paved roads. Some have measuring sticks showing the depth of water on the road and marks that indicate historic maximum water depths. These are often between one and two meters. And then there are the feral camels (from the days when old camel trains were the main mode of transport) and kangaroos that can jump out in front of you at any time and destroy your vehicle.  We often passed dead kangaroos lying on the side of the road. And “roos” can be heavy. They can do serious damage to the most solid of cars, and this does not even consider when they are jumping high enough to hit a windshield. Interesting that our rental car agency told us if we hit an animal during the day, we are charged $7,000 AUD and if we hit one at night, it is double.

And this is on major paved roads. Unpaved roads are devastated during rainy season. And if you get stuck or are in an accident (a not uncommon prospect), you can go days before you are found as cell phones are useless.

Not surprising, four-wheel SUVs are the primary mode of transport in the outback. And we’re not talking about any SUV. These are big honkin’ SUVs—monsters that come equipped with large radio antennas, Roo bars and racks on top that often accommodate two spare tires, two large plastic gas cans and an emergency kit with day flares (smoke), night flares (flame), medical supplies, emergency food and water and a large, brightly colored tarp to put on the roof to signal helicopters and search planes. And in case of a flood, the well-dressed SUV also sports a roofline-level snorkel to ensure the engine is continually supplied with enough air. Whew, interesting to see and be in for a short while, but we’ll take the more populated areas thank you. 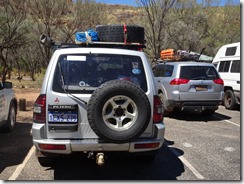