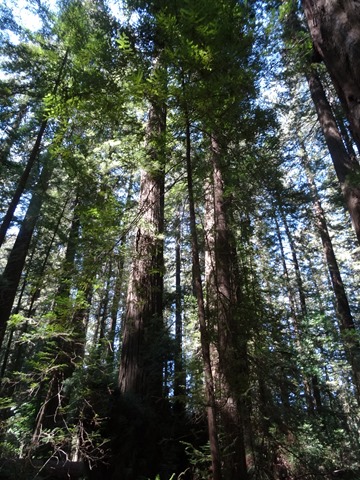 Our drive through Northern California to Eureka took us through Humboldt Redwoods State Park, the largest remaining grove of first growth redwood trees in the country. All it takes to get a chance of these incredibly impressive trees is to exit from Rt 101 to the Avenue of the Giants, which runs right next to, and offers about a half dozen options for getting back onto the freeway over its roughly 30 mile length. Although the drive town the avenue takes you through the middle of some magnificent grooves, you get much more from the visit by stopping at a few sites and walking through the middle of a grove. Since we left the races much later than we had anticipated, we had to pass on the visitor center and most of the stops we would have liked to have made (although we had made these stops on previous visits). We had time only for a leisurely walk through the magnificent Founders Grove and a very brief visit to Rockefeller Grove. 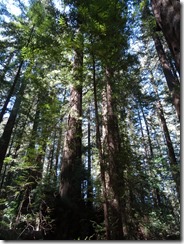 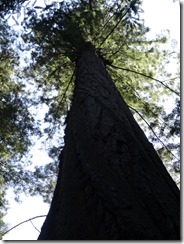 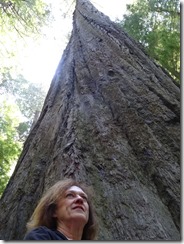 These brief stops provide a great introduction to the majesty of the 2,000 year-old, 300+ foot tall giants. You see old growth trees that faced the ravages of forest fires, with huge burned out gashes that hollow out more than half the base of the tree. In some cases, the gash goes all the way through the base. But still, the tree continues to stand and grow. 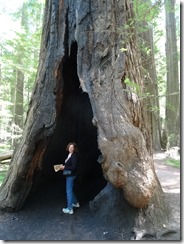 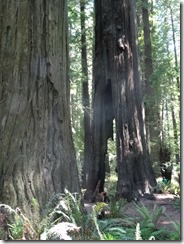 You see other trees that weren’t so lucky; falling victim not to fire or insect infestations (both to which the trees are practically immune), but to rain (which softens the ground and weighs down the branches), and high winds (which tear the large root networks from the softened ground. One such fallen tree is the Dyerville Giant, a 52-foot circumference, 370-foot tall tree (the height of a 30 story building) that was felled by a 1991 rain and wind storm when another giant tree, which had recently been knocked to an angle by another falling tree, later fell into the giant. The crash of the million pound tree was so powerful as to register on seismographs throughout the region. 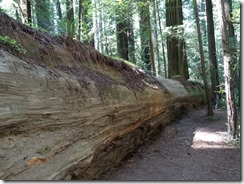 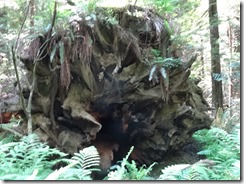 Life, however, continues in an ecosystem that contains seven times the biomass of a tropical rainforest. first, the fallen giant opens up the canopy and allows sunlight to pour down upon hundreds of smaller trees that hat take root, but had been deprived of the sun required to grow. Second, as the fallen tree begins to deteriorate, it becomes a “nurse log”, providing a platform and the nutrients that seeds require to grow. During the 300 to 400 years it takes a fallen tree to completely deteriorate and be reabsorbed into the soil, it can give birth to hundreds of other trees and bushes. Some experts, in fact, estimate that over this period, more than 4,000 different plant, insect and animals species will have gained sustenance from that one fallen redwood. 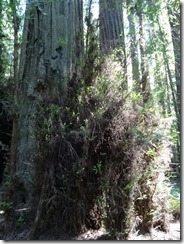 In reality, the 2,000+ year official lifespan of a redwood is only part of its productive life.

Benbow Inn (Benbow). Although we had lunch at this lovely, historic (first opened in 1926, since which it has hosted movie stars, presidents and royalty) inn on a previous trip, we had never stayed or eaten dinner there. We decided to do both this trip. 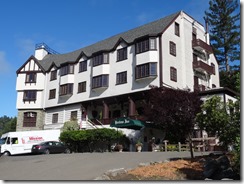 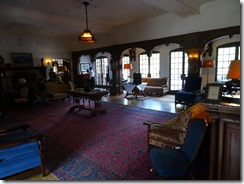 Dinner was a disaster. After waiting 20 minutes at a terrace table, someone finally came to ask if someone had sat us or if we had taken the table ourselves. (We had checked in for our reservations and were seated.) He then assigned us a server. Although we ordered a 2008 Malbec Reserve, the wine we received was a 2012. After questioning the server, we decided to accept it (which was our mistake). Out of curiosity, we looked up the wine for which we paid $50 to discover that the 2012 had are tail price of $12! What a markup. Things only got worse from there. Although less than one third of the tables were occupied, it took another hour for our meals to arrive. Although Joyce’s salmon was not very tasty, at least it was prepared almost as she had requested it (medium rather than medium rare). I was less lucky with my rack of lamb, which came out well done, rather than medium rare. When we asked how long it would take for a properly cooked order to arrive, we were told about 30 minutes! By that time, we had already been seated for an hour and three quarters. After a small taste, I decided against paying almost $50 for a dish I would not enjoy. No options were given, no offered made. I had some of Joyce’s and we asked for the check. While our server “graciously” told us she had not charged for the lamb, there was no apology nor explanation for the experience; just the check for what we had eaten and drunken.

As for the room, it was spacious, but tired. Front desk service was only a little better than the dinner service. Chalk Benbow off our list!