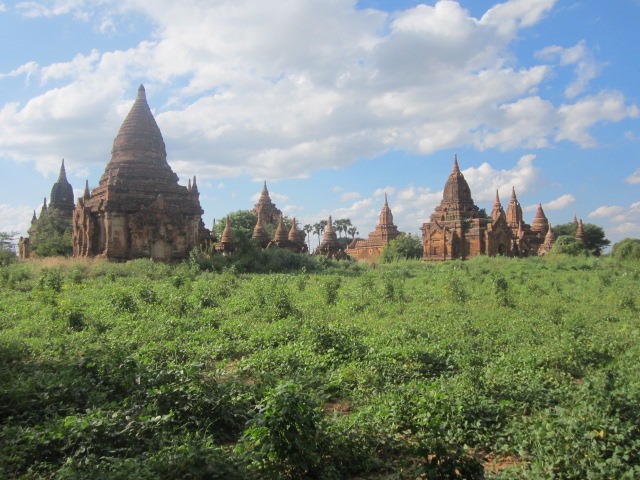 Bagan is an area of temples…over a thousand of them. Big, small. You name it. And to visit any of them required removing your shoes and walking barefoot in to explore them. Not that we are complaining. Sometimes the cool tiles on your feet in the hot weather felt good. Other times, our feet were not used to stepping on a hard pebble that made it ways in our path. Still, this was an amazing place and Bagan is a must-see destination.  Don’t let the articles turn you off. While there are not ATMs that take foreign cards,some of the more tourist places will take

Bagan had been a major trading center since the 1st century and a major dynasty through the 13th, under the reigns of 55 different kings. Although much of their legacy has been destroyed, four palace sites and 3,122 buildings (a combination of pagodas, stupas, temples, ordination halls, monasteries and learning caves) remain. So does some of their art, in the form of murals, stone and stucco carvings, terracotta and glazed relief plaques. Most of this cultural, religious and historical treasure trove,which are located in a 20-square-mile area, were constructed between the 10th and 12th centuries

This makes Bagan the second largest collection of such antiquities in the world, second only to Cambodia’s Anghor Wat (which we will revisit and write about over the next couple weeks).

The problem is the government. In an attempt to expand tourism, it took a heavy-handed approach to repairing structures damaged by a 1975 earthquake and to rebuilding those beyond salvage. Rather than complying with standard historical renovation practices, it used unskilled workers to repair and rebuild these treasures with cement and other cheap materials. Replicas of destroyed monuments are, according to a September 2012 Conde Nast Traveller article, are being built with architectural details that are centuries different from the original. As if this weren’t bad enough, they built a golf course, an inappropriate museum and a landscape-scarring 200-foot observation tower in the UNESCO World Heritage Site Archaeological Zone. Fortunately, we were able to escape some of these atrocities.

For all the misguided efforts at enhancing tourism, Bagan remains one of the world’s true historic and cultural wonderlands. It is technically divided into three towns:

After a ride from the airport during which we were continually craning our necks in different directions to capture yet another view of some of the many old temples in the area, we arrived at our Old Bagan hotel. After a quick lunch, we negotiated for and took a three-hour horse cart ride where we visited about a dozen temples on the north end of the town. 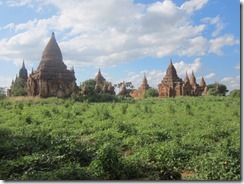 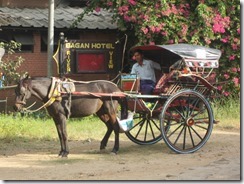 Some, such as Thatbyinnyu and Shwe Gu Gyi Phayas were indeed lovely. Just as impressive were groupings of five to ten smaller stupas and phayas. One, however, almost took our breath away.

Annada Phaya is the tallest in the area and is topped with a gold, multi-tier square pagoda. You enter through an arcade filled with shops in which you can buy offerings. Then, when you finally enter the phaya, you come face to face with a large, beautifully crafted and expressive standing gold Buddha. You can follow a maze of passages to similarly impressive standing golden Buddhas in each of the other three cardinal directions. The passages are also pocked with niches–1,024 niches to be exact, each of which contains a small Buddha.

Although the horse cart was slow and relaxing and we saw some lovely temples, it wasn’t a learning experience. Our driver could give us the names of what we were seeing, but not much more. 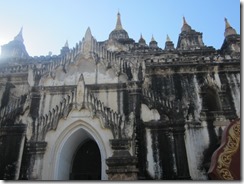 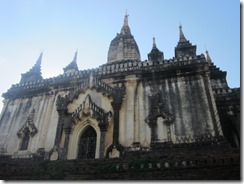 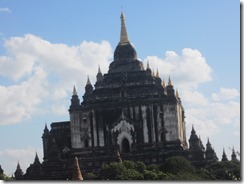 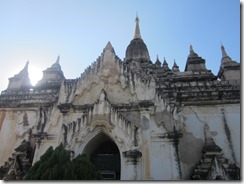 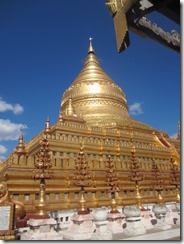 We read and were told that the sunset cruise on the Idrrawaddy River was a quintessential Bagan experience? However, we found it a total waste of time and money. You get to the beach, haul yourself up onto a boat on which a table is set with a pot of tea, and sit hour about  hour, straining to see a few phayas in the distance and waiting for the sunset. When it finally comes, you snap a couple pictures, take a ten minute cruise back to shore and proceed to your next matter of businesses. While the sunset maybe pretty, you can see it just as well from the shore, and without the investment in time or money. As we were staying at a hotel on the river, we could have experienced the sunset just as well from our room, from the lounge or from the outdoor restaurant–and we could have experienced it with a drink, rather than with a cup of tea. 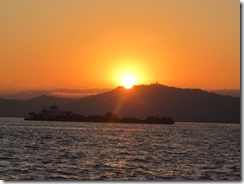 Bikes became our preferred means of experiencing Bagan as it combined a relaxing bike ride on dirt roads and lightly trafficked streets, scenic views in every direction, amazing temples and a guide who helped us understand the history and cultural significance of what we were seeing.

We began our tour in the section of Old Bagan, where many of the older temples were built, beginning with a couple 10th century buildings with strong Hindi influence and one that is even dedicated to Shiva, a Hindu god. One of these temples also had incredibly well preserved murals that survived by virtue of Bagan’s hot, dry climate.

Buddhism came to Bagan in the 11th century and the art that came with it began an evolution, such as from subdued to bolder colors and Buddhas with long necks and straight fingers, to those with shorter and shorter necks and more curved and expressive fingers in the 12th and 13th centuries.

Some of the most noteworthy stops were:

Shwezigone Pagoda, however, was the premier stop in Bagan. Built in the 13th century to house a tooth from the Buddha (yep, again, you need to have faith in how many relics of the Buddah exist) , the temple is all gold and of classic shape (three levels topped by an octagon, an inverted monk’s bowl, water filter and an umbrella). It is also surrounded by a number of newer 13th century buildings with a nice standing Buddha (representing no fear and no danger), a reclining Buddha (representing the achievement of nirvana) and a teaching Buddha. It has statues representing the old, sick and dead men, the sight of whom sent Prince Siddhartha on the quest that led him to become Lord Buddha.

Although the great temples are indeed impressive, you don’t need size to impress. Some of the most beautiful sights can beset just by drive, biking or riding horse cart along dirt roads. Handfuls of small temples pop up in the middle of fields. Or you can come upon an unlabeled group of small, ancient buildings that aren’t much in themselves, but form an impressive complex. Some of the view are memorable as much for the surroundings,as for the temples themselves. One good example was the Min-O-Chan-Tan, a group of white stupas, fronted by a small temple. While not all that impressive in and of itself, its setting, in a grove of stately palm trees, is incredibly scenic.

Here are a bunch of pictures to enjoy. 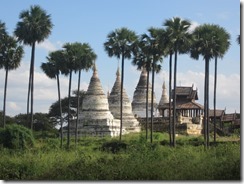 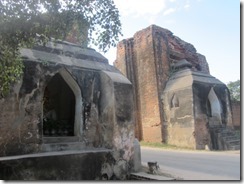 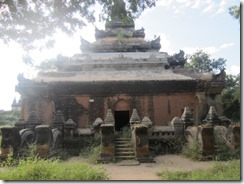 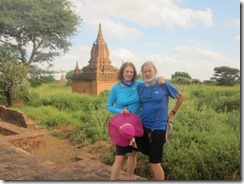 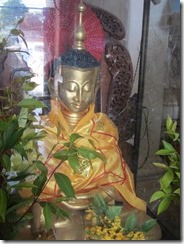 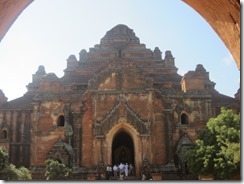 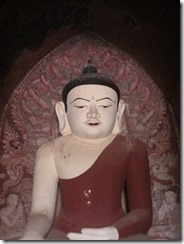 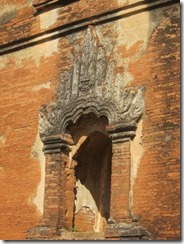 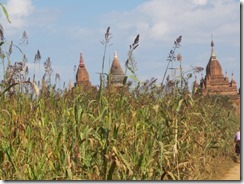 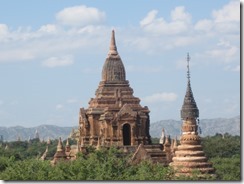 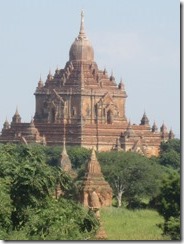 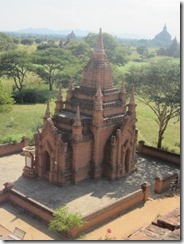 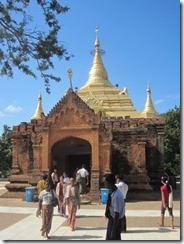 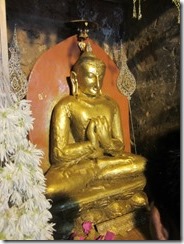 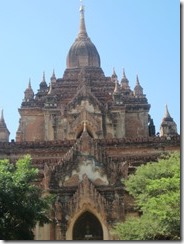 Bagan Restaurants We enjoyed a very good Myanmar meal at a restaurant that caters to locals.  Myo Myo Myanmar Food is very casual local place in which seating is primarily on plastic or flimsy metal stairs. Although they don’t offer wine, they do have beer or you can bring your own. They also don”t have a menu. When you sit down, they bring out two trays filled with perhaps two dozen small bowls of food. Each one is different and the server will provide a one or two word explanation as to what each is. The idea is that you eat whichever dishes you want and leave the rest. You are then charged for only the dishes you eat (and for the dishes you’d taste but choose not to eat). We had about half a dozen dishes: sweet and sour soup, prawn, mutton, fish, quail and fried banana with homey. Although the meats were cooked almost beyond recognition, virtually everything (especially due to the sauce) was delicious. No fuss here: just very good food served simply and plainly. And oh yeah; then there’s the price. Six dishes and two large bottles of beer–less than $10!

Queen Restaurant, at which we stopped for lunch on our bicycle trip, was less distinctive than Myo Myo, but it was also good. Joyce returned to butterfish. This came panko-coated and deep fried with a sweet and sour sauce. Tom had roast duck with pineapple and onions in a slightly sweeten duck stock-based sauce.

Speaking of food, our brief time in Myanmar did give us time to develop one new food craving.Although we love the way tamarind sweetens sauces, we never thought of eating it on our own. Good thing the Myanmarese have. They form tamarind syrup into small wafers that literally melt in your mouth: sweet, slightly tart, a bit chewy–and potentially addictive.

We also had lunch on our first day at our hotel before heading off for a horse cart ride. The open air riverfront cafe (where we also had breakfast the following morning), is lovely with a great view over the river. Our lunch, grilled butterfish and chicken with cashew nuts, was good.

Staying at the Bagan Thande Hotel

This was a lovely hotel on the waterfront that had a nice outside restaurant and outside bar, where you could sit at night and gaze at the stars. The rooms were comfortable, albeit somewhat basic. Still it had what you need. We were a little surprised that the sheets were somewhat scratchy however. But the air conditioner worked, the room was clean and the view was nice. The staff was also very attentive. Tom had a slight accident in Bangkok, hurting his foot, which ended up infected. We had to make a trip to the clinic for the doctor, who gave him antibiotics and bandages( for a whopping $43). The hotel made all of the arrangements for him to see the doctor and also watched out for Tom to make sure he had everything he needed and to try to minimize his use of his foot.