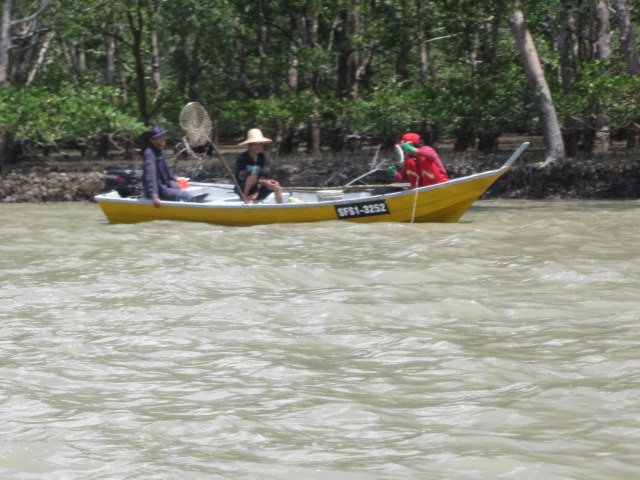 We were looking forward to our trip to our first Malaysian national park…Bako. To get there, we flew into Kuching Malaysia, and were picked up by a guide who took us to a hotel to drop off our suitcases. Then, with just backpacks containing things we would need for one night, he drove us 45 minutes to a Muslim fishing village which happened to be located on an overwhelmingly Christian island. There we transferred to a small boat for a 30-minute ride to the park. But before we could get on the boat, Joyce twisted her ankle on a small step. Not a good way to start 2 days in a park. Fortunately, it only impeded her the first night. After a good night’s sleep, she was able to move around easier.

On the boat ride to the park, we past fisherman, fishing net trellises and some dramatic shoreline. Since the tide was out when we got to the park, he had to take off our shoes and jump into the knee high warm water and wade to shore. 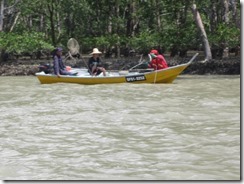 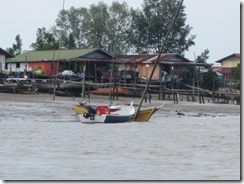 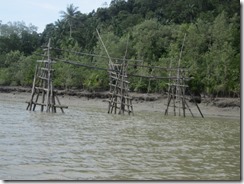 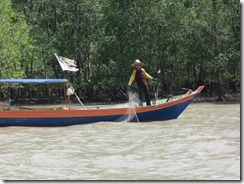 Although small (only 27 sq km), Bako offers an incredible sample of Borneo’s natural diversity. The sandstone peninsula, created by the tectonic uplifting of the seafloor and millennia of water and wind erosion, has beaches, mountains, sandstone cliffs, boulders that gradually disintegrate into the sand from which they were created, and mangrove, palm and hardwood forests. Two of the most dramatic geological features are the many-shaded, weather-sculpted sandstone cliff faces and the dramatic sea stacks.

The park also includes virtually every type of vegetation found in Borneo–from delicate orchids and rattan trees to sturdy ironwood trees (which are used to make furniture) and sharply-spiked palm trees. And then there were the lovely, but deadly carnivorous pitcher plants that catch and eat their own insect-based meals. 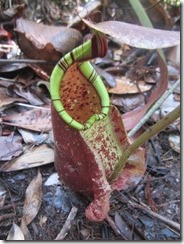 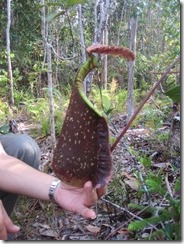 The fauna is almost as diverse as the flora. The park claims more than 100 species of birds, 24 reptiles and 37 mammals. Reptiles include crocodiles and water monitors, both of which can grow to over six feet in length. We never saw either of these.

As for monkeys, the park has long-tailed macaques (which are universally referred toss “cheeky” as they will go into your rooms if you leave a window open and steal anything) which are everywhere they might find food–and are fast and resourceful enough to get pretty much anything they want. Proboscis monkeys–named for their huge noses–are much more docile and reserved. They typically remain in trees where they can find an ample supply of leaves to feed their huge pot bellies. Silver-leaf monkeys, meanwhile, are downright reclusive and seldom seen. 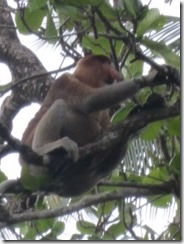 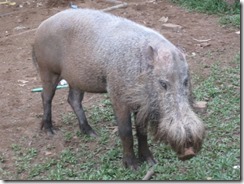 The animal life, however, goes far beyond reptiles and monkeys. The park contains a huge number of exotic animals, many of which come out primarily at night. These include small mouse deer, civets, flying lemur, pit vipers and colorful, sometimes poisonous tree frogs. On our night walk, however, we considered ourselves lucky to see large, shiny green spider. Exotic, yes. But not quite what we were hoping for.

Our day hikes were more productive. We saw all the macaques and bearded pigs (which are very ugly) we would ever want to see and a fair number of proboscis monkeys. We also saw a couple of the more difficult to find creatures, such as the flying lemur and the very poisonous pit viper (both of which were sleeping).

Then, on a 2.5-hour hike out to a beach with the island’s iconic sea stack, we saw all types of trees, ferns, fungi and orchids, and many of two different species of pitcher plants, ranging from tiny to some that were about eight inches tall. And that isn’t to mention smaller critters such fiddler crabs and long parades of ants that ere obviously on a mission of huge importance to the queen. And speaking of ants, we saw ant nests dug into the ground and others built in trees.

Overall, we saw everything we had wanted with the exception of three species that are seldom seen: the white-leaf monkey, slow loris and eight-inch tall mouse deer. So we made up for this lack by cheating–taking pictures of pictures. 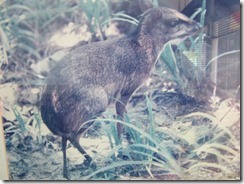 In sum, a very productive trip that was well worth putting up with a night in the very rustic accommodations (read: very, very rustic with a scratchy sheet, stained blanket, no soap and no towel, but we did have a toilet and shower) and three of the worse meals we had on the entire trip. But hey, we didn’t go to Bako for the food or the accommodations.