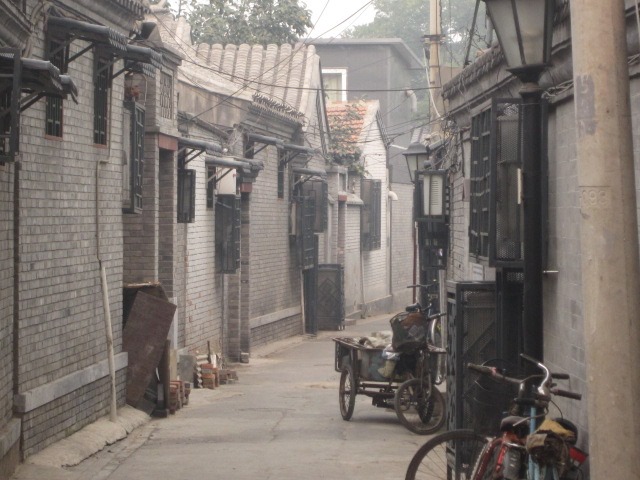 No trip to Beijing is complete without touring through hutongs, ancient Mongolian-style neighborhood built around a grid-based system of alleys. While they still existed in Beijing, many have been replaced by new housing. Some people prefer to move into the newer housing, but there are pockets of resistance against the government trying to force them out of their coveted neighborhoods. Many of the existing hutongs have been moved further away from the city center and are somewhat more hidden from the city’s main sites than our last trip. But they are an interesting way to understand how people used to live in Beijing—and how many still do.

Hutongs originally contained mud-based dwellings of all sizes from mansions with large courtyards, to single-room units. They have undergone many transformations over hundreds of years. Most, for example, have been rebuilt from mud to  concrete and bricks, heating is provided by electricity (all provided by buried cables) and most now have running water for sinks (albeit not for toilets nor showers). Each hutong has its own communal toilets that the government cleans several times a day, although not all have showers, forcing residents to go to other locations which may be further away. One of the biggest changes occurred under Mao,who subdivided the larger single family dwelling (courtyards) into small (typically 10-15 square meter) units organized around common courtyards, often with a single room per family, with tiny, separate kitchens. You know how many families live in a particular courtyard by counting the electric meters. 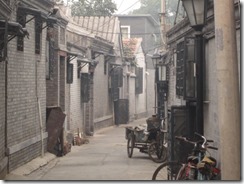 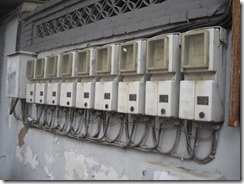 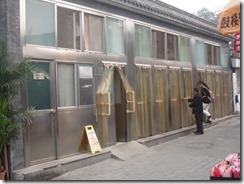 Small, however, does not translate into cheap. These units may well cost the equivalent of more than $100,000–not including the land,which is all owned by the state. (Similar sized units in mid-rise buildings in city centers, meanwhile, can cost the equivalent of well over $1 million. And this is in a country with a low per capita GDP. But since this is the new Beijing, some people are not only buying one unit, but are buying two or more, combining them into larger residences or are holding them for investment.

Although all hutongs have their own small retail stores and family-owned repair and workshops (often in the same or minimally separated room from family living quarters) some of the larger ones have formal shopping districts with a wide range of stores–including some that cater to frequent tourists. Nanlougu Xeng Street in the Hougulouyuan Hutong is one such street that the Chinese people go to for shopping. Since we were there during National Week, the street was decked out with decorations. 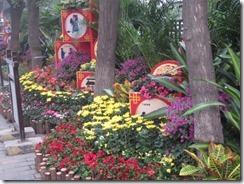 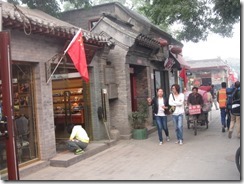 The residences were pocked with small shops, some with tiny retail stores and restaurants, some bicycle or car repair shops, some with small manufacturing establishments, where, in each case,the homes were in the same, or possibly a second room behind the business. Some neighborhoods’ even had their own tiny amusement park, in which parents bought their children rides on small cars, planes and horses by putting a coin into as slot.

We had arranged a tour that included dinner in a one-room home owned by a woman whose parents used to be part of the extended royal family. When Mao came to power, her living quarters were reduced to one main room, where she raised her family, plus a small little separate room barely large enough for a faucet, cooking area and sink. She served us a basic multi-course meal and, as part of the tour, showed us how she made dumplings. While the dinner and dumpling making portion of the tour were a disappointment, seeing how she now lived was very interesting. We were surprised that she didn’t show any animosity (at least to us) about having her living quarters so reduced in size. But who knows her true feelings.