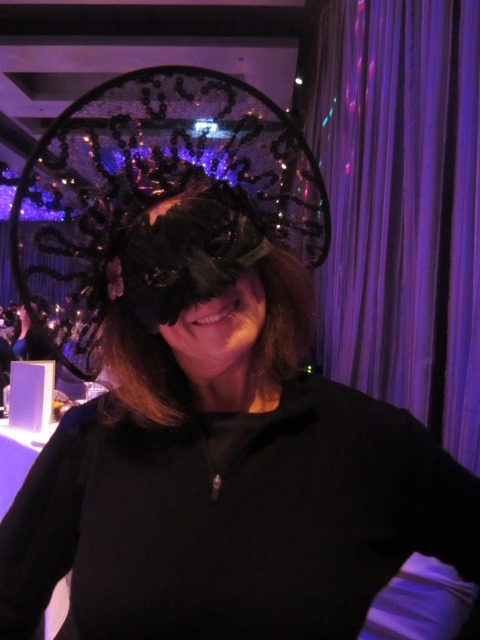 Seeing in the New Year

One thing about traveling for 4 months is that time has little meaning. OK, so it is January 3 and New Years’ was 3 days ago…at least in Asia, only 2 days ago in the US. We spent New Year’s Eve in Hong Kong primarily because we always heard about the wonderful fireworks displays. So we thought, why not? There was only one problem. The “real” fireworks display is for Chinese New Year’s, not Dec 31. Oh well. Still, we decided to make the best of it.

The abbreviated fireworks display takes place on the waterfront promenade. Sure, you can go outside and view the 8 minute display (yep, 8 minutes we discovered). Or, if you think there is going to be more going on, do what we did and rent a very expensive hotel room and sign up for an expensive New Year Eve dinner party at our hotel. Yes, we did. This is the first time we ever signed up for a New Year’s eve party. While it wasn’t inexpensive, it was almost reasonable by US standards. Our party was at our hotel, the Icon Hotel, where we were spending the night.

The party began at 7:30. Drinks were free-flowing all night long (a major selling point). We were given multiple hats, multiple masks, multiple horns..all of which we had to try on and take pictures 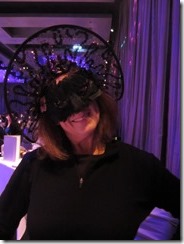 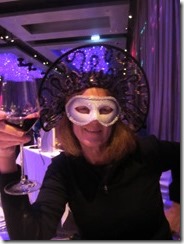 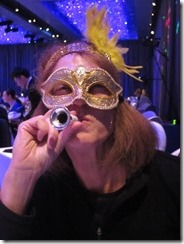 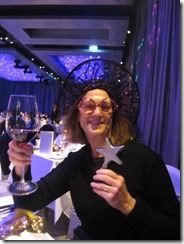 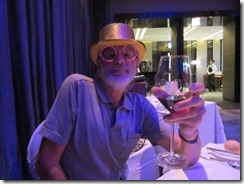 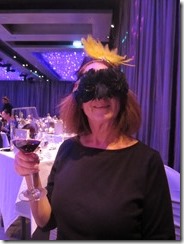 The entertainment consisted of a band that played standard music that was intended to offend no one. The woman was a decent singer, but the guy on the saxophone should have his tongue cut out—especially when he tried to sing a song by Louis Armstrong. Another guy was kind of OK. Then we had some ballroom dancers which were somewhat entertaining. But the best part was the DJ who provided a mix of songs. But we didn’t go there for the floor show, but more of the general atmosphere. 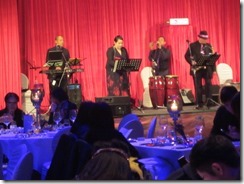 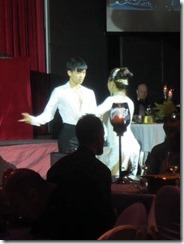 The waygu beef was the standout; perfectly prepared (medium rare), juicy and delicious. The Baked Alaska was the weakest and consisted of Neapolitan ice cream on cake, covered with meringue and briefly flamed. The prawn, meanwhile, was the largest we have ever been served and was quite good, except for the minimally concentrated lobster sauce.

While the other dishes were generally good, the egg, scallop, and chicken broth were the best among them. Still, our experience with New Year’s Eve and food was that we could always do better at home. Our traditional meal is lobster thermidor and champagne…plenty of both. But that would be a little hard to do while traveling.

After an evening of all-too-much eating and drinking, it was time to retire to the hotel’s open-air pool deck to view, from what we had read on many web sites, were supposed to be a great fireworks display (https://newyearseveblog.com/new-years-eve-fireworks-hong-kong/, https://www.discoverhongkong.com/eng/see-do/events-festivals/highlight-events/countdown.jsp?page=1). We got less than we bargained for: the 8-minute show combined lasers with a few minutes of decent fireworks over the island’s skyline. 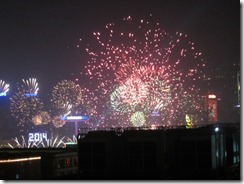 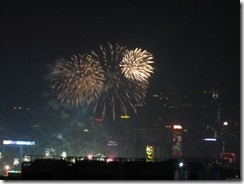 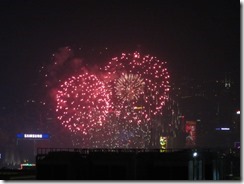 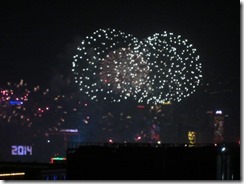 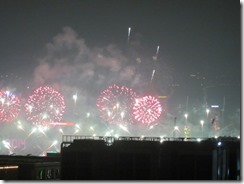 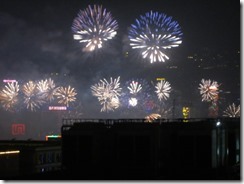 Then, while the party continued, we went straight to bed. Due to some very, very shortsighted scheduling, we had to leave for the airport at 7:30 AM the next morning for our next flight. Just as bad as our fireworks planning, scheduling such an early departure meant that we would have to miss the city’s New Year’s Day celebrations with a day filled with a big Dragon and Lion Dance Parade. We will have to plan better the next time…perhaps in Sydney.