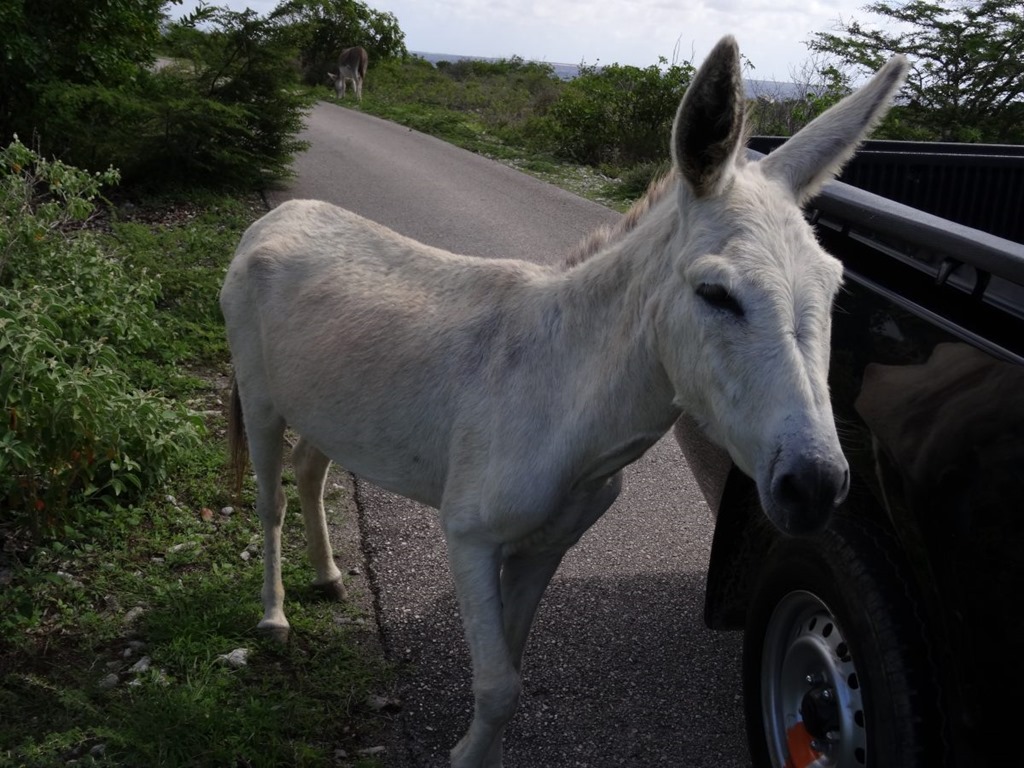 We first visited the tiny island of Bonaire more than 15 years ago and found some of the best diving that we had done in the world. It became a place that we wanted to revisit, so we booked 5 days to re-explore the island and the seas.

Bonaire was discovered by Amerigo Vespucci in 1499 and operated for the vast majority of its existence as a slave colony–initially by Spanish, and then by Holland. The Spanish enslaved the natives and sent them to Dominican Republic to work in the copper mines. Then, after the Dutch seized Bonaire and saw the potential in salt, they  brought more slaves in from Africa, and settled them in the current town of Rincon for work on its plantations, to harvest Brazilwood, tend imported sheep, goats and donkeys and toil in the salt pans on the south side of their own island. It remained a slave colony until 1863, when Holland became the last country in the world to abolish slavery.

After arriving, settling into our hotel and having a quick lunch, we spent our first afternoon driving north up the Western shore, from the main town and island capital of Kralendijk, to the border of the Washington-Slagbaai National Park (we reserved a visit to the park to another day when we had more time), and on to the town of Rincon and back to Kralendijk via the east side of the island. Among the highlights were: 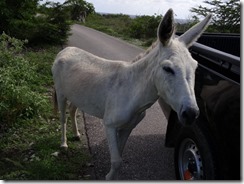 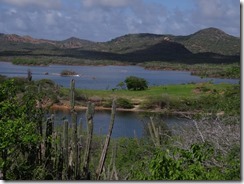 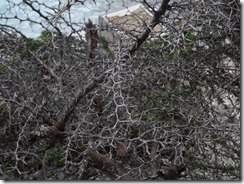 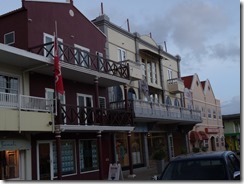 Washington-Slagbaai National Park. This former plantation occupies approximately a quarter of the entire island. As you enter the park, your come first to a museum that portrays the geology, the flora and fauna, and the 70-year history of the plantation along with exhibits explaining and showing the operation of its commercial endeavors such as its making of charcoal, lime, aloe, and salt and the process by which it herded goats from the rugged land. It also provided an interesting profile of the flamingos that frequent the park, explaining, for example, how they are the only filter feeding species of bird, how their diet evolves from vegetarian to carnivorous (especially snails and small mollusks) over their lives and their monogamous relationships.

We then took the long route drive around the park, walking the rough, eroded coral bluffs of Boka Chikuta and overlooking the two-stage tidal falls of Boka Kokolishi. We passed more goats, flamingos and especially iguana (who had a particular affinity for the water gathered in the tire ruts after a quick rainstorm) than we could count, as well as the rugged coral cliffs of Seru Grandi. We walked to the crab-patrolled Pos Mangel pond and passed many of the beaches along the north shore. We then reached our primary destination–the small beach at Wayaka II, which is the entry point to what many claim to be one of the best snorkeling and dive sites on the island. We were not disappointed.

Just as Washington-Slagbaai National Park occupies a vast portion of the northern part of the island, the Solar Salt Works occupies the majority of the south. These salt pans, in operation from the early 16th century, is now run by Cargill Corporation heavy equipment, rather than by slaves yielding pick axes and wheelbarrows. The operation, however, is still largely the same–walling off shallow sections of salt water, waiting for the sun to evaporate the water and removing the salt (and creating new land in the process). 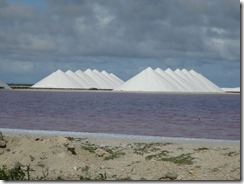 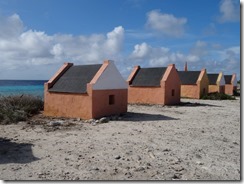 And, as a reminder of the island’s early heritage, it has reconstructed and maintains some of the one-room shacks in which slaves lived for the workweek, as it took them nine hour (each way) to walk to their homes in Rincon.

The south of the island, however, has more than salt ponds. It also has a number of beaches, including the island’s premier kite surfing beach. And further up the east coast is another means by which the island is creating more land; this one with no assistance from man. Lac Bay is home of the island’s largest concentration of red mangroves–the only tree that can thrive in salt water. The tree’s massive above-ground root structures not only provides a means for the tree to breathe and take in nutrients, it also traps silt and organic material which attracts fish and provides a foundation on which new land and plants–especially more grasses, cactus and manzanitas trees–can grow.