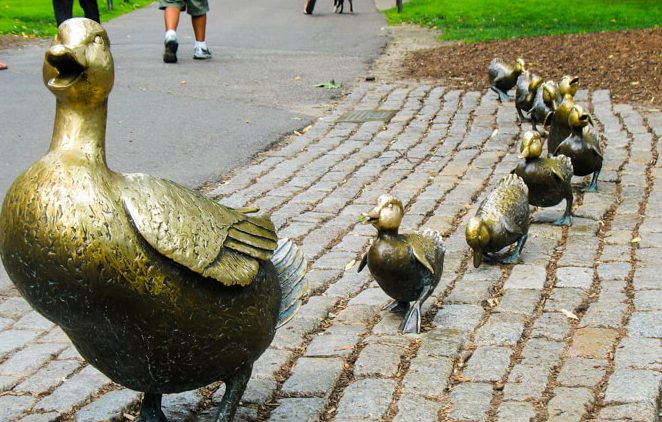 We recently returned to Boston, where we had lived for over 20 years before moving to San Francisco. It was an opportunity to spend time with friends, revisit some old haunts and explore new places and restaurants.

Boston Back Bay and South End

We spent most of our time in the city reacquainting ourselves with our old neighborhood (Back Bay) and several of the other areas that we routinely visited, such as the South End. While some of the names—of stores, restaurants and so forth—have changed since our last trip, both areas are generally the same pleasant, Victorian-style, mixed residential/commercial communities that we knew and loved: even through some homes were disguised in their pre-Halloween garb. And of course, we had to stop at Joyce’s favorite statue in the Public Gardens (Make Way for the Ducklings).

The greatest change was around the large Prudential retail and commercial district, which effectively divides the Back Bay and South End neighborhoods. The mall now includes a huge Eataly store (Mario Batali’s name and products are no longer part of the chain).  This culinary superstore bring thousands of Italian foods, wines, multiple mini- and full-service restaurants (as for pasta, pizza, seafood, charcuterie, and so forth) and the largest selection of fresh seafood together into one huge, beautiful culinary superstore. And then there is that 61-story tower that has just sprouted off the South End-side of the complex—a , 742-foot complex that will house a Four Seasons Hotel and ultra-upscale condos. At a height of a mere seven feet less than the original Prudential Tower, it is now the city’s third-tallest building behind the Pru and the 790-foot 200 Clarendon Street, glass-enclosed  John Hancock Tower (now called 200 Clarendon).

Then to downtown Boston and the Financial District. While this area is already pretty fully developed, a few high-rise office and condo buildings have been recently built and new ones are coming. Ground has recently been broken on what will be the city’s fourth tallest structure, the 690-foot commercial and residential Winthrop Square tower.

Meanwhile, the Greenway is a park that covers the land that was once blotted by an above-ground highway that, courtesy of “The Big Dig”, turned the highway into an underground tunnel. When we lived in the city, the massive construction project had just begun, snarling traffic and keeping pedestrians away from that section of the city. The last time we were in town, the park had taken shape, but was relatively empty, It is now site of the Greenway Public Art project which, in addition to the Holocaust Memorial (which has been in the park since the beginning), it now has others including Harbor Fog (which periodically blows mist) and Glow, which places old, traditionally iconic neon signs from Boston suburbs into a central place.

We also felt an urge to revisit historic Faneuil Hall, the so called “Cradle of Liberty”, arriving just in time for a brief presentation of the building’s history. Originally built as a marketplace and meeting hall, it was the site at which the town’s qualified voters (white, protestant males over 21 and with sufficient assets—who accounted for only about 10 percent of the total population) voted on issues affecting the town. These included levying their own taxes and eventually, protesting taxes that Britain levied. The Great Hall was expanded to accommodate population growth and the elimination of property and religion requirements for male participation. By the time Boston was large enough to become a city, and gain its own city hall and legislative chambers, the Hall became a public debate hall, discussing issues including slavery, women’s suffrage and labor rights. It is now used for some civic and naturalization ceremonies.

Boston’s downtown does quite a good job integrating its history with role as a modern business venue. The seaport area has much less history to preserve. Its two most historic structures are the:

Joyce worked for several years in this area when she was working for a seafood company. While the Fish Pier and World Trade Center still looked the same, the entire seaport area had undergone a total transformation. When Joyce worked in the area in the early 1980, the primary value-add of this section of town was probably as a low-price parking lot for downtown and two large tourist-magnet fish restaurants (Anthony’s and Jimmy’s). Perhaps it was not all that surprising since the harbor was something of a cesspool, earning the distinction as the “dirtiest harbor in America.” The opening of the massive, advanced, Deer Island Waste Water Treatment Plant in 1995 has made Boston Harbor among the cleanest of the major city harbors and a popular aquatic playground.

The transformation of the Seaport has been at least as dramatic as the Harbor water. High-rises are popping up like weeds and vacant land has virtually disappeared. It is now home to the city’s largest conference center, Boston’s interestingly designed cantilevered Institute of Contemporary Art , several major hotels, many corporate offices and soon, the world headquarters of GE. It has also become one of the city’s premier neighborhoods, with tens of thousands of new units and hot new bars and restaurant . The transformation has been phenomenal, rivaled only by the other hyper-growth neighborhood around Fenway Park, which we visited last trip, but not this time.

This trip’s only real Seaport stops were at a restaurant, Row 34 (see our Boston restaurant post) and the Institute of Contemporary Art (ICA) where we particularly enjoyed three exhibits: