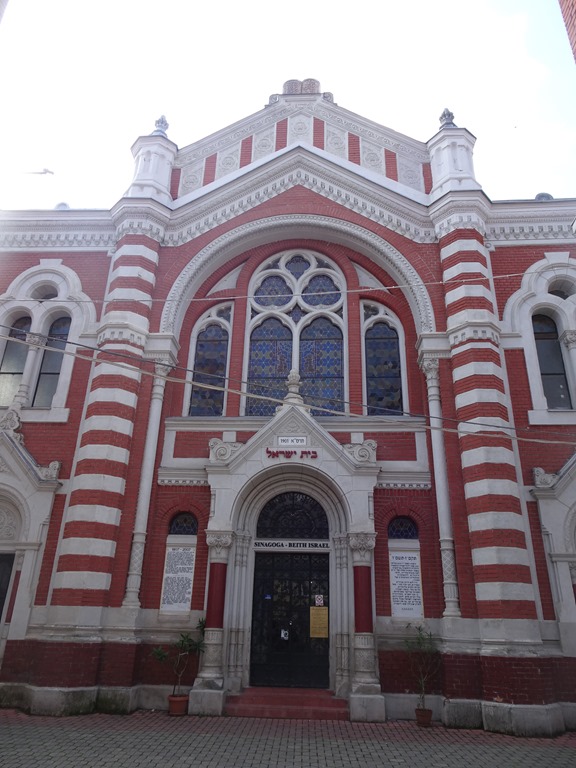 Brasov Romania was initially founded by German settlers and rapidly grew into an important regional commercial center. Its riches, however, made it as target of frequent attacks. in the early 13th century, Teutonic knights fortified it and turned into a citadel city. This helped change the nature of the city.and its buildings. While the German merchants typically built understated, functional homes, the Knights built more ornate dwellings, many of which have been renovated and maintained by the city or businesses.

The lovely (if somewhat rundown) heavily touristic town combines 19th-century Baroque style commercial buildings, a Byzantine-style Orthodox church, an Art Nouveaux city hall, library and synagogue, a Modernist-Romanesque House of the Army Building, a 15th-century town hall and a huge, 14th-century Gothic-style church (the so-called Black Church), all of which seem to work together. 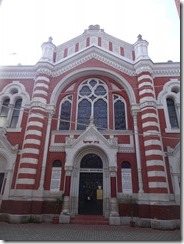 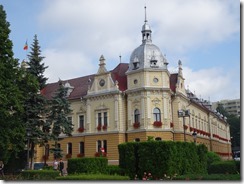 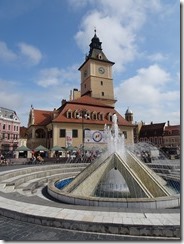 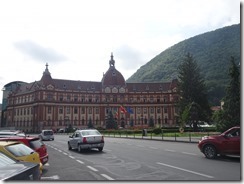 The city also maintains a number of remnants of its Middle Age, fortified past. These include several of the old city gates, the U-shaped Blacksmith Bastions, the 20th-century replacement of the so-called Black Tower (a reconstructed version of one of the city’s four observation towers), and a segment of the western walls.

Among the most interesting of the city’s historic buildings are its:

The old town also has a number of somewhat less historic, but very pretty sections, especially in its pedestrian area. Republicii and Michael Weiss Streets, in particular, have some lovely stretches of shuttered, pastel-painted buildings of many different architectural styles. 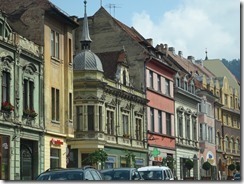 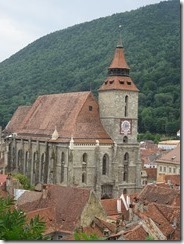 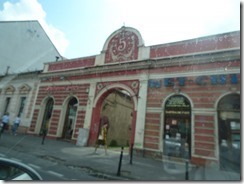 Sergiania is a popular Romanian-style restaurant that is located in a lovely brick basement whose rooms are divided by a series of arches barrel-vault ceilings. We had two dishes: Joyce, with her now-standard stuffed cabbage rolls (with polenta and bacon) and Tom with wild boar medallions with mushroom sauce and scalloped potatoes, Neither of us were particularly enthused: Joyce because of the sour taste of her rolls, Tom due to the well-done meat and the whole peppercorns liberally sprinkled in the sauce. This said, we both surprisingly enjoyed the complementary fried lard amuse bouche (which you sprinkle with salt and east with bread). And, after our previous day’s discovery of the Romanian Feteasca  Neagra grape, we tried another similar wine, this a 2016 from Cau de la Letea’s Sarcia Niculitel Vineyards; which went well with our dishes and which we also enjoyed.

Villa Katharina is a small boutique hotel in a restored building. Our room was huge with very high ceilings and nicely decorated in period pieces. Loved the old squeaky wood floors. It had a huge tub as well as a separate shower. Air conditioning was not great but this seems to be normal in Romania. We did not eat breakfast but it is available. The wifi was not working in the room. We could get it somewhat in the common areas but it was going up and down. They unsuccessfully tried to fix it for us. They have parking right in front of the property. Great place to stay in spite of the wifi issue.