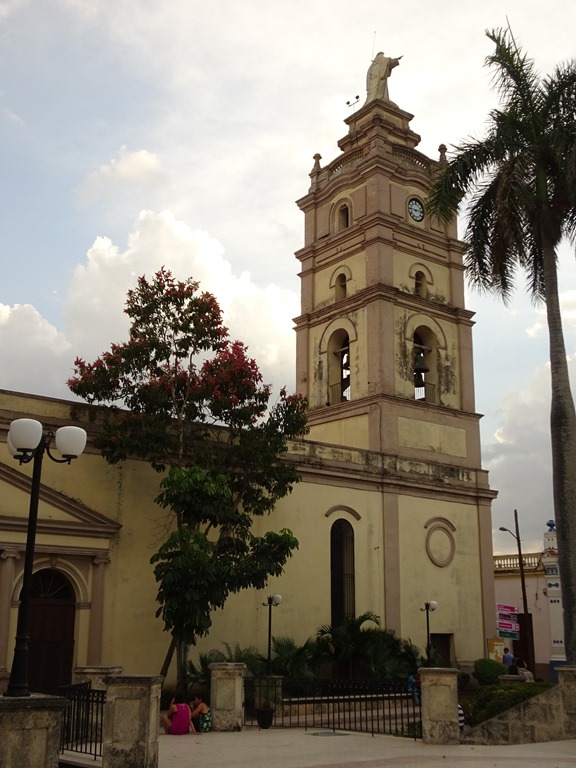 Camaguey Cuba is the capital of one of the country’s largest provinces. Like Havana, it is a UNESCO World Heritage Site. The residents moved the city’s location from its original location by the coast to escape pirates and restive Indians who continually and fiercely resisted Spanish control. Unlike most Cuban cities, Camaguey is not laid out in an orderly fashion like other Cuban cities. Its central area has a confusing and irregular network of short, winding, alleys and dead ends that were intended to confuse raiders. But like a number of other Cuban cities, it has more than its fair share of nicely restored Neo-Classical buildings.

The main square is named Ignacio Agramonte Park in honor of a local Cuban pre-independence hero (one of the country’s regional revolutionaries who led a 1868 rebellion that failed) This fight was a prelude to the successful 1895 revolution in which Jose Marti successfully unified the entire country in the successful revolution. A statue of the hero, with the stylized female symbol of the country’s liberty, is at the center of a park surrounded by royal palms in honor of loyalists who the Spanish governor had executed in the square. The square is also surrounded by some lovely 18th through early 20th-century buildings including the circa 1735 cathedral, the  Trova Patricio Ballagas mansion (now a cultural museum) and the library. Just off the square are a number of other neo-colonial buildings including the Municipal Assembly, the Palace of Justice and the Municipal Theater. 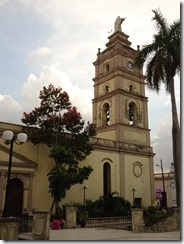 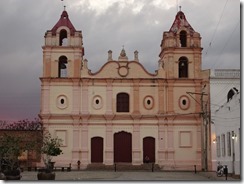 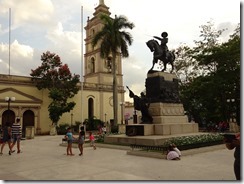 A few blocks away is the pretty Merced Church surrounded by nicely restored buildings that serves as a Convention Center and Agramonte’s home, which has also been transformed into a history museum. 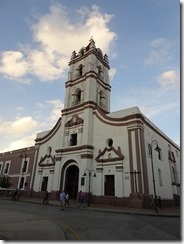 Not all lovely churches are concentrated in the city center. Some are scattered throughout the city. The Soledad Church, for example, lies at the end of the city’s primary shopping district, the Independence Avenue pedestrian mall. The Carmen Church, which lies even further out of the city center, lies at the center of a courtyard that is lined with a number of fun bronze statues and an abstract mural. 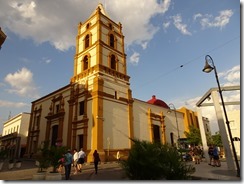 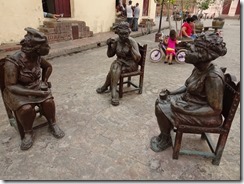 While church facades and bell towers, and a few other buildings, such as the Gran Hotel, “pierce the city’s skyline”, most buildings, including the nicely restored Neo-Classical structures, are only two or three stories tall. But while these buildings are relatively ornate, the vast majority of the city’s older (more than about 100 years) residences and commercial buildings are, except for the protective grills, are quite unadorned. An interesting city to walk around, but we found that a few hours (exclusive of museum visits) to be about right for us.

And it was a good thing, since that was about all the daylight time we had between arriving from Trinidad and retiring for the night before an early start for the long drive to Santiago de Cuba near the Western end of the island. But we did have time to eat

El Paseo, where we had two dishes: stewed rabbit with mole; and shrimp sautéed with garlic and onions. Both were good as was the rice and black beans that we both had with our entrées. We chose a less than exciting Spanish Crianza (Clos de Torritoas, 2008) from the limited wine list.

We stayed at the Islazul Gran Hotel . The hotel’s entrance is in the middle of a pedestrian street . Fortunately we were able to wheel our luggage from the car, down the mall and into the hotel. this is an older period-style hotel. The rooms are dark and like all Cuban hotels, the lights are dim. Location is good and it was clean but that is all it has going for it. the air conditioning was noisy and the staff did their job and no more.

the breakfast, however, was better than most places and offered a larger variety of foods. this is a 2-3 star hotel at best.