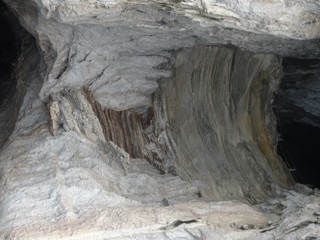 We were last in Capri Italy in 2007. As it was a long time ago, we were due to go back.  We took an early morning hydrofoil from Naples and took the funicular to Capri Town, walked to and checked into our hotel so that we could explore the areas unencumbered with luggage.  We took the funicular back to the port for a two-hour round the island boat tour, during which we were awed by the 1,000+-foot limestone cliffs that plunged into the sea and the arches, sea stacks and grottos (White Grotto, Green Grotto and Blue Grotto) that the relentless waves created. 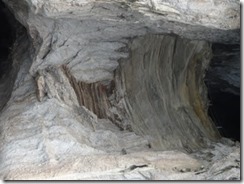 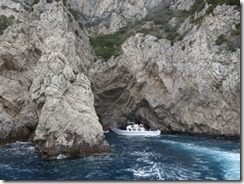 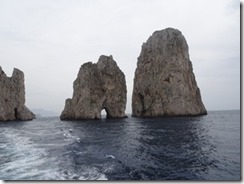 Although the tour was supposed to include a stop at and a optional rowboat ride through the fabulous Blue Grotto, by the time we arrived, it would have taken an hour wait to even land at the famous site, and another hour to board the rowboat. Since we have been through the incredible, sapphire blue grotto 11 years ago, we passed in favor of spending more time on the island. Here is what we missed (from our 2007 pictures). 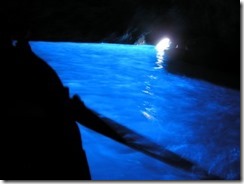 When the boat returned, we stopped for a quick lunch (see below) at the port and caught a bus that took us over the rocky mountains, past amazing views of the cliffs and the sea, to Anacapri, the island’s second largest town. 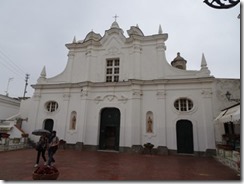 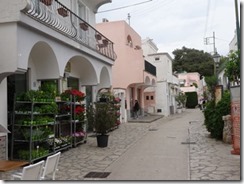 We explored the lovely town of whitewashed buildings and returned to Capri Town.

Capri town’s main square is surrounded by casual cafes, viewpoints and pretty alleyways that shoot off in all directions. Most of this high-rent section is filled with restaurants, gelaterias and lovely, fashionable and expensive shops, all of which seemed to be selling Lemoncello along with Capri-fashion cloths and jewelry. And this does not count perfume and fragrance stores and one quite interesting perfume factory. The only thing surprisingly missing seemed to art galleries, of which we saw precious few.

We took a 1.5 hour hike along the Pizzolungo trail; an incredible paved and brick-stepped trail that climbs up and plummets up and down mountainsides, perhaps 600 total steps plus more gradual inclines and declines. We were rewarded with very different, but still amazing views of the sea arch and sea stacks that we saw from the sea, plus a bonus stop at the Gardens of Augustus. 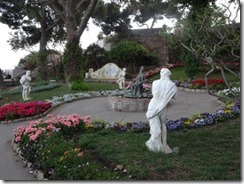 The modest gardens were lovely in and of themselves. The highlight, however, were the incredible views from the belvederes; down the rocky cliffs to the sea, inland across the whitewashed city, across a bay to 1,000-foot cliffs and down to a paved trail with switchbacks that were so tight as to look like a tightly woven fabric. 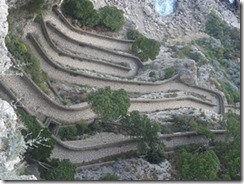 We returned to Capri Town through the highest-rent section of an already ultra-high rent town, past lovely shops. to even more views and eventually to our hotel for much welcomed showers before dinner at Aurora, one of the town’s premier restaurants.

We had only two restaurant meals on the island, one casual lunch at the cove and a less (but still relatively) casual dinner in Capri Town.

Restaurant Augusto, a fresh seafood restaurant at the port, where we had two less than healthy, but still tasty, fried dishes: calamari and seafood frito misto with calamari, prawns and anchovies, along with a half-bottle of 2016 Terra de Neda Greco de Tufa white wine from Compagna.

Aurora, an upscale, yet casual restaurant at which we began with an amuse bouche of fried, ricotta-stuffed zucchini flower with cherry tomatoes and parsley puree. We then shared one appetizer (grilled octopus with potato and raw artichoke) and on entrée (panko-crusted grilled seabass with braised escarole). For our wine, we chose another, more interesting, 2016 Greco de Tufa, this one from Pietacupa winery. Although we ended up enjoying the meal, this was only after we both returned our dishes for being overcooked, and despite the disappointing service. Perhaps it was because the season in Capri was just beginning.

We stayed at the Villa Helios Capri.The hotel was very expensive for what it is but we guess they need to get the money when they can. The room was sparsely furnished The “view” from our room showed 2” of the water and mostly trees. We could have used a plug by both sides of the bed (only on one side). For this price we would have expected robes in the bathroom. Hint: Call the hotel directly and ask for a discount. We booked online but while we were checking in, and overheard a phone call where the person was given a much lower rate for the upcoming weekend. If we come back, we’ll try another place.