Chania Crete is a 16th/17th -century town in Greece. It was born as a Minoan settlement but now consists of a mix of 17th-century Venetian and 18th/19th-century Neoclassical and Turkish buildings. Although it, like Rethymno, has few especially noteworthy structures, it has a few lovely neighborhoods that are worth just wandering. The most interesting are around the harbor.

What to See in Chania

Harborside, is a lovely area which was currently dominated by Fort Firkas (a Venetian fort now used as a Naval Museum). It is surrounded by an endless string of restaurants and cafes with extraordinarily aggressive shills that will resort to anything short of bodily force to bring people into their restaurants. We purposely chose places that advertised and practiced no-pressure approaches. The harbor, with its dramatically posited lighthouse, is also home to the mid-17th Mosque of the Janissaries (the city’s oldest Ottoman building), and somewhat away from the main area, a line of Venetian arsenals, which were effectively dry-docks for ships not then in use. 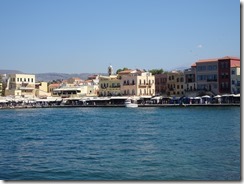 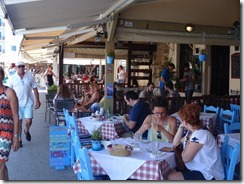 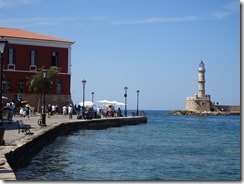 Old Town is a  lovely, albeit extremely touristy area of mostly refurbished (although there are a number of exceptions) 17th-century buildings. While very pretty, the area verged on being overrun by tourist shops, cafes and restaurants. (This, of course, did not stop us from walking through, admiring and eating at the restaurant of a refurbished building that is now a five-star hotel). The area is also home to the city’s primary cathedral and its Archaeology Museum. 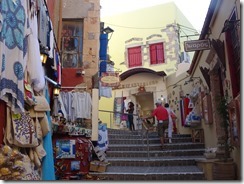 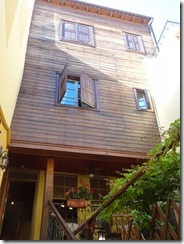 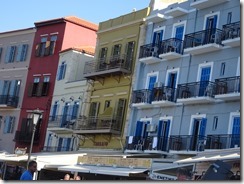 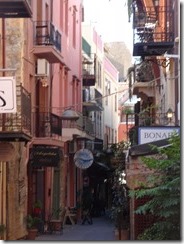 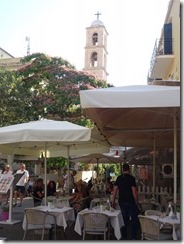 KIastelli Quarter is the oldest section of the city. It is characterized by its Venetian-style architecture and design elements. It also has a viewable archeological site featuring the remains of an ancient Minoan settlement. 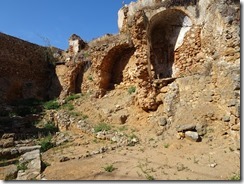 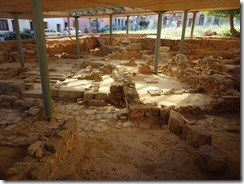 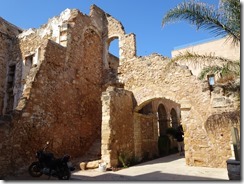 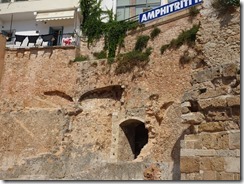 Splantzia Quarter is a pretty, cobblestone-paved neighborhood of 17th-century homes set around a pretty plaza and a couple of 16th-century Catholic churches. 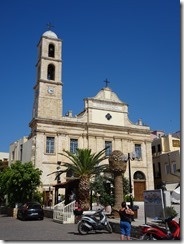 Topanas is a lovely, increasingly commercial neighborhood set atop a hill behind Fort Firkas. 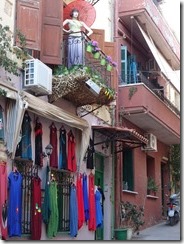 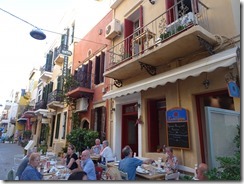 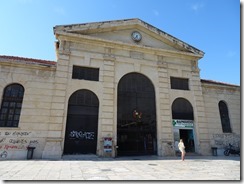 The Jewish Quarter, or at least what used to be the Jewish Quarter before Hitler sent its residents to concentration camps is another area to visit. It as one of the few remaining relics is 15th-century synagogue, of which we could see only the outer gate. 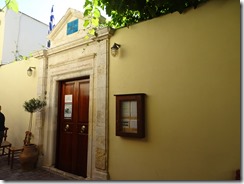 Amphora  was one of the few no-pressure harborside restaurants at which Joyce had steamed mussels and Tom had a very good, while Red Snapper served with rice and an unexpected side dish of black-eyed peas with onions. With lunch, we had a less than exciting half-bottle of Lyrarakis Vilana, an indigenous grape that produces a very light, lemony wine with a significant acidity.

Serenissima is the restaurant of an Old Town building the has been totally renovated into a five-star hotel and a French-trained chef who had worked at many Michelin-starred restaurants. We tried three particularly interesting-sounding dishes. We began with savory “cheesecake” with poached egg, cured pork, mushrooms, powdered porcini and lemon marmalade. Delicious. Our main courses consisted of chicken with chanterelles, parsley cream, wild garlic and game sauce; along with shrimp and mussels with beluga lentils, maple syrup and smoked bacon. All the dishes were interesting and far more innovative that we would have found at any of the city’s other restaurants. Although we particularly enjoyed the amuse bouche (mussel soup) and the appetizer, we felt that the main dishes lacked something. The service, meanwhile, was schizophrenic. We were initially very pleased, especially by the sommelier who walked us through alternatives and ended up suggesting a lovely local wine (a 2016 Idaia Liatiko with light red fruit, a slightly floral tone, a bit of leather and a fair amount of acid) that went very well with two main dishes. But from the moment we received our entrees, the servers disappeared. Even when they spent considerable time with the tables around us, we were not even able to get their attention when we tried. The surrounding tables, which got their entrees after us, both got desserts before we could even get our plates cleared. Totally inexcusable for a restaurant with the aspirations that this restaurant appears to have. 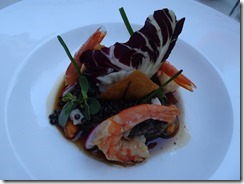 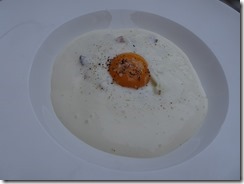 Samaria Hotel Chania was a short 10 minute walk outside of old town. We had to pay for parking. It seemed pricey for what it was. Comfortable, nice pillows and linens, but still seemed expensive.