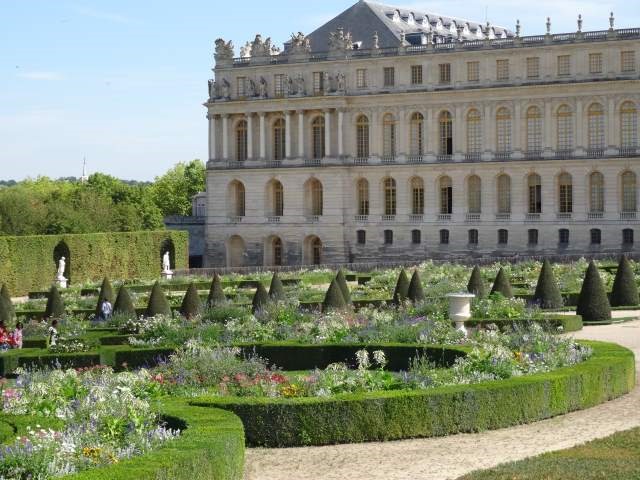 As we continued on our Full Day Versailles VIP “Behind Locked Doors” Tour offered by City Wonders (who provided us with complementary access to this tour. As always, however, our descriptions and assessments are totally objective.) we left the main Versailles Palace with our great guide Herve, to see what was going on outside.

Much of the afternoon was devoted to the many acres of gardens and the more casual buildings that dotted it. Louis XIV loved the gardens. He even, wrote a book on the gardens and how they could be best enjoyed, and sponsored extensive botanic research on plants. He was also the first to employ topiaries and upset some garden designers by hiring architects to create some of these gardens, such as one with a fountain surrounded by a colonnade. 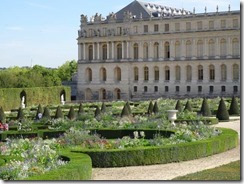 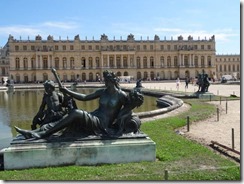 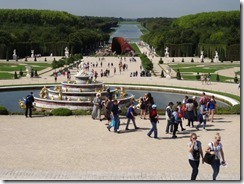 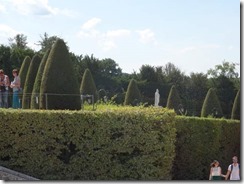 The garden closest to the castle are of the classic French formal style radiating out along a long canal. He also employed the concept of secret gardens, where people walked among long rows of trees and, when they reached a turn, were confronted with something unexpected, such as fountains (including four designed to evoke each of the seasons) studded with gold-plated sculptures spouting water. One such secret “garden” was not a garden at all. It was an amphitheater with built-in waterfalls, and studded with gold-leafed, sculpted urns that held fires that illuminated a marble dance floor at its center. This was the site of some of the palaces more elegant balls. He also had music playing and fountains flowing. As there was insufficient water in his days to keep all of the fountains flowing at one time, the “staff” would turn fountains on and off as he approached them so that he always saw the beauty. Today, the water in one of the main fountains is beautifully choreographed to music. 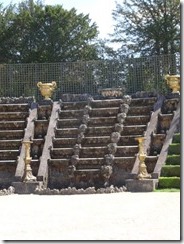 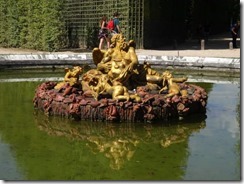 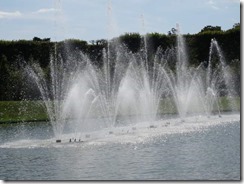 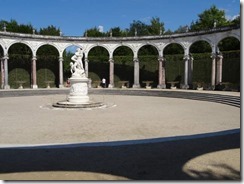 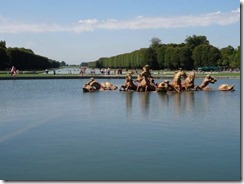 Back in Louis’ days, the garden also housed a menagerie with rare animals and a labyrinth filled with sculptures of mythical creatures.

The gardens also had some contempory art in it. Each year an artist is chosen to install some art in the garden. When we were there, British artist Anish Kapoor had several pieces being exhibited. One you would know right away if you ever saw The Bean (or more officially, Cloud Gate) in Millennium Park in Chicago. Here, however, it created more of a glare of the sun as you approached it than being as intriguing as in the much larger piece in Chicago. Still, once you got closer to it, you could maneuver away from being blinded by the sun and get a sense of the same type of reflections of his larger piece. His other installation, at the top of the canal area in the garden was somewhat more intrusive. We agree with our guide Herve that it was more disruptive to the garden than it should have been. The good news is that once his time is up, another artist will put new works in place instead. 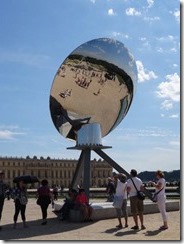 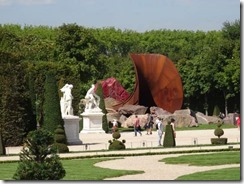 The Trianons and Marie’s World

Toward the back of the gardens, which the king and queen reached by boat, was a smaller mansion named the Grand Trianon (named after the village that Louis XIV bought and destroyed to build a less formal place Louis XIV had had erected in 1670 to escape the pomp and formality of court life with his mistress Madame de Montespan.  Louis XVI, who had no mistresses, used it with his wife (Marie Antoinette ) and, also unlike the case with his predecessors, with their children. Even the gardens were less formal, with somewhat more free-flowing gardens and fountains with playful, rather than grand historical and mythological sculptures. 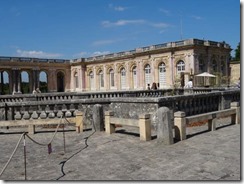 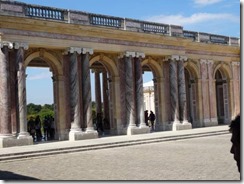 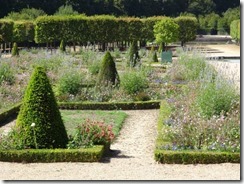 Further back still in the garden was a world created by and in which Marie Antoinette spent as much of her time as possible. While she appreciated the beauty of the formal gardens, she preferred a much more natural looking environment—albeit one designed to her own whims. The cornerstone is the Petit Trianon, a smaller, even less formal residence that Louis XVI gave to his wife. 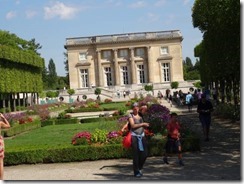 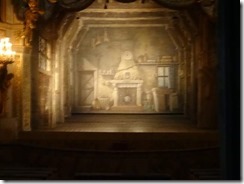 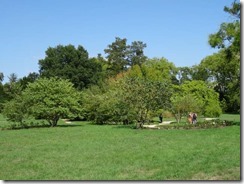 This, however, was only one small corner of the large segment of the gardens that she had her own architect and garden designer create around her own whims. This included her own theater. She loved to act (another salacious act in a world in which actors were considered to be declassee) and staged her own productions. And since none of the aristocracy would even consider acting, she pressured some of her relatives and even servants to perform with her. And the audiences? Since few aristocrats would attend, her audiences included servants. Even her choice of plays and roles were controversial. She chose one (The Marriage of Figero) that her husband had initially banned as it criticized royalty and an unequal division of resources. In another, she played a servant, singing to her own servants of the difficult lives of being a servant. It wasn’t that she had liberal (or, god forbid, even revolutionary) leanings. It was that she had no concept of political ideas—or, according to our guide, anything else that required any intellectual discipline. Not that she was stupid; just intellectually undisciplined (a far cry from the influence to which the public attributed to her.) In fact, one of the few times she tried to exert influence—to get her husband to help her mother (the Queen of Austria) extricate herself from a war that the Louis XVI had advised against), he refused. Even after she through a temper tantrum!

Also, as she grew older—and especially after she had children—she, unlike previous queens, doted on and devoted extensive time to her children. She also became less and less formal in everything from the environments in which she spent her time to the clothes she wore in these environments. She had her architect design more natural looking forests and gardens (to her wishes, of course), created an artificial mountain (supposedly representing the Alps) around an artificial lake that fronted a small (but elegant) pavilion (or Belvedere) in which she spent much time. She even had them build an artificial grotto in which she and her friends could relax (and which prompted additional rumors of infidelity, with both men and women). She also became less formal in her leisure dress. So much so that one portrait of her in such clothes had to be repainted out of fear that it would cause yet another scandal. 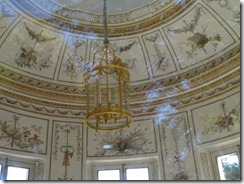 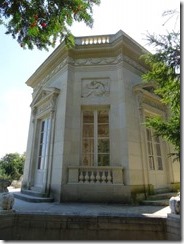 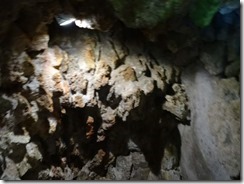 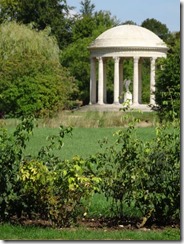 Further evidence of this informality—and the money she would spend to have it created, can be seen from our last stops of the tour. The first, a recreation of a small Norman village, with its quaint, half-timber houses. The interiors, however, were decorated in a style similar to which she was familiar in the palace. Then there was the farm, with a selection of farm animals and from which fresh food—that which Marie came to prefer—was produced. Even here, there was a concession to her past, She, for example, took her children to collect eggs from her laying hens. But only, apparently, after servants had washed the eggs. And she would hold and play with the animals. Yes, only after they have been washed. 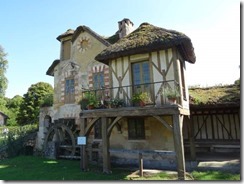 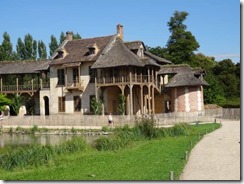 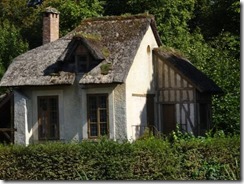 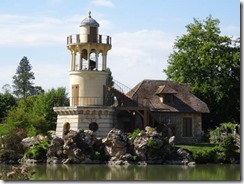 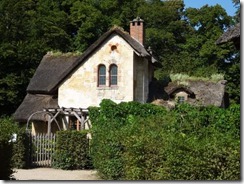 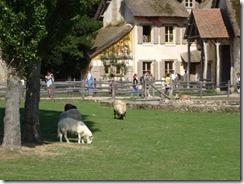 A lot to see and learn about and much more than we would have ever done on our own. Throughout it all our guide Herve was so engaging and so knowledgeable, that the information was kept us engaged at all times. While the beauty of the Palace and gardens were amazing, so too was the insight we gained into the royals. Although our last blog talked a little about Madame duBarry and Marie Antoinette, we would be remiss if we didn’t end our blog on Versailles with a little more information on the French Revolution, which ended with the beheading of Louis XVI and Marie Antoinette (and anyone else associated with them).

Marie Antoinette never really fit into French royal life. She came from a totally different environment and hated the way that her life became very public (Louis XVI also disliked his lack of privacy). And as they were married at a young age (she was 14), it took them 7 years to figure out how to make a baby (Marie’s brother was called in to teach them about the birds and bees.)

Although it was said that Marie moved very gracefully, she was not considered to be very attractive. The French people did not like her at all and felt that that she had undue influence over the king (actually, she had zero political knowledge or influence) and that her spendthrift ways had bankrupted the kingdom (actually, it was primarily the cost of financing the American Revolution that did this). She was also supposed to have many love affairs with men and women, whereas there is no proof of this happening). Once she had children, she was a very good mother who adored the children and interacted with them (other royals handed the children off to caretakers).

The monarchy’s end started when an angry mob stormed the Bastille, and a number of people walked the long trek to Versailles to demand the head of the queen who became a symbol of their misfortunes. When the mob temporarily calmed down after the queen came to the balcony surrounded by and holding her children and then showed humility to the crowd. Three of the mob’s emissaries were admitted to the palace. While the king and representatives spoke of the transition to a constitutional monarchy (to which the king was not at all opposed), the mob’s tempers inflamed over the night. They demanded that the king and his family move to Paris where they could be watched. The King asked for the night to think about it but by the next morning, the mob stormed the gates. After a bloody fight in which a number of the queen’s guard’s were unceremoniously beheaded and their heads mounted on stakes, the Royal family’s carriage was escorted to the city, where the king and queen were imprisoned and eventually beheaded. Their oldest son (the very young Dauphin, who was heir to the throne) was thrown into a solidary cell, being fed, but seeing no other human, for more than a year. After being let out (emaciated, in terrible health, and apparently with little left of a mind that had not been developed), he was entrusted the care of a shoemaker, before dying at the age of 9.

Did Marie Antoinette really say “let them eat cake”? History says no and that she was not the villain that the people thought.

Our tour made us think more about the French monarchy and the French Revolution. And having it all done while seeing both public and private areas of Versailles made this a day that we will long remember. If you plan to visit Versailles, we highly recommend taking this all-day tour. City Wonders and our guide Herve did a first-class job and really made the palace and its characters come alive for us.