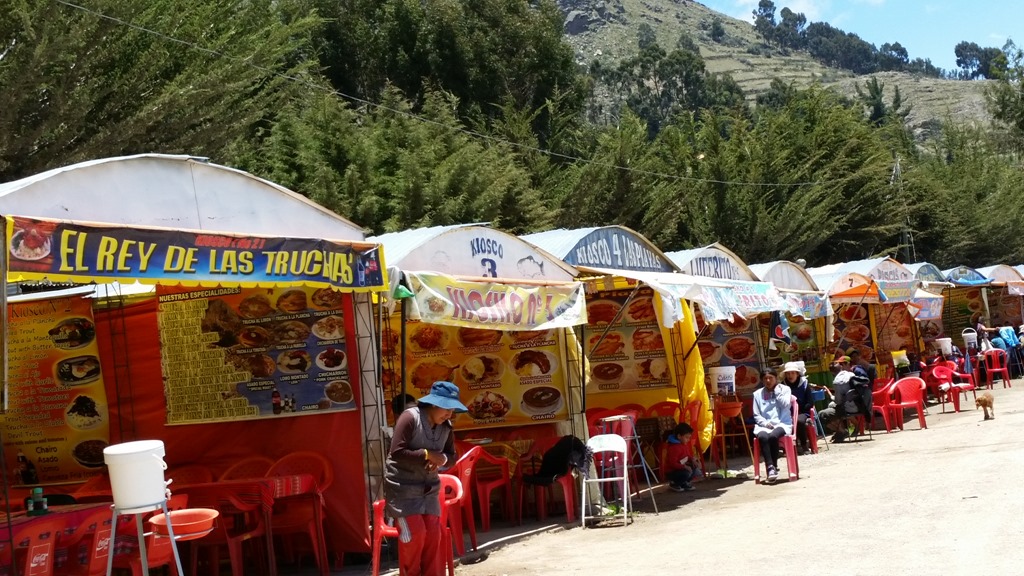 Copacabana, on Lake Titicaca, was revered by the Incas. Then, when the Spanish built a chapel to commemorate the virgin, it became a Catholic pilgrimage site that continues to draw pilgrims to the city four times a year, swelling the city’s population of 18,000 to 40,000 or more. The city’s attractive lakeside site, meanwhile, draws vacationing tourists. And that was why we were there.

The city’s life is based primarily around the nicely landscaped plaza (Plaza 2 de Febrero) the main street (Avenida 6 de Agosto) and the lakefront, which is lined with docks on one side and a long line of more than 20 casual, outdoor tented seafood kiosks on the other.

As interesting as the main streets, however, are some of the more local streets, particularly Avenida Jaregui and the streets that run between these two Avenues. These streets are filled with families frequenting food and snack stalls in the evening. The morning are even more interesting, with streets lined with stalls and blankets with women (primarily) selling selling fresh fish and produce to other women. Many are in traditional dress, with multiple layers of pretty skirts, covered with hand-knit sweaters and often topped by traditional bowler-style hats that from our perspective, appear to be three sizes too small.

The city also has two “official” sights. These are:

The Basilica becomes so crowded during pilgrimaged and festivals, that it requires overflow space. Masses, for example, are often delivered or piped out into the courtyard. While devotions of flowers (traditionally gladiolas) are placed on the church’s alter, there is a separate building in which devotional candles are purchased and lit.

Another ceremony is conducted outside the church’s courtyard. Residents who purchase cars (either new or used) line up in front of the entrance to receive the virgin’s blessing for their cars as a means of protecting them from accidents. Once the blessing are bestowed, the car is decked in flowers and sometimes, topped with a ceremonial bowler hat.

Our mission was to try each of the lake’s primary fishes, Salmon Trout, Rainbow and Kingfish. The bad news was that none of the restaurants had kingfish or rainbow trout. The good news was that we loved the salmon trout.

Then, of course, there are some of the region’s most popular snacks. These include giant popcorn from the region’s large kernel corn, and peanuts; some roasted in stone ovens and others in clay ovens. Although those roasted in clay ovens have a darker color, the tastes are supposed to be the same. We, however, preferred the stone oven variety, at least since our bag of clay oven peanuts tasted a bit stale. (Whether this is normal, we do not know.)

Kiosko Lucy. Since we had (and enjoyed) the local trout for lunch, we wanted to try the lake’s other primary fish for dinner. But while every restaurant and kiosk has trout (trucha), few have kingfish (aka, perjerry or silverside). After searching a number of restaurant and kiosks, we found only a couple that even had kingfish one the menu and only one of these that said she had it. Although the fish turned out to be salmon trout, it was prepared perfectly, with lemon. We also enjoyed the price of less than $5.00 for the fish. And when you combine this with the $3.00 for the large beer (Palena Pilsner) that we shared, we ended up with an enjoyable meal for an amazing price.

Juyra. A casual restaurant recommended by our guide where we had two wonderful local dishes: quinoa soup and lemon trout (pan-fried rainbow trout with lemon).

Kilometer Zero. The most expensive, and least rewarding of our three meals. The meal began with a rather watery, but still pretty good cream of corn soup. The lemon salmon trout (which was a bit overcooked and dry, and swimming in a sour, acid pool of lemon) was accompanied by rice and fries. We had our meal with another of Bolivia’s pilsners; this from Huari.

We stayed at the Hotel Rosario del Largo. Our room was very lovely and overlook the waterfront. Good wifi and comfortable room. Breakfast was a little strange with very little on the buffet. No one came around to offer much else so I am not sure if they had any hot food or not. They had coffee and tea in the lobby but you were not allowed to take your cups out of the lobby area.