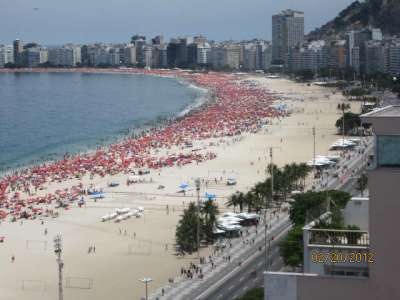 Rio’s south coastline is the playground for the rich, the sun worshipers and increasingly the physically fit. The area is limed by three beautiful beaches, each with soft white sand, gentle surf. Although all are lovely, Ipanema is the most fashionable and popular, filled with sun worshipers in various states of dress and undress. 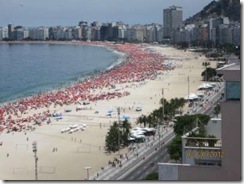 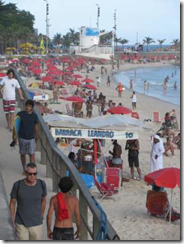 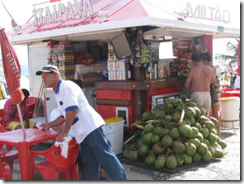 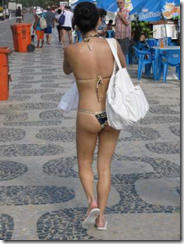 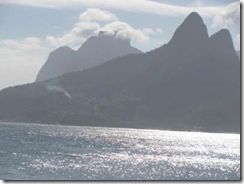 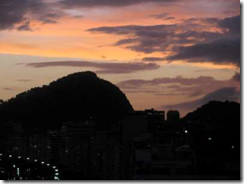 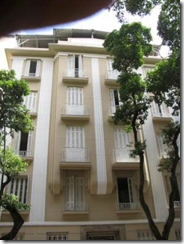 Although they are certainly lovely neighborhoods, they also have some nice amenities that are lacking in U.S cities. All three, for example, are very bicycle-friendly, with most streets having dedicated (separated from streets by curbs) bicycle lanes and stations for bikes that can be rented via cell phone. 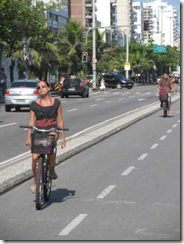 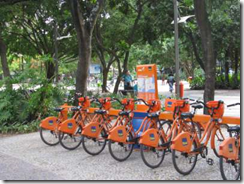 The parks, and especially the beaches also have exercise stations, with all type of equipment, from manual elliptical trainers to stations for pull-ups and even tight-rope walking. Beach volleyball nets are, of course, everywhere.  One section (which we refer to as muscle beach) has a wide range of barbells and dumbbells of all weights, made from concrete weights on the ends of metal bars, for weight lifters. Most of these stations also have guides to encourage and help people use the equipment. 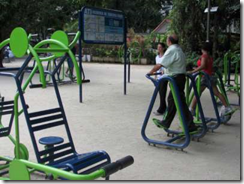 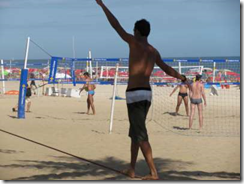 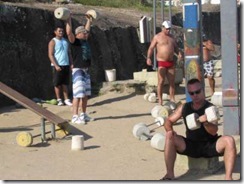 Unlike the U.S., all such facilities appear to enjoy relatively heavy use. And for those who prefer games to straight exercise, beach volleyball courts are plentiful. And for those looking for more challenging games, there is also foot-volley, which is the same as volleyball, except, that it does not allow the use of hands or arms. Players can use feet, legs, bodies and heads, but nothing below the shoulder

The parks are also dotted with public art, from sculptures to murals, to a range of hand-built creations. One person, for example, was picking up hundreds of flower that have fallen from trees and decorating a line of benches with them. Others, in celebration of Carnival, had created large, intricate and ornate sand sculptures. 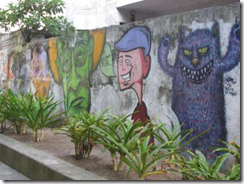 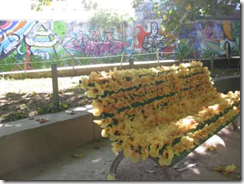 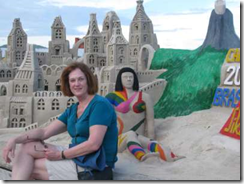 Nearby neighborhoods back off the beaches, such as Botafogo, Laranjeiras and Miraflores also have big commercial streets. Back streets in these off-the-beach sections, however, are more relaxed residential, many with nicely renovated, brightly-painted homes, and of course, their own Carnival block parties.   These neighborhoods also tend to have more surviving colonial-era buildings than do the beach communities. Some have been beautifully restored as private homes, private schools and some of the large ones, as government buildings, foreign consulates or universities. The Rio state governor’s palace is a particularly beautiful example. 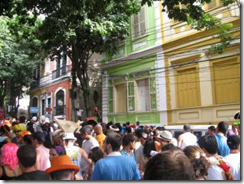 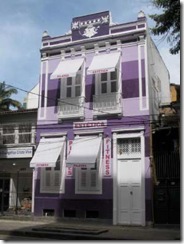 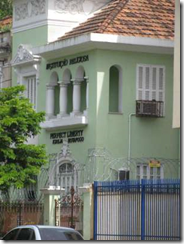 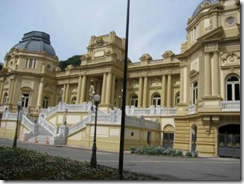 And then, a bit further afield, is the artsy, somewhat bohemian hill neighborhood of Santa Theresa which has a number of grand, nicely restored homes, murals, great views and, of course, its own block parties. Then, downhill from Santa Teresa, Lapa with its arches, restored buildings and, every night of Carnival week, the site of a virtually continuous party. 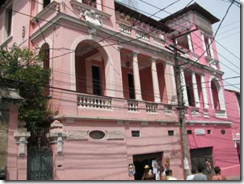 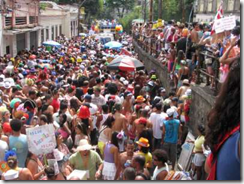 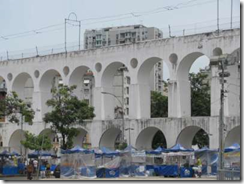 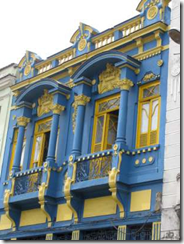 Primary stops outside of the Copacabana and Ipanema areas were in Central Historic Rio (see blog), Sugarloaf, which we hiked (see blog) and an attempted stop at Corcovado, the mountain that houses the world’s largest urban forest and is topped by the iconic Christ the Redeemer statue.

Our No-show at Corcovado

Stupidly, we got off to a late start the morning we planned to go to Corcovado for the Christ the Redeemer statue and for he views. Stupidly, however, we got off to a late start. By the time we arrived at the cog railway for a ride up the mountain, we faced a 2.5 hour wait to get up (and an indeterminate wait to get back down). Based on what we had read, and reports from David, who toured Corcovado and Sugarloaf the day we hiked Sugarloaf, we decided to skip it. We, after all, had beautiful views of the mountain and statue from our hotel room balcony, as well as from a number of points along our numerous walks. While we will probably make a special effort to visit Corcovado on our next trip, we will, for now, make do with our distance pictures and a few from David. 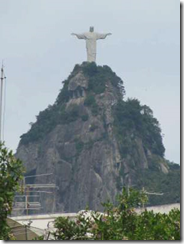 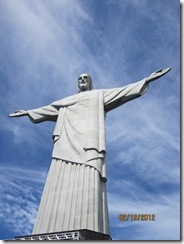 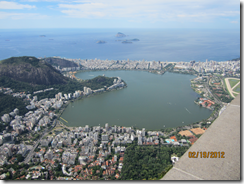 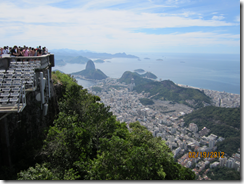