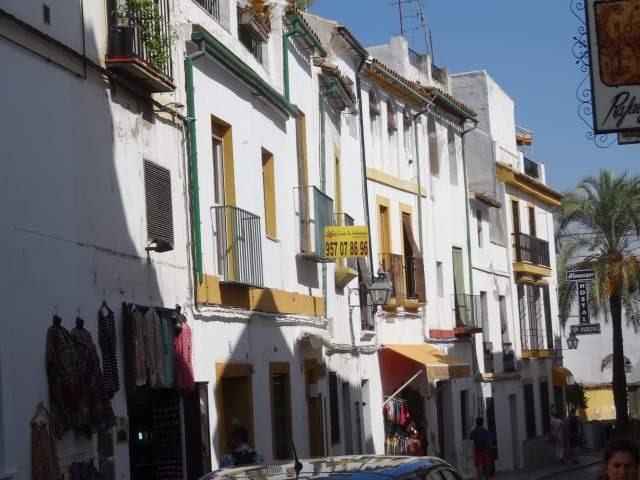 Perhaps if we came to Cordoba before Seville and Cadiz, we would have better appreciated its Old Town. True, it does have a number of narrow streets and alleys of the Jewish Quarter, lined with whitewashed buildings and touristy shops. Then there’s the Roman bridge linking the two sides of the city which is as nice as one will find outside Italy. And this is not to mention the amazing Roman/Muslin/Christian cathedral with arches that appear to go on forever, or the terraced gardens of the Alcazar. Pretty and impressive, but it didn’t engage our senses in quite the same way as the other cities. 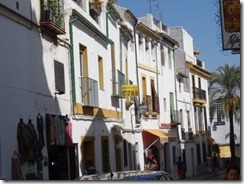 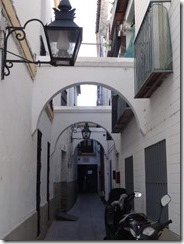 This post integrates information from our self-guided tour with that from the free walking tour guided by Suzzane.

The city was founded by the Romans. It became the capital of southern Spain, and enjoyed commensurate status and wealth under Augustine until the Visigoths took over in the 5th century, leading to a period of relative privation. Then, in the 8th century, the Muslim Moors came to power and made Cordoba a regional capital once again. Then, in 1236, the Christians took over and used Cordoba as a base from which to drive the Muslims out of southern Spain. As elsewhere in the country, they made use of the Muslim buildings and infrastructure, gradually adapting it to their own needs.

The Mezquita (aka Mosque of Cordoba)

Although Cordoba may not be quite as charming as some of the other Spanish cities we have visited, we certainly appreciated many of its sights: the number one of which is the amazing Mezquita. The Mezquita probably began life in the third century after Christ as a Roman-built Christian church (as evidenced by the mosaic subfloor beneath the current cathedral). It was taken over and used by the Visigoths who later sold the right to use part of it as a mosque to the Muslims. It was then expanded into an ornate Mosque in the 8th century and was greatly expanded in stages through the Muslim era. Then in the 16th century, the Christians, who left most of the mosque in place, built a beautiful cathedral in the center of the complex (leaving the dramatic arches and columns, elaborate carvings and mosaic designs).

But whatever the heritage, the mosque/cathedral is magnificent. The grandeur begins with the minaret (since converted into a bell tower), the entry portal and the huge bronze doors. Once inside, the center of the cathedral is dominated by the majestic alter with its huge, white, vaulted ceiling and the incredibly detailed carving of the choir.

As with most cathedrals, the sides are lined with chapels, some of which (especially the Capilla de Villaviciousa) are incredibly impressive, Even they, however, are overwhelmed by the majesty of the Islamic-arched Mihrab prayer area, that still contains a gilt copy of the Koran, and the Treasury, with its magnificently-detailed silver Corpus Christi monument. 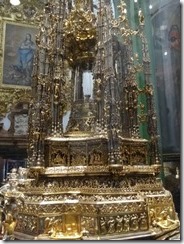 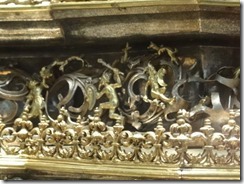 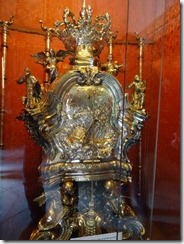 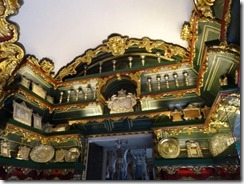 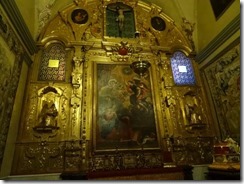 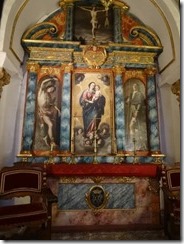 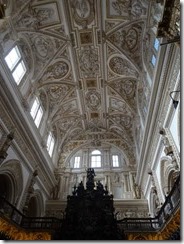 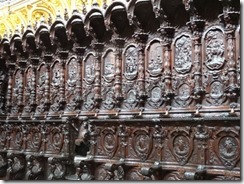 But the most incredible site of all is the magnificent series of 850 granite, marble and jasper columns and painted arches that support the massive structure. Looking at them from the side makes than appear to go on forever. And given the size of the cathedral, this is not far from the truth. Pictures cannot due this justice. 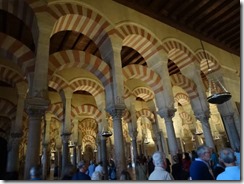 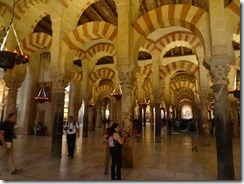 Then, outside of the cathedral, is a pretty patio, which pales in comparison the wonders inside the structure.

The current Alcazar, which is on the site once occupied by an old Roman palace and a subsequent Muslim palace, is the city’s second most spectacular site.

The current structure, built in 1328, was built as the fortress and palace from which the Christians managed the campaigns to drive the Muslims from the remainder of southern Spain. It then served and still serves as the residence of the King and Queen when they stay in Cordoba. It was also the site at which Ferdinand and Isabel approved Christopher Columbus’s initial proposed voyage. Then, more ominously, it became the headquarters of the Cordoba Inquisition, which was supposed to have been the most brutal of all the locations in Spain.

Although the royal residence is not accessible, some of the historic reception and meetings rooms are. You can walk through the ancient corridors, see the baths and ancient ruins and walk the fortress walls for views of the city and the grounds. 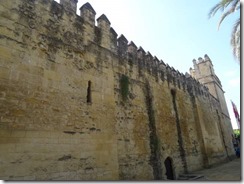 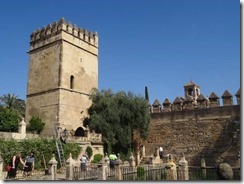 Far more interestingly and impressively, you can walk the beautiful gardens with its planting, perfectly trimmed trees and topiaries, and its series of lovely water terraces, with each level flowing down to the next and creating lovely views at each of the garden’s multiple levels. And, set in a site of honor in the middle of the garden, a sculpture of proposal to the Columbus presenting his King and Queen. 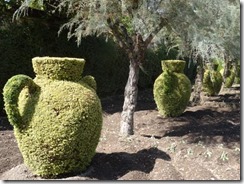 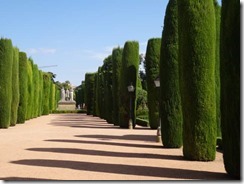 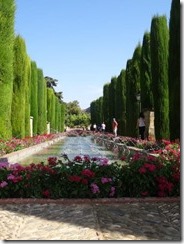 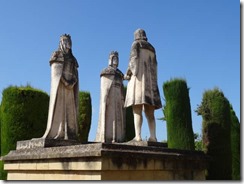 Evidence of the city’s Roman heritage are all throughout, or more accurately, underneath the city. We already mentioned the refurbished sections of the Roman ruins beneath the mosque. Parts of another recovered floor have been relocated in the Alcazar.

Some remnants are still evident above ground. The most prominent are the: 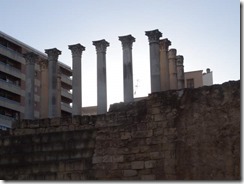 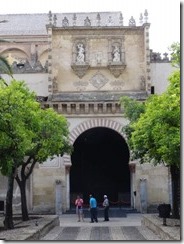 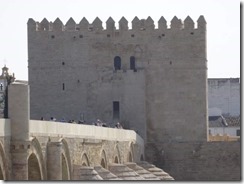 Also near the bridge, but built long after Roman times, are the remnants of the Muslim-built Caliph’s residence (long-since rebuilt as an Episcopalian bishop’s residence) and a 16th-century gate (on the north side of the river) built to welcome a visiting King Phillip II, who ironically, entered the city from another direction and never even saw the gate built in his honor. Then there is the tall, 18th-century marble statue of St. Raphael, the patron saint of Cordoba.

The Mezquita, the Alcazar and the bridge are just outside the Jewish Quarter, which is the center of Old Town. The Jews, who are thought to have originally arrived in this area in the 2nd century BC (although some scholars contend they began arriving eight centuries earlier), prospered during the Roman reign, only to be persecuted by the Visigoths. So much so that they are supposed to have opened the gates to enable the Muslims to enter and capture the city. While the Jews fared pretty well under Muslim rule, a wall was built around their neighborhood, and they were forced to speak Arabic and had to pay taxes to use the synagogue. While later caliphates turned against the Jews and destroyed parts of their neighborhood, by the early 14th century, Alphonzo XI took a more lenient approach and even allowed them to build their own synagogue (see below). The citizens, however, were less tolerant than their King and continued to persecute the Jews.

Then came the Inquisition which forced Jews to choose between death, leaving the country (and leaving all their wealth and possessions behind) or to convert to Christianity. This choice, however, required more than changing their religion. It also required that they change their names, move to homes in other neighborhoods and even change their occupations. They would, in other words, lose their entire identify and have to start from the bottom in a new occupation. And to make matters even worse, friends and neighbors were incented to identify Jews and therefore get access to the homes in which the Jews had lived.

This scenic neighborhood, based around Plaza de Maimonides, is home to many of the city’s other historic sites, These include the: 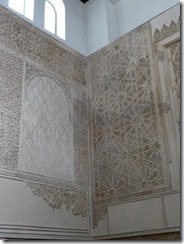 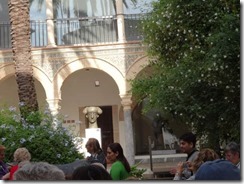 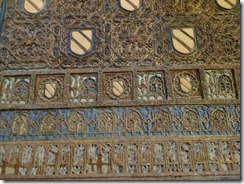 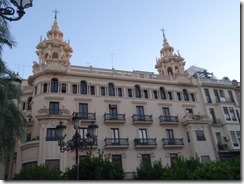 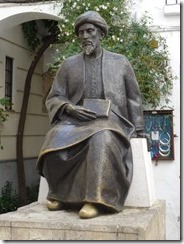 But bigger is not necessarily better. The Quarter is filled with many pretty small streets, alleys (including one pretty one that is barely more than two feet wide and ends in a pretty, tiny square) and many of the smaller churches, such as Capella de San Bartolome and the Church of San Pablo, that are among the most interesting. 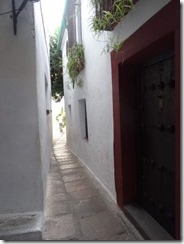 And the area is getting more and more nicely restored sites all the time, with many historic buildings already renovated and more being redone all the time.

Our exposure to the modern world, or at least to the modern section of Cordoba, was limited to our ¾-mile walk from the train station (and back to the nearby bus station) to and from our hotel. That entire trip was along a pretty tree-lined park that was studded with fountains, play areas for children and occasional stretches of street merchants. The park was flanked by multi-story apartments, hotels and retail stores.

We had lunch in two different places:

Our dinner was at Bodegas Campos, another traditional Sevillian restaurant, but with a much smaller menu. After a large, late lunch, our appetites were limited. Joyce had tuna tartar (good, but nothing special) and  Tom had a nice veal tenderloin (rare, just as he requested it) with mushroom sauce. Since the restaurant aged and served its own sherry, Tom had to try it to compare the homemade sherry with one commercial brand (both Finos). The restaurant’s Lager de Hoyos Monilla was almost as good as the Fino Electrico at a lower price. Joyce had an okay house white.

We stayed at the NH Collection Aimistad Cordoba, Plaza de Maimonides. This was a lovely hotel in prime location of old town by the Jewish synagogue. Great room with wifi, bathrobes, slippers etc. Very comfortable and great location.