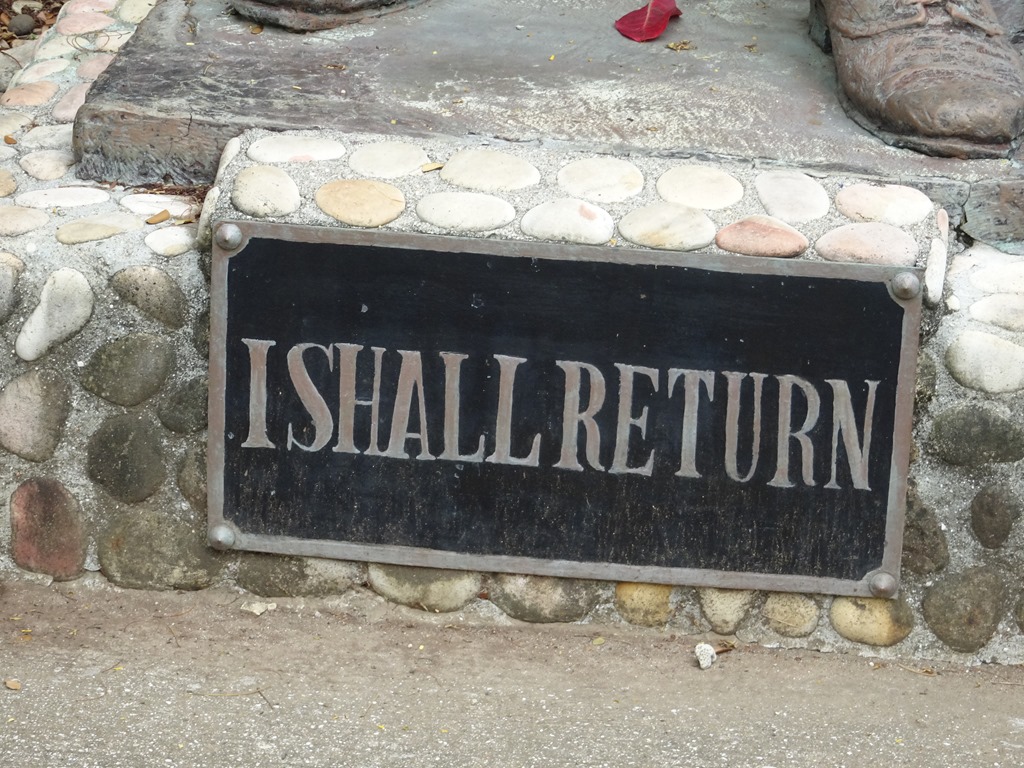 At the end of our Manila trip to the Philippines, we took a day trip to Corregidor Island. This is the largest and most strategic island in Manila Harbor. As one of the four fortified harbor islands, it had the most formidable defenses, with 42 large coastal guns and mortars, 72 anti-aircraft guns, a large network of mines and the huge, 826-foot long, bombproof Malinta Tunnel, which housed supplies, offices and a 1,000-bed hospital in its 25, 400-foot long lateral tunnels. The island was the main line of defense in protecting the city and one of the largest, most important harbors in the Far East. It was also General Douglass MacArthur’s command center at the beginning of the Pacific War and the site of two instrumental WW II invasions: One near the beginning of the war and one at the end.

The island is now a Philippine National Historic Site and the site of the U.S.’s Pacific WW II Memorial. We arranged a day tour of this island through SunCruises, which is by far the largest source of access to and tours of the island. While it normally accommodates about 300 people per day, the maintenance of one of the ships reduced the number to about half that on the day we visited. Luckily, we had also registered far enough in advance that we were among the lucky ones that actually got to go.

We were also lucky enough to have booked a walking tour rather than the much more popular bus tour of the island. And since we were the only ones to do so, we ended up getting a private tour. In another stroke of luck, we also got a relatively new guide, Capella Maria Laserna, who despite her short time on the job and her lack of a military or history background, developed an impressive understanding of the war for the Philippines and a passion for explaining the war to what she described as the small number of visitors who are truly interested in it.

The tour began at a large, bronze statue of MacArthur, with his famous quote, “I Shall Return”. 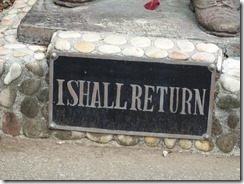 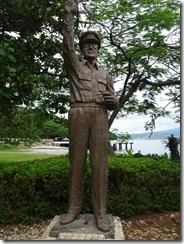 By March, 1942, the Japanese had overwhelmed U.S. and Filipino forces in Luzon and in April those in Bataan. MacArthur pulled his remaining 14,700 American and Filipino troops back to the harbor islands as a last line of defense. By that time, the U.S. determined that the Philippines could not be held and President Truman ordered MacArthur, who was in charge of the American and Philippine troops, to leave Corregidor and go to Australia, which was then being threatened by the Japanese capture of Port Moresby in Papua New Guinea. He was evacuated despite the continuing Japanese siege of the island.

Command of the American and Filipino forces were then passed to General Jonathan Wainwright. By then, the siege had been going on for more than two months and would hold out for another 1.5. During this period, Japan dropped more than 365 tons of explosive bombs plus 16,000 artillery shells on the island. The troops and the Philippine’s first family had been holed up on the island, and especially in the Malinta tunnel complex. Since supplies had been cut off, the defenders were on rations of 30 ounces of food and two drinks of water per day.

The final armed assault of the island lasted two days. While the defenders held their own for a while, the arrival of more and more Japanese troops, weapons and especially tanks, doomed the effort. Rather than a fruitless fight to the last men, Wainwright decided to save the remaining soldiers’ lives. After holding out against the siege for more than four months, he surrendered the island, his forces and the entire country of the Philippines to Japan on May 6. The final toll of the American-Filipino victory was 800 Americans and Filipinos and 900 Japanese dead and 1,000 Americans and Filipinos and 1,200 Japanese wounded.

4,000 of the 11,000 American and Filipino PoWs were held in Manila’s Bilibid Prison (see our post on Fort Santiago for more information) and the remainder were sent to PoW camps or the Japanese home islands to serve as save laborers.

The tour took us across the entire island. We walked about three miles among the largest concentration of historic sites. These included three batteries, the hospital, the huge “Mile-long Barracks” complex, parade grounds, the Museum, the Pacific Memorial, a bunker and several other sites (including a tunnel though which we decided against crawling through). The tour ended with a sound and light show that described life during the four-month siege of the Malinda Tunnel. Among the primary sights were: 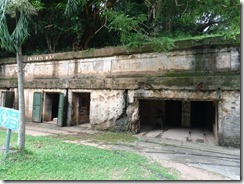 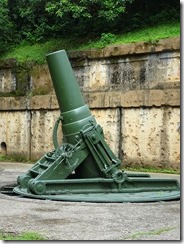 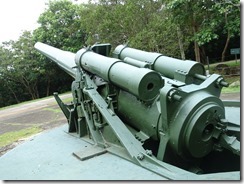 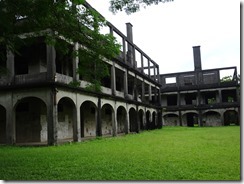 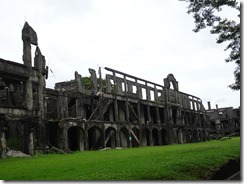 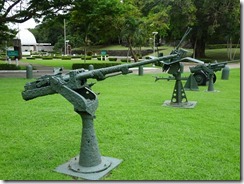 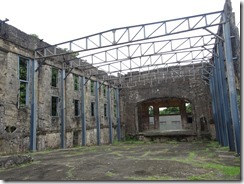 Although we walked a few miles among the greatest concentration of sites, the island is too large to cover by foot within the roughly six hours we had on the island. So, while the other 148 people were crammed on a few trams, Joyce, Capella and I had our own private tram,

We rode across the island, with Capella pointing out and briefly discussing and explaining the significance of about a dozen additional sights, ranging from batteries, to tunnel entrances and Japanese gun emplacements. We made a brief, ten-minute stop at the Heroes Memorial, which contains statues of four Filipino revolutionary heroes, murals that memorialized four attempted revolts and inside, a display of painting that portrayed some of the many atrocities the Japanese perpetrated on Filipinos, including the notorious Hell Ships, on which prisoners were held in such cramped, filthy and disease-ridden conditions that many died and a number were actually driven insane.

The tour ended with the sound-and light show in the Malinta Tunnel. We walked between many of the laterals in which were dioramas, accompanied by narratives that explained the siege of the island and life in the tunnel, from the beginning of the siege to Wainwright’s reluctant decision to surrender the remainder of his troops, and the country of the Philippines to the Japanese. 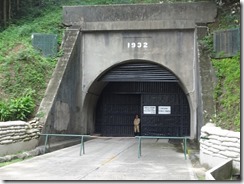 The end of the Philippine nightmare came shortly after February 1945 recapture of Corregidor.

Between January and March of that year, 55,000 Allied troops reconquered the northern Philippines, invaded the island of Luzon and retook Manila—a series of battles that ultimately cost a total of 7,000 American and 17,500 Japanese lives.

By August 1945, America had firebombed Tokyo and a number of other Japanese cities, recaptured the land that Japan had conquered during the war and by August, faced with the decision to physically invade Japan or drop the atomic bomb, had devastated Hiroshima and Nagasaki. Japan accepted Allied unconditional surrender terms five days after the Nagasaki bomb, thereby ending the war and beginning the reconstruction of Asia and the Pacific.

MacArthur, of course, made good on his promise. On October 24, 1944, a few hours after his troops landed on Leyte, MacArthur waded ashore and declared in a radio broadcast, “People of the Philippines, I have returned!” In January 1945, his forces invaded the main Philippine island of Luzon and on February 17, Corregidor. They recaptured Manila and Luzon in March, although Allied forces continued to face scattered resistance until the end of the war. But while the Japanese were finally defeated, the costs of losing and recapturing the Philippines were great. In the end, only one-third of the men defending the island in March 1942 survived the end of the war.

While the Manila region was not a favorite of ours, we were glad we got a chance to see this piece of history. Still, unlike MacArthur, we will not return—at least to Manilla