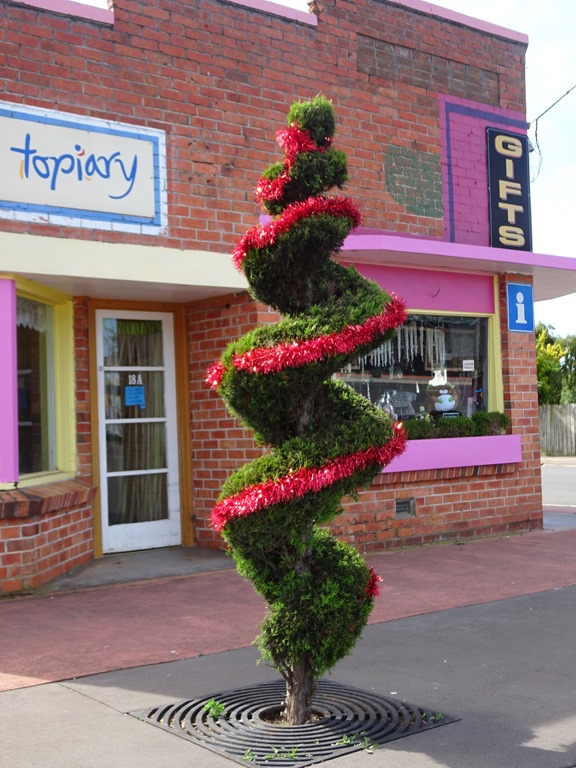 The last stop of our initial exploration of Northern Tassie was what is generally considered to be the jewel of the Tasmanian national parks—Cradle Mountain National Park. On the way, we discovered a jewel of a very different kind: A town that bills itself as the “Town of Topiaries”.

While driving in Tasmania, one drives through many small town. One labeled itself as the “Town of Topiaries”, which peaked our interest. The main street is planted with evergreens that are all trimmed (by the city) into a spiral shape—including one that is decorated for Christmas. More impressively, many homes and business create and maintain their own topiaries, in whatever design they choose.

Some are individual animals, such as horses, reindeer and elephants. Others are combined scenes, such as a man guiding a plow that is being pulled by a bull. Meanwhile, the supplier that provides the wire for all of these has a field dedicated to topiaries including Pac-Man-like figures, a shark and a couple cars. Even the town’s veteran memorial gets in on the act with three soldiers standing at attention.

A wonderful diversion from a long drive. 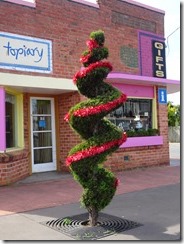 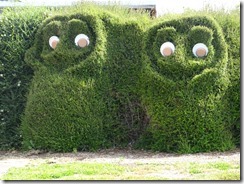 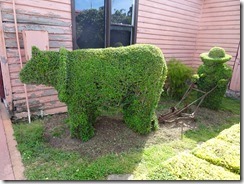 Better yet was our first view of the massive, saw-toothed Cradle Mountain, emerging, soaring, at least as it appeared from a distance, out of a broad, flat plain. Too bad the entry to the park, with its miles of scarred, clear-cut forest that so diminished the impact of the majestic mountain. 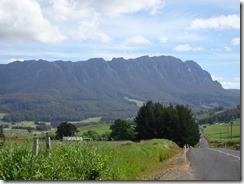 Cradle Mountain was our primary northern Tasmanian destination. Rugged, raw and teaming with wildlife. The park starts at about 2,600 feet in altitude, and is one of the most scenic spots on the island. It is also home to some of the greatest concentration of virtually all its endemic wildlife—not to speak of great trails and rewarding views. Created by repeated glaciation that scoured and shaped the granite peaks, the area was later home to Aborigines, before being invaded by western hunters, miners, lumbermen and farmers. A couple settled here and invited guests to explore its beauty. The government eventually declared it a national park, which ensured its long-term protection. It now offers magnificent natural scenery and a protected home for plants and animals that have effectively lived here from long before Australia broke off from what was then, a semi-tropical Antarctica.

We arrived early evening, just in time for an hour walk through a rainforest to a couple of waterfalls, of which the smaller, three-cataract Pencil Pine Falls was the prettiest. But while the falls were the ostensible objectives of this walk, we equally enjoyed the rainforest itself. A forest of live, semi-live and dead trees and decaying log. But everything in the forest; whether the live trees, the mounds of decaying wood, the soil or the rocks; all succumb to layer upon layer of moss and lichens. That is what really defined the forest.

The waterfalls and forest were only some of the charms of this lovely walk. You enter and exit through a meadow that looks strangely deformed. Instead of a flat or rolling expanse of grasses and bushes, it is a field of roughly foot-tall clumps of grasses that have been so compacted as to feel like soil. The mounds, however, weren’t soil. They were clumps of grass and bushes that were compacted in solid masses by huge, fat wombats that continually pushed back into the mounds while grazing the grasses and digging for roots. Wombats such as the roughly 200 pound beast that was grazing its way through the underbrush of some bushes as we ambled past.

They are frequently joined by wallabies that enjoy the same types of grasses. But no fear, there is plenty for all. Not to speak of the quolls and devils who prowl the grounds in search of an easy meals. Or the piercing shrieks of the devils that literally shred the night. 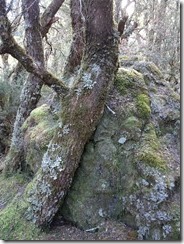 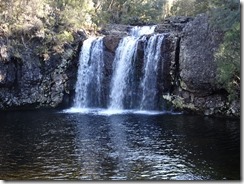 The large park has two areas, each accessible from different entrances. We spent our day in the northern section, which is home to the big scenic draws of the tranquil Dove Lake and the saw-tooth majesty of the 1,545 meter Cradle Mountain and its shorter (by whole 18 meters) next-door neighbor, Smithies Peak. Our hike entailed a circumnavigation of the lake via a combination of high-elevation trails that provided incredible views of multiple lakes and mountain peaks from the tops and sides of some of the park’s tallest peaks. 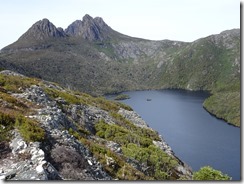 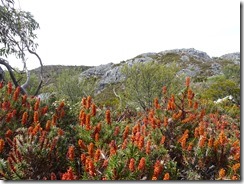 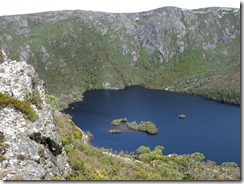 Our hike began on the 850-meter south bank of Dove Lake, where we scaled the very steep, 1,185-meter Hansons Peak—a jagged granite monolith that was three-quarters hike, and one-quarter climbing—including with the indispensable help of a chain—the steep, jagged cliff and enjoying the view of what appeared to by an “infinity Lake” that fell into a steep gorge. 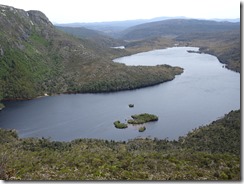 Climbing down the other side, we reached a saddle where we climbed the Face Trail to about 1,250 meters, just below the crest of Little Horn and, at the face of Smithies Peak, down the long-steep (again chain-assisted) granite track to far western shore of Dove Lake. This took us from the dry, alpine climate and short, tough and stunted shrubs into the depths of a lovely tropical rainforest where, as in the previous day’s rainforest, moss and lichens rule. 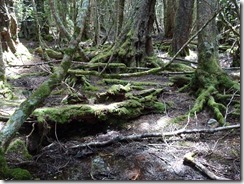 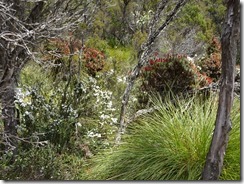 Then after a seemingly unending series of ups and downs—and about eight miles and 2,500 meters total elevation gain, we returned to our starting point. A beautiful hike, which included three mountain lakes and incredible mountain views. And hopefully, a tiny preparation for the final leg of our trip which includes the five-day Milford Trek across New Zealand’s Southern Alps.

Overland Track is a long, multi-day hike that we were not even prepared to venture. We did, however, walk a couple kilometers of the trek as a late afternoon walk. The meadow-like area beginning at the Ronny Creek trailhead, is lined with big tufts of grass, the bases of which are compacted, old-age stalks that have hardened, and the tops of which spray long blades in every direction—with each tuft as tall as a meter high and a meter in diameter. It was scattered with groves of untrimmed palm tree-like ferns that were up to about four meters tall. The grasses, meanwhile, were like a wombat heaven, with more than a dozen—totally oblivious to the presence of photo-shooting humans—munching contentedly on the plentiful grasses. 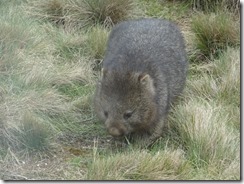 Enchanted Trail, next to the Cradle Mountain Lodge, meanwhile, was a haven for wallabies, with about half a dozen within about 50 square meters.

Although we were also hoping to see some Tasmanian devils and quolls in the park, that was not to be. Joyce, however, did hear the unmistakable screeches of a couple of devils one evening. Tom, who spent his time watching a documentary on devils, managed to miss the real-life action.

Restaurants are few in this remote area. We ate at 2 places that were within our lodging

Peppers Cradle Mountain Lodge was in the national park. As expected, it was very rustic but the the rooms are as comfortable as you can get in such a remote area. No wifi in rooms, but they provide it in the lodge. Rooms have a fake fireplace for heat. But you come here for nature, and nature you get. The animals are right outside your large picture window. A beautiful setting.