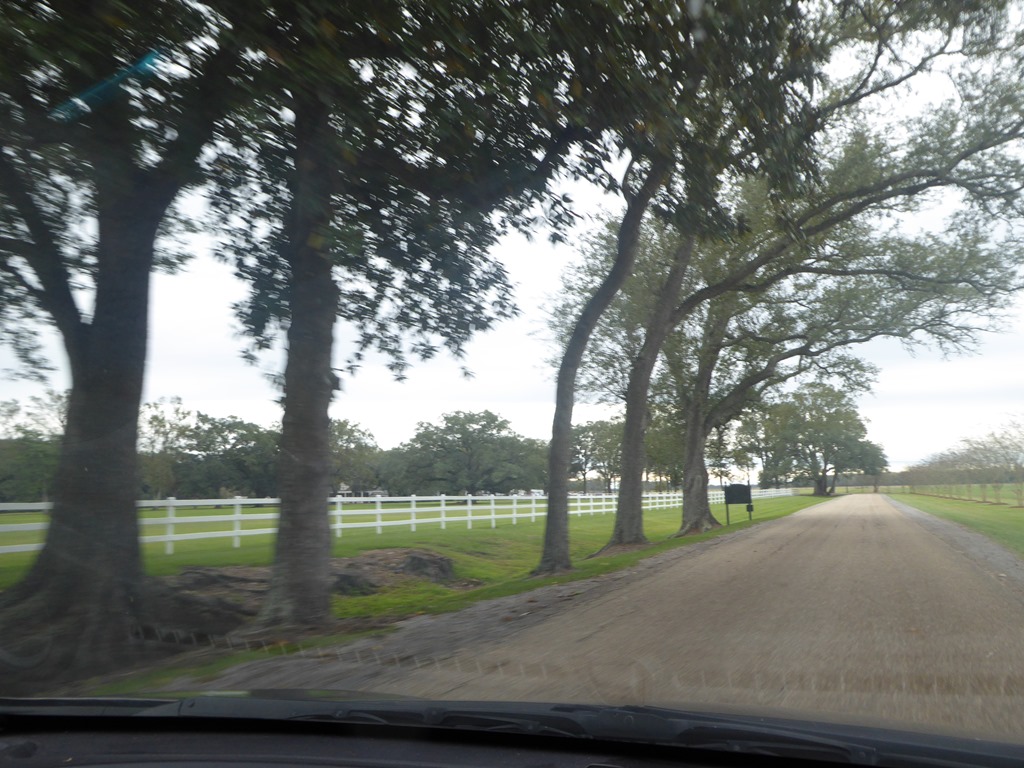 While we were in New Orleans, we rented a car for the day to spend a little time exploring some areas outside of the city. After about an hour expressway drive west, almost to Baton Rouge, we exited the highway and followed the Great River Road partway back, past a flame-belching oil refinery and an industrial plant emitting smoke that was so dense we could barely see. After that, however, we passed a few of the remaining plantation homes that had radiated out from the river’s levees. As shown in an old map, there used to be about 600 plantations. These ranged from fairly small ones with no or only a couple slaves, to very large, ones  with hundreds of slaves. While some of the plantation homes were the great, white, gabled mansions that we see in movies, many of those owned by cultured Creole families were small and not at all ostentatious.

We passed a few of these 18 remaining plantation homes, had lunch at one (Oak Alley) and took an historical walking tour through another (Laura).

Oak Alley Plantation offers a tour of the large plantation house and slave quarters. But since we planned to tour only one plantation, we settled for looking at what we could see without paying admission (the large home at the end, and a handful of support building along the sides of the lovely oak alley that gives the plantation its name) and to eating lunch there. The crawfish etouffee with fried catfish was pretty good, but the fried oysters were small and dry—not very pleasant.

St. Joseph’s Plantation, was a small (for a plantation home) privately-owned place that is visible from the road, but not open to the public. But we could stop from the road and take a picture.

Laura Plantation, which like Oak Alley, was a major sugarcane plantation (run by about 200 slaves at its peak), has a smaller (5,000 sf ft), unpretentious main house that is designed in traditional southern style, with an above-ground basement door surrounded by a dual-entrance staircase that leads to a large front porch and front door.  It was here that we took a tour.

We started in the basement, with a fascinating discussion of how the home was built in 1805 by highly-skilled, rented slaves who created the home from scratch. They dug and dried the mud from along the riverbank to create bricks, cut and cured cypress wood from the swamps, and then precisely cut and numbered each piece of wood that would be used in the 30-post house (supported by 30 columns). While this preparatory process took 11 months, the entire construction process—which used wooden pegs and not a single nail—took only 11 days! Some of these wooden pegs and numbers are still visible.

Three generations lived in the house including the original matriarch (who grew up on her family’s own plantation) who desperately wanted to move to France. While she succeeded in marrying a man with a chateau in Bordeaux, he died before they could move, leaving her with money and a love of Bordeaux wines. Although family circumstances prevented a move to France, she did remarry, bought the land, built and managed the plantation, and accumulated a large collection of Bordeaux wine, which was stored in the basement (in a very unsuitable climate with no air conditioning or humidity control!).

Though the tour of the pretty, but far from luxurious home, the gardens and the slave quarters, we learned much more about the family (including the miserable matriarch , the prodigal son, the free-thinking son and of course, Laura, the granddaughter after whom the plantation was named.

Our primary interests, however, were primarily focused on broader issues, such as the nature and economics of plantation life and the lives of the owners and the slaves. Among the interesting facts we learned:

We also learned (as we already knew) that masters could be excessively cruel, especially to slaves who tried to escape. Our guide told one story of a slave who frequently tried to escape. One time, the owner (remember the above-mentioned miserable matriarch?) personally branded her initials into the slave’s cheek. This same slave, however, did once succeed in escaping and joined the Union Army. When the war ended, he, like many other emancipated field slaves, lacked the skills required to get other good jobs. He, like many other freed slaves, also had family and friends back at the plantation. He (and many others), therefore, returned to the same plantation to perform the same type of work. The difference: these free slaves were then paid for his labor, typically at rates between $15 and $25 per month, depending on skills. Even so, by the time they paid room and board, they usually ended with little more than they had before. So much for freedom, at least for those who lacked marketable skills.

We then moved on to visiting Thibidoux branch of the Jean Laffite National Historic Park. This branch’s mission is to explain the culture of Le Cadiens–the French Canadians who left Nova Scotia to settle in the Louisiana bayous. The displays briefly described and provided examples of different aspects of the Acadian lifestyle. These included their:

The exhibit and one of the many short informational movies that are run on request, also discusses the grave damage to both the bayous and potentially to all of southern Louisiana by the artificial levees and flood control systems. These systems prevent the river from changing course, and thereby creating new wetlands and deltas. Moreover, they prevent 64,000 tons of sediment per day from replenishing current wetlands, from fertilizing downriver farms and for creating the types of natural nurseries in which baby fish and shellfish have a chance to grow before they venture out into the bay. These wetlands, which are disappearing at a rate of 80 square miles per year, are also instrumental in helping to protect the land from hurricanes.

One of the movies also provided a brief history of the War of 1812 and especially the decisive, but ultimately meaningless, 1815 Battle of New Orleans. It explains how renegade privateer Jean Lafitte detected the massing of British ships, warned local officials of an impending attack and volunteered his and his Baratarians services in defending New Orleans in return for amnesty from several charges against them. It showed how this preparation allowed the city to build defenses so strong as to allow Andrew Jackson to not just defeat, but to devastate the British Army while suffering only a handful of U.S. casualties. This battle, in turn, made Jackson a national hero and was instrumental in his election as president. The museums also explained how the Union’s capture of New Orleans early in the Civil War spared it much of the deprivation and destruction suffered by many major southern cities.

The museum also staged an art exhibit of watercolors that portray the beauty of and lifestyle in the bayous.

From there, we headed south, through the bayous, to the town of Thibidoux, where we visited a branch of the Jean Lafete National Historic Park that examined Acadian bayou culture. Acadians, as discussed in one of our Nova Scotia posts, were French Canadian farmers who, when the British forced them out of Canada, moved to the still French-controlled southern Louisiana.

On our way back to New Orleans, we drove to the suburb of Metairie in anticipation of seeing what is supposed to be the beautiful Christmas lights display at City Park. We were very disappointed to learn that the display had been suspended for a week and would resume the day after our visit. Oops. It pays to read the Web site more carefully. And since we went after dark, we also missed the park’s other big attraction, its art museum and sculpture garden, although we did manage glimpses of a few of the park’s lit pieces and some of the pieces locked for the day in the gated sculpture garden.