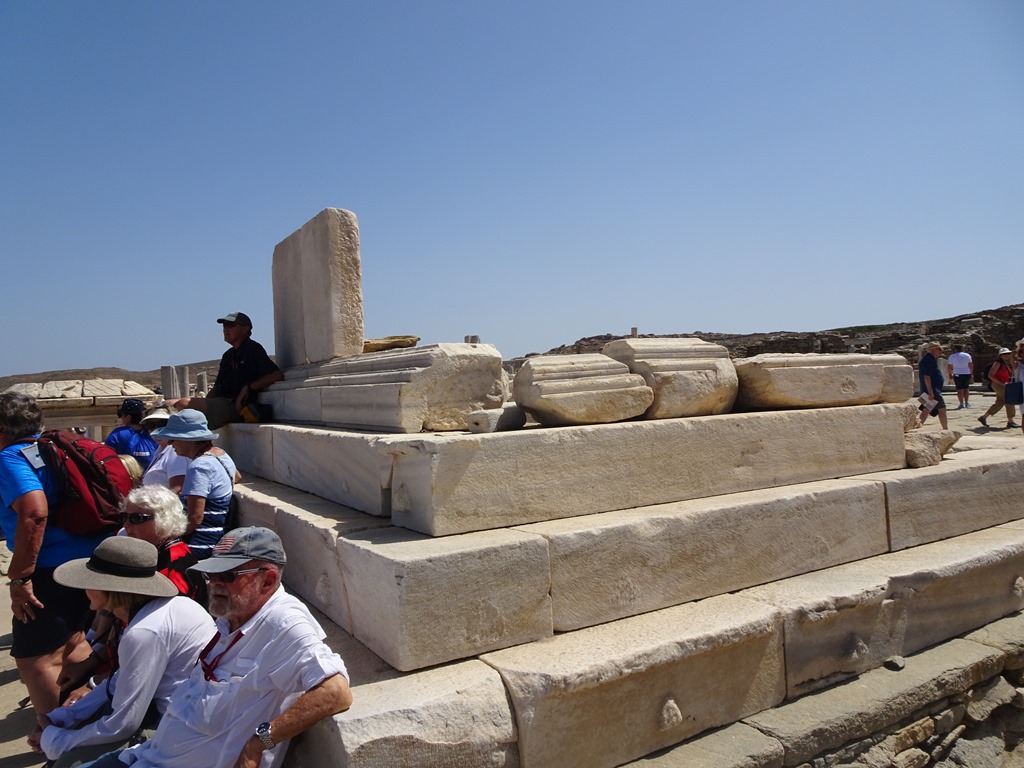 Delos is a small island near Mykonos that is currently uninhabited, other than a caretaker who lives there to prevent vandalism. But if only its walls could talk.

According to legend, it was the birthplace of Apollo, King of the Gods. In reality, it was founded by the Ionians about 2500 B.C. and settled by the Mycenaeans about 1000 B.C. It became home to a sanctuary to Apollo (god of light, harmony and balance) and Artemis (the moon goddess). and emerged as one of the ancient Greek’s most sacred spots and pilgrimage sites. It was home to the Delta Festival, in which city-states gathered to honor the god with song and athletic contests.

Then, about 2,000 years ago, Delos began to evolve into an important and prosperous Aegean trading center. Both of these roles—religious site and prosperous secular city—can now be seen at the Delos UNESCO World Heritage Site and Archaeological Museum.

We took a half-day guided tour of the open-air museum with Delos Travel. After a 30-minute boat ride, our guide began with a brief orientation about Delos and its history. This began with the story of how Apollo, and his twin sister Artemis (who is named Diana in Roman mythology), came to be born on such as dry, barren, treeless and very windy island. As the legend goes, Leto, after her illicit affair with Zeus, was banished to this baron, uninhabited island (already a religious sanctuary), where she gave birth to and raised her children.

Based on this heritage, the Mycenaeans established it as a religious pilgrimage site. Despite its harsh environment, the island attracted more and more settlers who overcame its environment and leveraged the island’s central position in the middle of the Cyclades to create a commercial and shipping center. By 478 B.C. the Greeks and the rest of the Hellenistic world, had come to fear Persian expansion into the Aegean and their religious sites and created a confederation, the Delian League, to protect the area. Delos, which became its headquarters. This further spurred Delos’ growth as a commercial center.

But Aegean power politics as they were, Athens, the leader of the League and the controller of its treasury, became uncomfortable with Delos’ commercial ambitions. It used its power to “purify” the island and return it to its original roots as religious center. This included exhuming dead Delians from their graves and persecuting and depriving many of its then residents of their rights as citizens. But when the Macedonian king, Philip II, his son Alexander the Great and their successors gained and exercised control of the Cyclades in 314 B.C., they were much more willing than Athens both to accept Delos’ dual religious/commercial role and to fund the development of many new temples, including the huge temple to Apollo. However, by 166 B.C., the Romans gained control. Although they tolerated, and generally supported Delos’ religious and cult roles (they, after all, honored most of the Greek Gods, albeit often under different names). Generally, however, they were much more interested in the island’s commercial development, than in its religious purity. They greatly expanded the size of Delos’ port and declared the island a “free port” for all commercial activity in the central Mediterranean. This drew merchants, shipowners and bankers to the island. Rapid commercial growth brought growing wealth, the building of luxurious homes and additional investment in both civic infrastructure.

But neither the Roman Empire, nor Rome’s rule of the Cyclades lasted. When the Turks took over, they and bands of pirates aligned with them, raided and looted the city, destroyed some of its critical infrastructure (especially its critical water retention and distribution system) and ended up massacring an estimated 20,000 Delians. This led to the effective desertion of the island and centuries of additional looting, ending only in 1872, when the island became an internationally protected archeological site and excavations, which continue to this day, began.

The site has been extensively cleaned up, with excess dirt and materials removed, walls stabilized and architectural decorations, statues, mosaics and other artifacts moved to museums in Delos, Mykonos and Athens for protection (although some have been replaced with replicas). The structures, however, have not undergone any reconstruction. Other than the abovementioned intervention, the site remains as it was found in the late 19th century.

After learning this history, we entered the first of a number of agoras (marketplaces), this the 2nd-century B.C. Agora of the Competaliasts. While it was primarily a marketplace for the residents, it did double duty as a slave market. It is also home to a couple small temples, including one to Hermes. 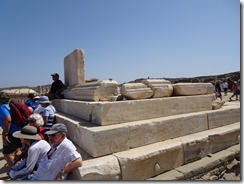 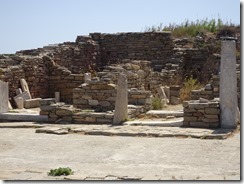 Turning left takes you to the Sacred Way and the city’s religious and ceremonial section; to the right, to one of the city’s primary residential quarters. We began to the right, through narrow, stone-paved alleyways among the incredibly well-preserved walls of a number of houses where we learned about the basic architecture of the buildings, including either the entire lack of or only tiny windows to protect residents from the sometime fierce winds and cold winter temperatures. To provide heat, occasional fireplaces. For light, alcoves into which olive oil-burning lamps were placed. And while most furniture was made of wood, and therefore long-since disintegrated, some homes had stone bench seats and beds (upon which cushions and mattresses would be placed) built along the walls. While most of the buildings were built entirely of local stone, some demonstrated their wealth through the occasional use of imported, and therefore expensive marble (primarily from the island of Naxos). 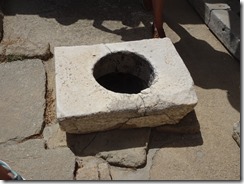 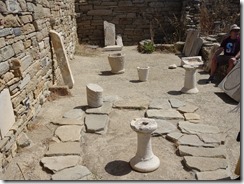 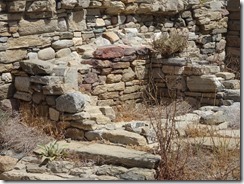 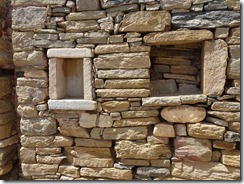 We then entered the Theater Quarter, the section of the city, near the theater and the sea that was favored by the wealthiest citizens. These large houses, unlike most of those of less well-to-do owners, had many rooms, courtyards and porticos for light and air, marble floors and columns, mosaic floors, frescoed walls and private wells. We stopped at some of the most impressive of these homes for a closer look, and deeper explanations of many of their unique and most luxurious features. Among our stops were: 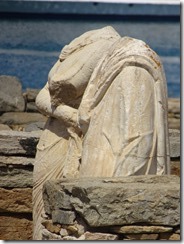 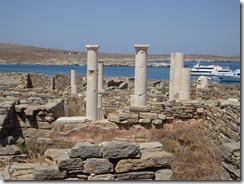 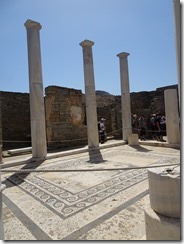 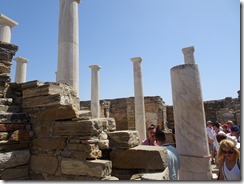 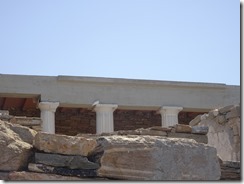 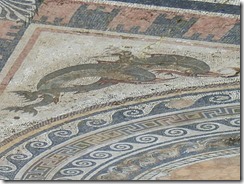 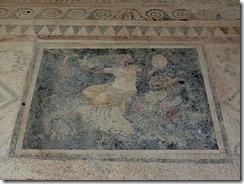 Delos Theater. This impressive marble theater, which took 30 years to during the 3rd-century B.C., was constructed into a natural amphitheater. It accommodated an audience of about 6,000 with the first few rows, with built-in back supports, reserved for nobles and aristocrats. The other rows, by contrast, offered only basic stadium seating. Used primarily for performances, different parts of the stage were reserved for actors, for dancers and for the orchestra. The theaters, however, also had additional uses. It was, for example, used for public ceremonies and most importantly, as a as one of the city’s primary means of capturing some of the island’s very limited rainfall. The large marble stadium was built with a drainage system that channeled all rainfall into a multi-chamber granite, arch-roofed, granite (which, unlike the island’s limestone, does not absorb water) reservoir that channeled water to other parts of the city. 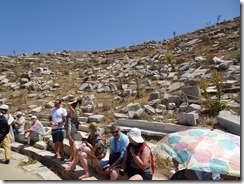 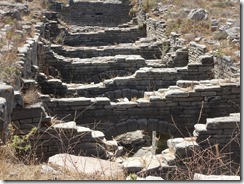 We then walked back though the residential section to the Agora of the Competaliasts to the northern side of the city in which most of the primary temples and religious sites were located. We walked along the Sacred Way, the broad avenue between two large porticos (the South Stoa and the Agora of the Delians). 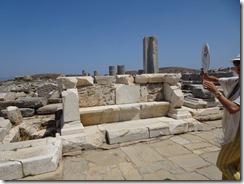 We stopped at a few of the most important and some of the most intact of these sites where, as we were reminded, that the natural stone walls we were seeing and the many statues that surrounded them were, in Greek and Roman times, all brightly painted. The sites included the: 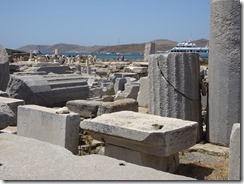 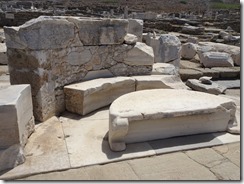 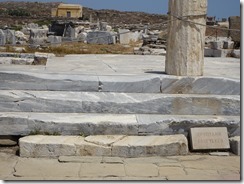 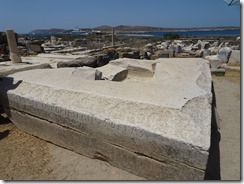 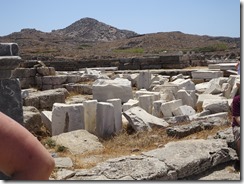 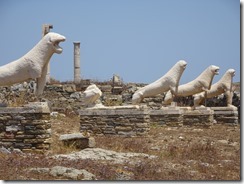 We then explored the museum which houses the quite worn, but still very impressive, remaining five original lions, each of which are roughly ten feet long and perhaps five feet high. It is easy to imagine how impressive and fearsome these creatures would have been to people who have read, heard and possibly saw pictures of, but had never before seen an actual lion. 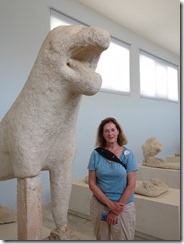 The museum also contained several dozen other original statues recovered from the site, a number of which retain incredible detail and some of which are quite lovely. These include Hellenistic-era marble statues of Apollo, Artemis and Leto, an intricate representation of Artemis (the archer) killing a deer, several kores, heads of beautiful women and handsome young men and several of Greek gods, demi-gods and nymphs. There are also several nicely carved Roman-era statues, including emperors and military officers. 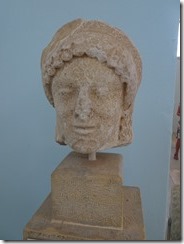 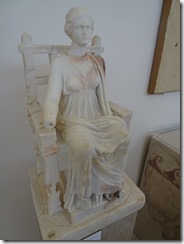 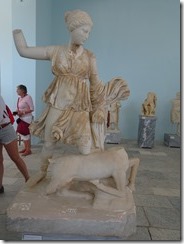 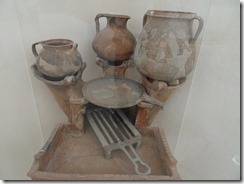 Delos Beyond the Tour

Although the tour generally covered about two-thirds of the ruins, a good portion of what we passed, and much the remainder of the site essentially consists of rubble that is almost impossible, except by trained archeologists, to identify and interpret. There are, however, a number of relatively intact structures, some of which we passed (albeit not always fully appreciated) on our own, after leaving he museum.

There is, for example, an area past the Lion Terrace with a number of workshops and business establishments including potters and bakeries. Beyond that, a headquarters for an association of merchants, shipowners and bankers. To the east, the Stadium Quarter, which houses the gymnasium, the stadium and several other buildings. Another section, past the museum, is home to a number of other sanctuaries, including those to Egyptian and Syrian deities, and a number of associated temples. There is also a sanctuary of Zeus and Athena and a grotto dedicated to Heracles (Hercules).