Door County Wisconsin is on a peninsula between Green Bay Wisconsin and Lake Michigan Wisconsin. It has 19 communities and 300 miles of shoreline around a laid-back resort peninsula that protrudes into Lake Michigan. While its initial economy was based on fishing and shipbuilding, it is now focused on artists and tourism. Sound familiar? It is the Midwest’s answer to Cape Cod. Or for that matter, The Florida Keys, North Carolina’s Cape Hatteras or Washington State’s San Juan Islands. But unlike many of these other tourist havens, most of the development is on the inland side of the peninsula, facing Green Bay and the mainland, rather than on the Lake Michigan side.

Door County has a lot of beautiful little towns and gorgeous scenery. 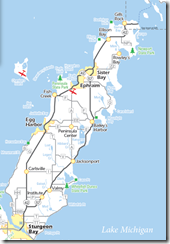 Algona is a lovely historic town with more than two dozen well-preserved 100 to 150 year-old commercial and residential buildings and a dozen reproductions of period murals (on brick walls) in a compact downtown area. A couple blocks away, it also has a very credible winery. 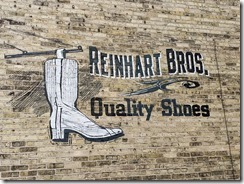 Von Stiehl Winery is the oldest winery in the state. Founded in 1967, it offers more than three dozen different still, sparkling and fortified wines. While most are sourced from California and Pacific Northwest grapes, it also produces a few wines with local fruit, including Marquette, Marechal Foch, Fontenac and dessert and fortified wines with local apples and cherries. We sampled several of its wines, enjoying several, particularly the 2010 Yakima Valley Cabernet and 2012 Mendocino Ridge Zinfandel, and a couple of its apple-based dessert wines including its moderately fortified (12.9 percent alcohol) Apple Icing ice wine and heavily fortified (20.5 percent alcohol) 2016 Apple Bounce.

Sturgeon Bay is the county seat of Door County. The rather non-descript town has more than 9,000 residents. It’s main street (Rt 42) has buildings date from 1835—the oldest in the country. We stayed at the lovely Foxglove Inn, a beautifully restored 1877 mansion built as a single-family home by a wealthy quarry. lumber mill and shipyard owner. 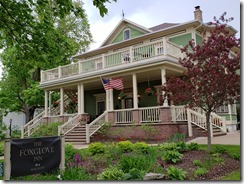 We had dinner at the town’s premier seafood restaurant: Crate. Crate specializes in seafood, offering range of fishes, Japanese-style rolls and select sashimi and nigari. Although we felt that the tempura shrimp was overly battered, we both enjoyed the rare ahi with daikon and wild rice (Joyce opted against the spicy rub normally used on the tuna). While Tom took a flyer on the baked cedar planked whitefish based on the server’s recommendation, he recalled why he did not care for the oily fish. Our server graciously offered to replace it, which Tom did with an okay roll consisting of an extravagant combination of ahi, avocado, jalapeno, salmon, tobiko and crushed macadamia nuts with unagi sauce and spicy mayo. We both enjoyed two of the cold sakes–a Japanese Tozei Snow Maiden and especially the G Joy from Oregon.

We made a quick spin to the lake side of the island for a peek at Baileys Harbor. It has three lighthouses to protect ships from the hazardous shoals that have claimed more than a dozen ships, many of which are supposed to be visible via clear-bottom kayaks and especially by scuba divers at depths of only about 15 feet. Although we did not get a chance to explore the wrecks, we did enjoy the pretty Anclam Park. The park has a nice swimming beach and especially an old jetty that has been transformed into a nicely landscaped park that extends out into the lake, providing a pretty view of the peninsula and nearby islands. 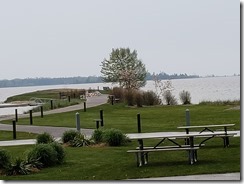 Egg Harbor is a pretty town with its own line of large front homes along White Cliff Drive. We also discovered a particularly noteworthy art gallery and sculpture garden Edgewater Orchard Gallery. It has a wide selection of art in all media: from jewelry, oil paintings, art glass, turned woods, and all sizes and shapes of sculpture displayed in a pretty sculpture garden. 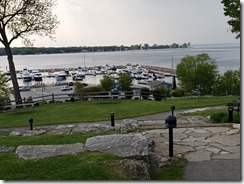 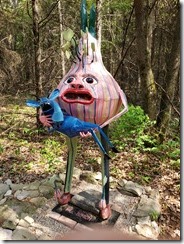 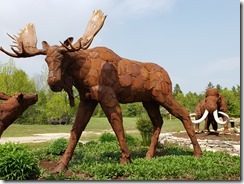 Fish Creek has a pretty downtown. The area also has several nice stops. 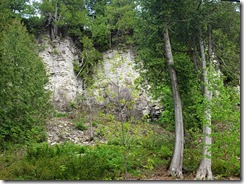 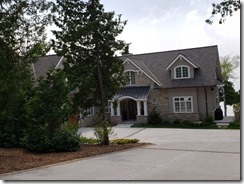 We were less impressed with Door Peninsula Winery, caring for neither the fruit nor the California-sourced grape wines that we tasted.

Our Fish Creek restaurant experience was rather neutral. We ate at Barringer’s Restaurant, were we split a lobster roll, interestingly enhanced with fried capers and pea sprouts that would have been nice, other than for the quantity of mayonnaise in the lobster salad.

An 1853 Norwegian settlement (as commemorated by a number of historical sites), it is now the primary commercial hub of the upper peninsula, housing many of the area’s restaurants, much of its lodging and many of its stores, including the old-fashioned Wilson’s soda parlor. 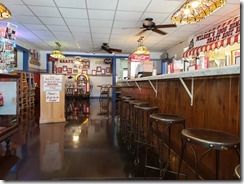 Its Harbor is a primary base for water activities, including for cruises past Peninsula State Parks sea-carved cliffs and what is supposed to be (although not on the day we were there) the area’s best sunsets. We caught part of (at least the non-eating part) of a one hundred-year Door Country tradition—Fish Boils. A large pot of boiling water is set on a large stack of continually refreshed firewood. When ready, onions, potatoes and spices are added, and when ready, the fish (while it used to be all types of fish, it is today Lake Michigan whitefish). When the cook decides the time is right, he pours a can of kerosene into the fire. This results in such a flash of heat sand fire that the pot boils over, carrying the rapidly boiling water and the oil of the whitefish surging out of the pot, into the fire (resulting in smoke and steam) and signaling the dramatic end of the cooking ceremony and dinnertime. 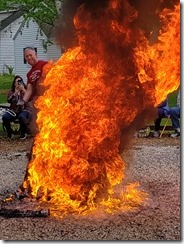 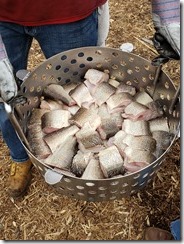 We experienced a fish boil many years ago and decided it wasn’t our preferred seafood meal. We therefore, opted for dinner at Sister Harbor’s Lure restaurant. See below.)

A pretty harbor with a waterfront pavilion on the park, galleries and boutiques and most notably, Al Johnson’s Swedish restaurant, not so much or its Swedish-tinged food (such as lingonberry pancakes and Swedish meatballs) as for the goats that munch on its sod roof. Door County Creamery, meanwhile, has a nice, albeit pricy) selection of soft chevres, including wild ramp, whitefish, truffle and cherry. 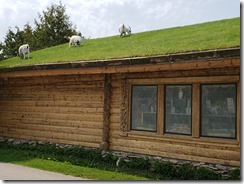 We also had our favorite Door Country dinner in the town, at Lure. This upscale seafood-focused restaurant offers a menu of seafood, ranging from local whitefish and Walleye pike, through Alaskan halibut and king crab legs. We began with the rather starchy, but tasty clam and corn chowder and Caesar salad, moving onto grilled Alaskan halibut with mango salsa and wild rice pilaf and panko-crusted Walleye with tartar sauce, smashed potatoes (both with green and yellow beans). Although the halibut was particularly good, the Walleye was tasty, although somewhat dry. Dinner was accompanied by a 2015 Ken Wright pinot noir.

A tiny, largely fishing and farming communities are at the farthest point of the peninsula and the point at which you catch the ferry to what we have been told (but did not ourselves visit), the ultra-rural and secluded Washington Island. It was the stretch of water between Northport and Washington Island that gave the county its name. (The French apparently, named the stretch Porte de Morts (Death’s Door) for the treacherous passage that claimed a number of Indian lives and later, French, British and American ships.) Our primary impressions of the land, however, came from the large orchards of apple trees that were in full bloom when we drove through. 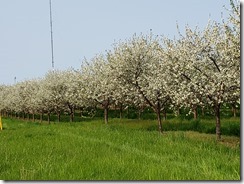