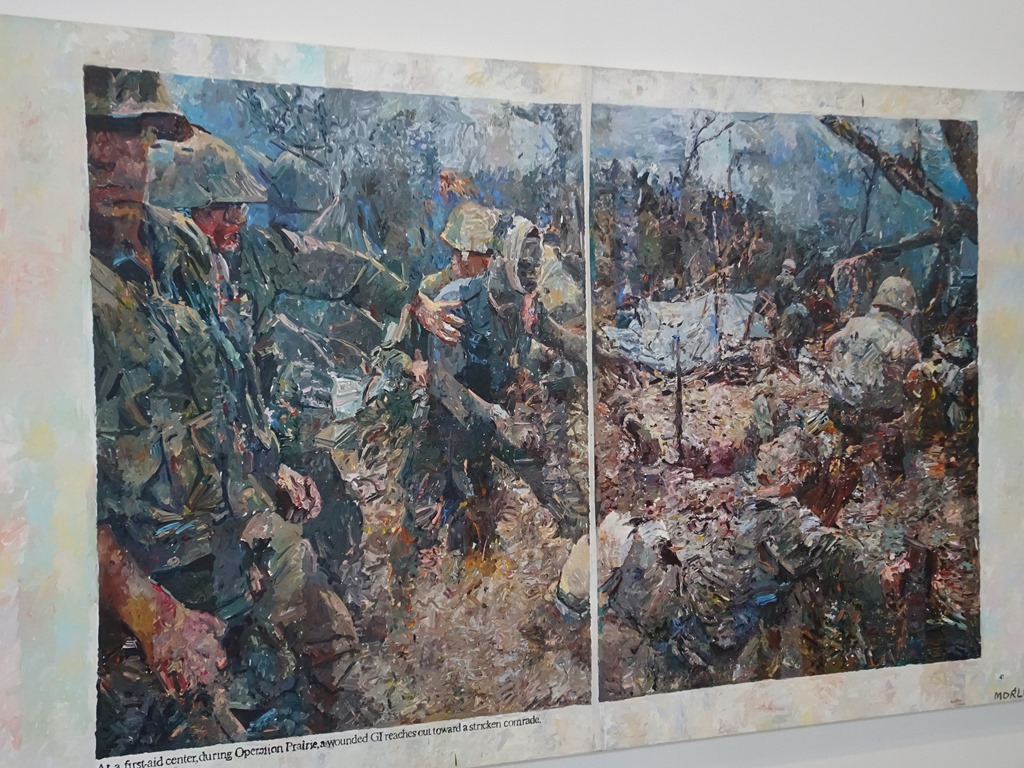 Our brief, three-day LA visit ended with a visit to the rapidly reinvigorated downtown LA. Although we planned to visit the increasingly hip Koreatown section, these plans were scotched when we discovered that “Here’s Looking and You”, the hot, new restaurant that we planned to visit, was closed the one evening that we were able to visit. Nor was the Museum of Contemporary Art, which is located across the street from the Broad Museum (our primary downtown destination) open on the day we were visiting. So we were forced to find options.

This museum (pronounced Brode)  forms the backbone of the Eli and Edythe Broad family collection of modern and contemporary art. Housed in a fascinating Diller Scofidio + Renfro building whose mottled, pocked exterior provides a vivid counterpoint to its shiny, smooth next-door neighbor, the amazing, Frank Gehry-designed Walt Disney Concert Hall. Across the street in another direction is LA’s Museum of Contemporary Art, with its striking “deconstructed” airplane sculpture towering over its entrance.

The Broad’s collection is spread across two floors–the first and the third, with the second being occupied by administrative offices and a storage area that is interestingly viewable through two windows.

The third floor houses the museum’s permanent collection which contains dozens of pieces from many of the world’s (albeit overwhelmingly American) premier modern and contemporary artists. The floors main lobby is dominated by a few of Jeff Koon’s iconic balloon sculptures, a monumental 82-foot long Takashi Muakami painting and a couple of El Anatsui’s sheets made largely of recycled bottle caps.

Some artists, such as Warhol, Sam Francis, Elsworth Kelly and Roy Lichtenstein have full galleries devoted to their works. Although our downloadable audio guides did not work due to difficulties with the museum’s WiFi network, many works were accompanied by interesting narrative panels, such as those that explained how Lichtenstein readily “appropriated” many of subjects and themes from artists ranging from Delacroix to Monet (not to speak of daily comics), and rendered them in his famous Ben-Day Dot patterns.

Most other artists are represented in galleries that are shared with other artists with whom parallels can be drawn between their works. One gallery, for example, explains the friendship and common street art roots of Jean-Michel Basquiat and Keith Haring, and how their works evolved into gallery art. Major, and often multiple important works by many other leading modern and contemporary artists including Ed Rauschenberg, Cy Twombly, Anselm Keifer, Sigmar Polke, Chuck Close and Cindy Sherman are also represented.

There are also many works by less well known artists, many of whose works were particularly striking, Among these are: 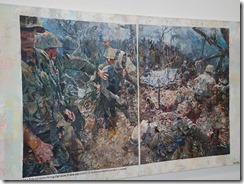 Some pieces, meanwhile, strike less serious notes. Consider, for example, Robert Therein’s 10-foot tall set of tables and chairs which provide something of an entertaining, interactive relief to many of the museum’s more poignant works and themes. 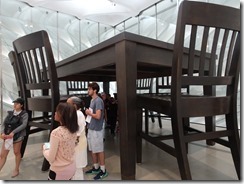 While the second floor is dedicated to administrative offices and storage, even this floor provides a degree of interaction via stairway windows that provide views into the museum’s large, amply stocked storage area.

The first floor houses a large museum store and several galleries dedicated to temporary exhibits. The highlight, from what we have heard and read, is Yayoi Kusama’s “Infinity Mirrors—The Souls of Millions of Light Years Away”. This mirrored room, which allows only one visitor in at a time is engulfed in a series of seemingly endless sea of colored LED lights and is limited to one minute visits. Even so, it can accommodate only a small portion of daily visitors. Since visitors can only reserve times when they arrive—and since we did not arrive until the afternoon–we were not among the lucky few.

Even so, we did enjoy the other of the floor’s temporary exhibitions. Occulus is a multi-artist presentation of dozens of paintings, sculptures, video and multi-media works that are intended to illuminate the complex, typically hidden managing forces and processes that define our day-to-day lives in our contemporary, global society and economy. Some of these works portray the huge scale or these infrastructures and processes, some the monotony of stultifying, impersonal processes, and others the apparent randomness of global economic exchanges and even of games. These include: 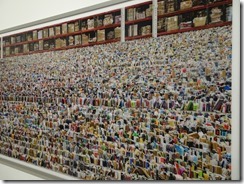 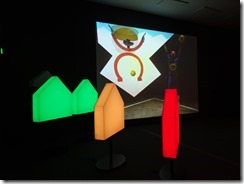 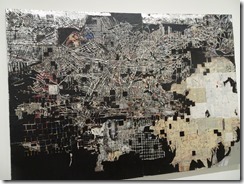 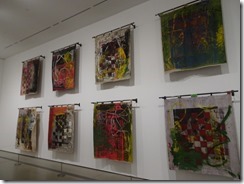 The exhibit also includes some fascinating videos, including one that represents the monotony and seeming meaningless of some day-to-day office work and another the vast gulf between Egyptian men and women.

Pez Cantina.Our concierge recommended it and we were in the mood for Mexican preparation of fresh seafood. The concept, however, was more interesting than the preparation. Our two main lunch courses, of fried oyster tacos with cabbage pico de gallo and salsa negro and fried yellowtail grilled Mexican sandwich with cabbage pico de gallo were both disappointing (both over-breaded and the yellowtail mushy and oysters lacking of taste). This being said, we did enjoy the qualcamole and especially the dessert of flan and conda leche cake with raspberry and blueberry compote and chocolate sauce.

Chaya, an Asian influence restaurant that specializes in seafood, where we began with two small plates—a fascinating sounding sea urchin ice cream monaka with port wine sauce (moderately interesting with a layer of uni over an uni infused ice cream what was somewhat masked by the pastry shell in which it was served) and a nice Japanese wild mushroom toast. We especially enjoyed a shared main course of sake-steamed yellowback seabream that was tasty and cooked to perfection. We had these with two different, but nice sakes: a relatively dry Hakkesan Junmai Gingo and a fruitier G junmai.

Sea Grill. Our last lunch before leaving on a flight to Bora Bora, where we began with a nice, if somewhat greasy frito misto (shrimp, calamari, fish, zucchini) with marinara sauce, and followed with two main courses. Both the Ecuadorian shrimp and grits with merguez sausage ragout, and the wild Ecuadorian swordfish (with zucchini and brown butter sauce with capers, were quite good. So too was the service.