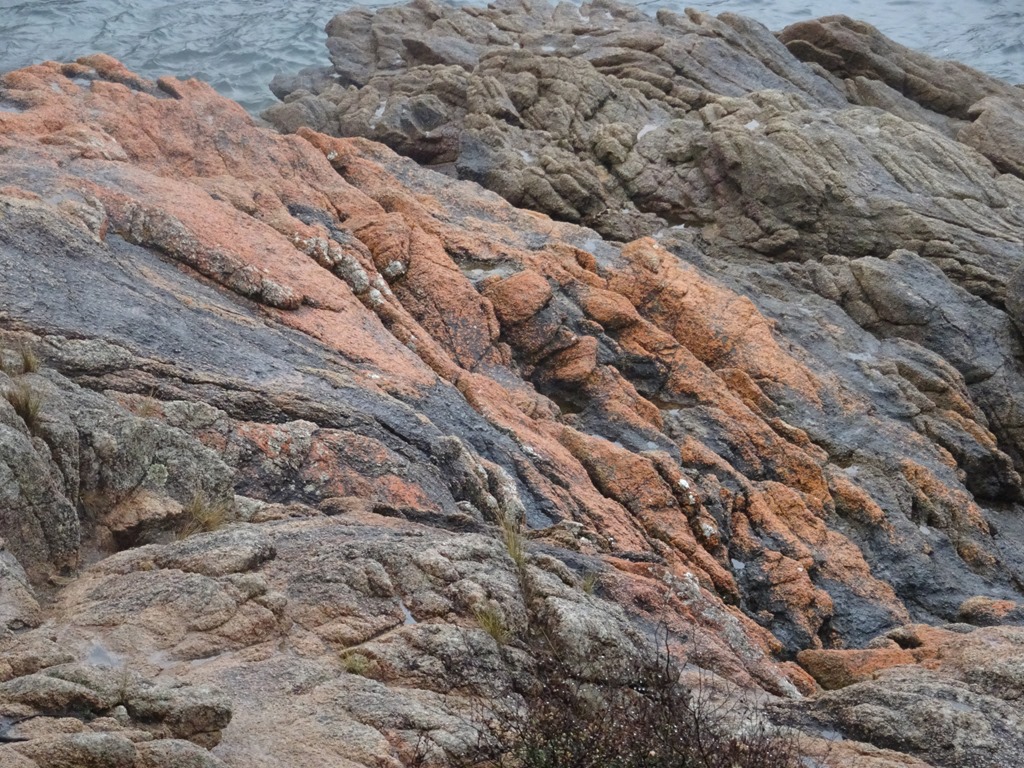 We left the southern part of Tasmania and drove to Tassie’s east coast primarily to explore the rugged coastline. But it just so happens that Tassie’s east coast is a premier source of many  of the island’s oysters and much of its other seafood—and it also happens to have some very credible wineries. What more could we ask for? It became a must-explore place.

Freycinet National Park is a lovely spot, occupying the bottom two-thirds of the Freycinet peninsula, with its rugged coast line interspersed with sandy beaches, its 2,000-foot mountains and its reddish, pinkish and orangish (depending on the light) granite mountains (the roughly 1,000-to-1,400 range called “The Hazards”) and boulder-strewn coastline.

Since the park is only sparsely served by roads, the best way to see it is to strap on a pack and join one of the hiking tours that traverse the park over several day hikes. Since our current visit was so short, and since it was raining most of the time, we did only a few short trails. And since the entire park was enveloped in fog on the first day of our visit, the sweeping panoramic views for which the park is best known were merely memories for photos we had seen. For example: 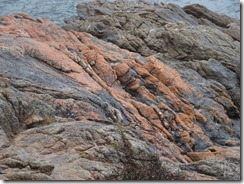 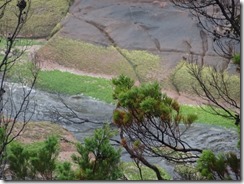 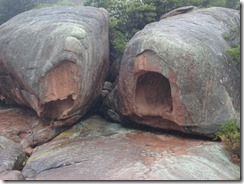 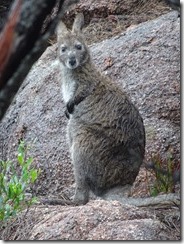 Dense fog or not, we were able to capture magical views such as this from many areas of the park. More than enough to make us anticipate a longer walks, and ideally panoramic views, the next day when we were  rewarded by clear skies, sunshine and moderate temperatures. We began with a roughly 30 minute, 1.5 km steadily, but not especially steep uphill climb to overviews of Coles Bay and, at the top, the park’s most popular view of Wineglass Bay. We then continued another 1 km down a very steep, very long set of quasi-steps formed from granite rocks, followed by another 1 km of a relatively gentle path down to Wineglass beach. Although we did not take the full 20 minute walk along the beach to get the classic view of the granite “The Hazards” mountains, we did get enough of a view to last us until we could return to the car. 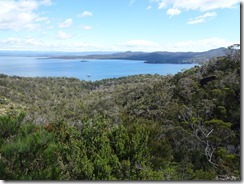 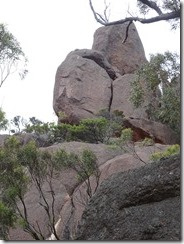 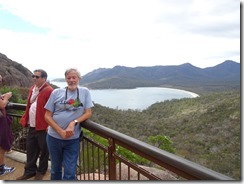 Our worse fear of hiking back up the very steep hike back up to the lookout (and then the return hike to the car) was  unfounded and we managed the hike without much trouble. Then we drove back up Freycinet Peninsula, savoring the  beautiful views of the mountains that had eluded us the previous day.We didn’t see all four of the peaks at once, and not the significantly taller peaks—but definitely enough to provide a feel for the park’s beauty. 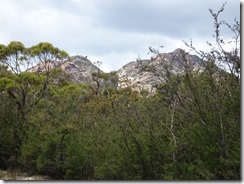 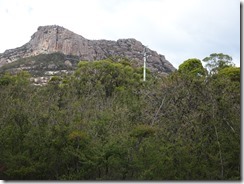 Although few of the views provided the pink, red and orange colors of the underlying rock, we did get occasional glimpses when the sun hit exposed rock in the right way, and especially when the layers of dirt had been rubbed off. 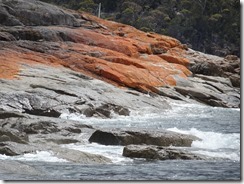 Getting Up Close to Tasmanian Wildlife

We exited the peninsula and headed up the coast to Natureworld Bicheno. This sanctuary for injured and endangered wildlife cares for and rehabilitated animals, participates with other sanctuaries and zoos in endangered species mating programs and, wherever possible, embeds chips into animals that are reintroduced into the wild.

The nature park has it all (or at least most of it)—emu, ostriches, kangaroos, wombats, echidna, wallabies, bandicoot, quolls, sugar gliders, potoroos, bettongs, possums, Tasmanian masked owls, Tasmanian masked owls, Goshawks, eagles and dozens of other species of indigenous reptiles, amphibians and birds. And yes, there were also several Tasmanian Devils. About the only creatures missing were platypuses and koalas. A number of the animals are threatened and some, such as quolls and the devils are officially endangered.

True, we did see some of these animals in the wild—including kangeroos, wallabies, wombats, echidna and koalas. We did not, however, see anywhere near the number of animals as at the reserve. More importantly, seeing them is not understanding them.

We began our explorations on our own, while waiting for a tour to begin. A few of the animals in which we had the greatest interest were in sight. Most, however, were deep in their burrows or hidden in tall grasses and many are normally nocturnal. No fear. Luckily we were on time for one of the scheduled feeding tours in which the keepers, who obviously have deep relationships with and love of the animals, coaxes or carries the animal into the open, and provides fascinating details about their lives and feeds them. Our detailed, 1.5 hour tour was fascinating. Among the animals we met and the many fascinating details we learned were: 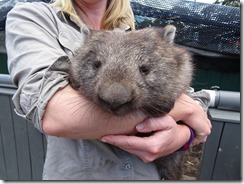 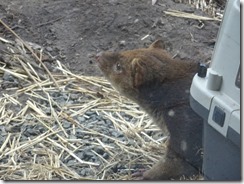 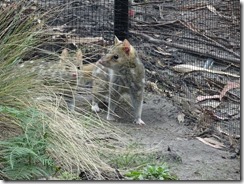 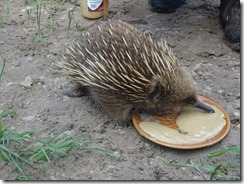 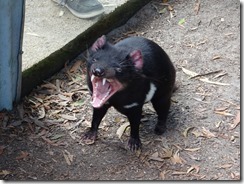 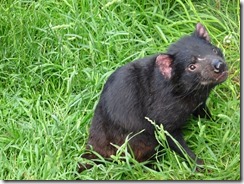 Among the other animals that we saw on our own or that the guides briefly discussed were: 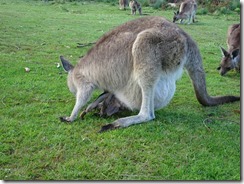 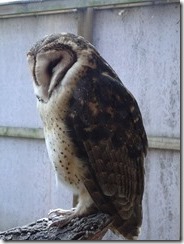 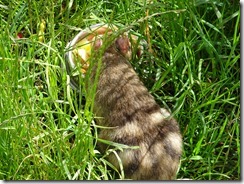 As we mentioned, this is oyster country. We hit two open-air cafes owned by Freycinet Marine Farms, the island’s largest provider of fresh oysters and mussels. We stopped and had different dishes at each of them for a two-stage lunch:

We stayed at the Freycinet Lodge in Coles Bay. This lodge was typical of what you would find in a U.S. national park. Lodge and buildings look rustic but room is very comfortable. Wifi does not work in cabins but works in main lodge. Other than the wifi, it was very comfortable.