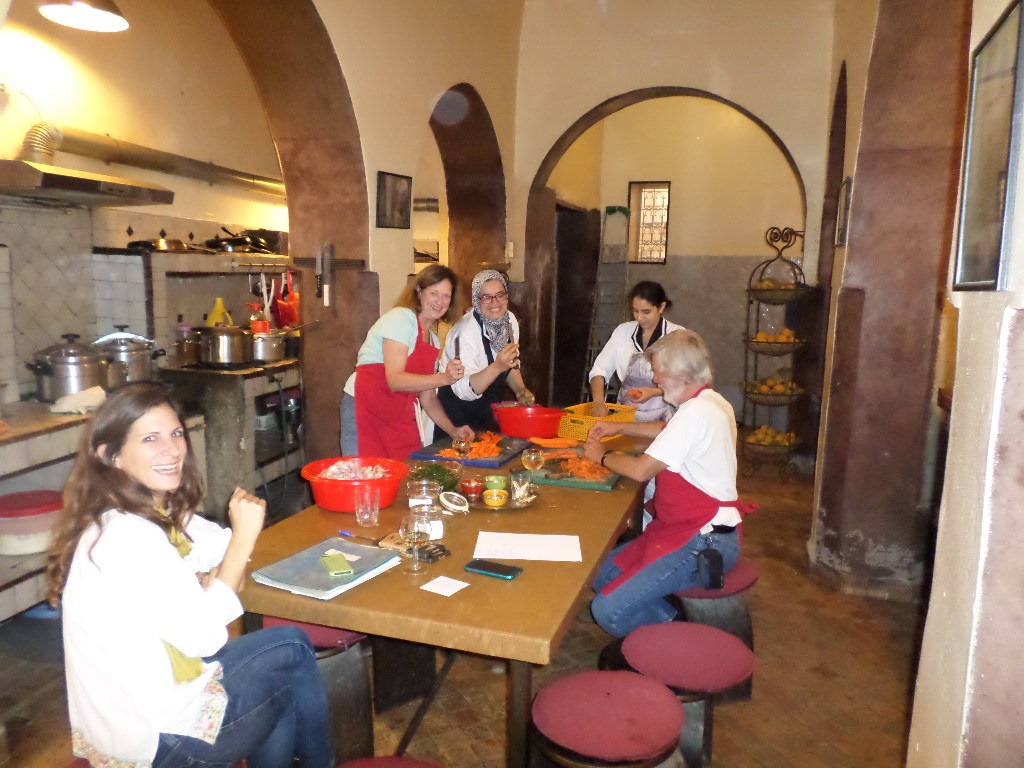 Since we stayed in Fez Morocco for multiple nights, we had the opportunity to try out several restaurants.

Riad Laaroussa, the riad in which we stayed, has its own restaurant atop the riad, from where you can get a lovely view of the Old City. It, like some of the city’s other riads, serves a single multi-course meal each day. We ate dinner there 2 nights (see below for our review of the hotel itself).

The first night’s meal began with an appetizer of three samosas (meat, vegetable and cheese), followed by delicious chicken tagine, and ending with a tasty slice of apple tart. Our wine was a 2012 Vobubillion Classic, which is primarily Cabernet with Syrah and Tempranillo.

After Dar Bensouda introduced us to Chicken Pastilla (see below), we discovered that not only was the same dish on the following night’s menu at Riad Laaroussa, but that we could take a free cooking class to participate in its preparation. Although the “class” was more of a chopping and peeling exercise than a class, and the chef’s measurements were measured in pinches and handfuls rather than grams or ounces (similar to how Joyce’s aunt and grandmother cooked), we learned the basics (and looked up the finer points on Epicurious.com) and enjoyed the conversations (especially when Cathy, one of the Riad’s owners) joined us for a couple glasses of wine and conversation. 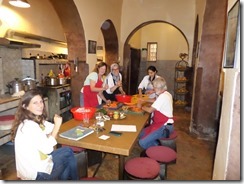 As for the dinner, which began with a Moroccan salad (separate mini-tagines of zucchini and carrots, which we did not enjoy, and lentils and especially butternut squash, which we did) and ended with a very dense, very dark chocolate tart. The pastilla was pretty good, but a bit too dry for our tastes (we will compensate when we make it at home). Maybe that was because we had a hand in making it??? We also experimented with the wine, a 2011 Beavallon Carignon which required a very good decanting.

Dar Bensouda, another dinner spot, is a 17th-century palace that has been renovated as a beautiful inn. As the norm in Morocco, this was a multi-course meal. We had a Mediterranean salad as our first course that consisted of six decent sized plates of vegetables including marinated squash, barely cooked carrots, peppers and onions, beets, eggplant and our favorite, some form of slightly candied baked root vegetable (with which we weren’t familiar) with raisins. Tom then had lamb tagine with prunes and almonds (pretty good) while Joyce’s steamed herbed chicken was so tough and dry that she returned it. The replacement came in the form of Chicken Pastilla, a delicious minced chicken with herbs and crushed almonds in a thin pastry shell topped with cinnamon and a touch of powdered sugar—the best dish of the evening. This was followed by what was labeled as apple tart, but was actually a pile of tasty baked apple slices (with no crust). Wine, which we brought with us from our hotel (since the Dar does not sell wine), was a 2011 Chateau Reslame blend of Merlot, Syrah and Cabernet from the Atlas Mountains (where we will soon be).

Dar Roumana. Although our dinners have been all Moroccan food, we were in the mood for a little variety, so we chose a Continental restaurant. We were excited to see lamb kefta and hummus on the appetizer menu, but were disappointed with the execution of both. The kefta was very dry and the hummus too spicy four our tasty. The main dishes too were disappointing. Tom’s roasted veal papiette filled with spinach and feta with sage sauce was okay, except that the veal was tasteless. Joyce’s pan-roasted Omhrine (like sea bass) was dry and tasteless—and there was so little of it). The dish consisted primarily of peas, artichokes and lima beans. Our wine, from another Moroccan winery, was a nice 2012 syrah from de Soroua.

Wrecked Garden. A delightful place that looks like a semi-abandoned garden amid the ruins of an ancient wall. Although the food did not quite match the charm of the atmosphere, it was pretty good. We began with a smoked aubergine spread with a soft cheese spread and lemon jam to be eaten with bread. Then came two tagines. The beef kefta with almonds and eggs was the better of the two, with the saffron vegetable and potato being decent, but certainly not memorable. 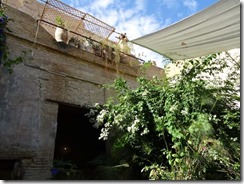 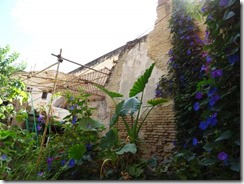 Clock Café. A pretty multi-story restaurant and cooking school in a mid-sized dar had two big draws for us: Camel burgers and date and almond milkshakes with homemade ice cream. The camel burger, cooked medium rare, just as we requested, is not bad; a bit sweet, but dry and not especially tasty (even with café’s spicing. Better was the lamb burger (also medium rare), but packed with taste—albeit with a bit too much garlic. The only real flaws came in the use of a too strong white onion and its sweet, jam-like Taza ketchup. The shake, meanwhile, was delicious—predominantly date flavor with almond overtones.

As mentioned above, we stayed at the Riad Laaroussa. But before we got to the hotel, we had arranged transport from the train station to the riad, which was a good idea because you have to walk the final way to the riad with a porter to take your luggage. This place is something of a work of art. After walking through a dented metal door from a rather dingy alley, you enter a totally renovated 17th century mansion, built around a lovely garden and decorated with tiles, carved wood, plaster and stained glass. It was lovingly restored/rebuilt as a boutique hotel. The owners, Fred and Cathy, are usually roaming around and interacting with guests and watching to make sure the staff is tip-top (and with one exception, every single staff member that we encountered gave A++ service). They appear to know each staff member well and even take them all on a yearly trip. Now that’s a way to get excellent loyal staff. No request was too difficult. The goal was to please us, and please us they did.

We had to navigate some old twisty stairs to get to our room, but once there, the room was huge with a large sitting area right outside our door. A/C worked well. Wifi was spotty but that is an issue with the Moroccan provider (in a conversation with Fred, he has put in extra equipment to try to solve the problem but is still reliant upon the carrier). We ran into a similar issue in Tangier for the same reason. We had a good shower (some of the rooms had tubs, but not us). Breakfast was on the top floor (which is also where dinner is served)…outside when the weather was good and inside when it was raining. You had a beautiful 360 degree view. The room itself was a blend of “old Morocco” and very comfortable. We were given bottled water each day in our room, very comfortable bed and linens, and, of course, bathrobes. Slippers were the traditional Fez slippers. I think it is an acquired taste to wear them however. Oh, and even better, was that you could fill up a huge basket with dirty clothes and, for a small fee, they were washed and returned the same day. Since we were travelling for 3 months, being able to get all of our clothes washed for a reasonable price was heaven.

This is a great place to stay and would be a reason to return to Fez. 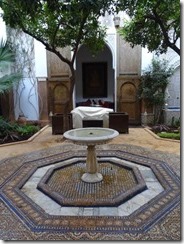 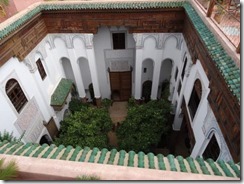 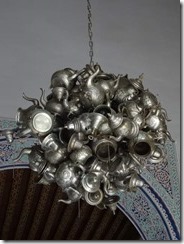