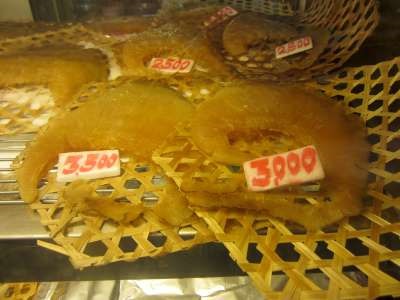 Bangkok is a vibrant city that is filled with lots of interesting foods. Wherever we are, we like to try lots of local foods. Tom is more adventurous than Joyce, although she tries more things than  she used to do—even if she still bulks at chilies. After all, life is too short to have a burning mouth.

But what better way to try a lot of different foods than on a food tour. Not only do we get to see and learn about a particular neighborhood. we also get explanations about some of the local foods. In Bangkok, we took two food tours with Bangkok Food Tours (www.bangkokfoodtours.com).

Yaowarat (Chinatown) Night Foodie Walking Tour, where we visited some of the neighborhood’s religious and cultural sights, learned about its customs and had tastes of foods from everyplace from low-cost stalls to high-end restaurants. Sights included the Triamet Temple (home of the 3.5-meter tall, five-tom solid gold Buddha), China Gate and the Ginza-like, neon-lit Yaowarat Road. Most of the evening, however, was devoted to tasting, rather than to sightseeing. Tastes included four different types of dim sum (especially shrimp shumai with pandan (also known as a screw pine, which is green and often used in cooking), a crab stick wrapped in pork and seaweed, and shrimp and scallop in curry) at Canton House, three types of Chinese buns (barbecued pork and pork with egg were our favorites) and desserts of black sesame and crushed peanut fried in a tapioca flour crust and durian ice cream. Yes, durian. If you have travelled to Asia, you will recognize it by its strong, potent smell. The taste is milder, but it is still an acquired taste. As a footnotes, most taxis and hotels forbid people from bringing durian into their cars and establishments due to the strong smell.  Trust me, if you have smelled it, you will know it.

We also tried some more spicy and challenging dishes. There was, for example, rice noodles in peppery soup with pig entrails, duck cheeks and Tom’s personal favorite, spicy lime soup with calamari at the amazing and immensely popular T&K seafood, where people will wait for a hour in block-long lanes. Shark fins were also available for purchase. Overall, it was a very fun evening and an opportunity to try many types of food we would have never otherwise ordered. 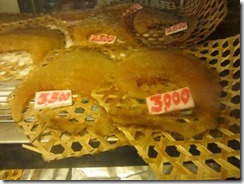 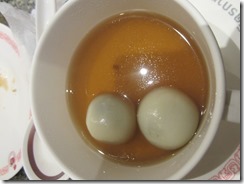 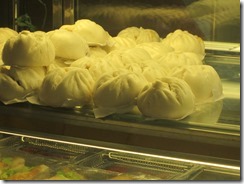 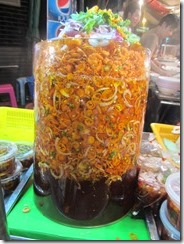 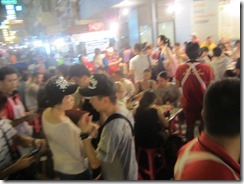 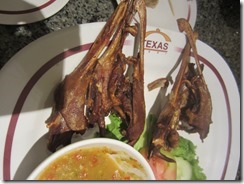 Historic Bangkok Food Tasting and Culture Tour, provided an opportunity to learn about and taste our way through this 100-year-old transportation and shipping center of the city. Its role as a transportation hub (one of the largest harbors and the first street in the city) brought Thai, Chinese, Indians, Muslims and even a few westerners together into a melting pot of culture and food. Although the neighborhood currently houses banks and corporate headquarters (especially along Silam Road) and high-end boutiques, antique stores and jewelry–particularly silver shops, it still maintains many of its oldest restaurants. These include the 70-year old "Muslim" restaurant (yes, that is its name, although it does incorporate Thai elements into many of its dishes) and the 60-year-old Banlee Bakery. Also newer institutions, like Kalpapruek. After stops at all types of stands and restaurants to learn about local specialties, we tasted about a dozen different dishes from stalls, to plastic table joints to upscale restaurants. Tastes included papaya salad, lime soup with fish and pork balls and fried pork belly, chicken curry with onion, fried catfish with green mango sauce, stir-fry chicken with holy basil, pandan egg custard buns and coconut sorbet. Not surprisingly, Tom’s favorites tended to lean to the spicy side (and the irresistible pandan egg custard bun). Joyce prefered the non-spicy. Another excellent tour on which we were lucky enough to have Lucy, the same guide we had on Saturday night.

We also ate at multiple restaurants in the Sukhumvit Neighborhood where we stayed. Restaurants are more touristy than authentic and many cater to tourists, such as with mini-floor shows. And yes, we even saw a butterball turkey dinner for Thanksgiving…although we didn’t partake. Our three neighborhood restaurants were:

While it is not food related, we did also see some unusual bars housed in vehicles, serving cocktails. 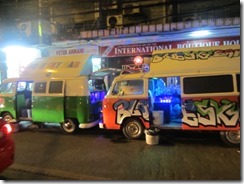 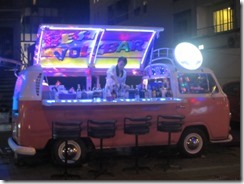