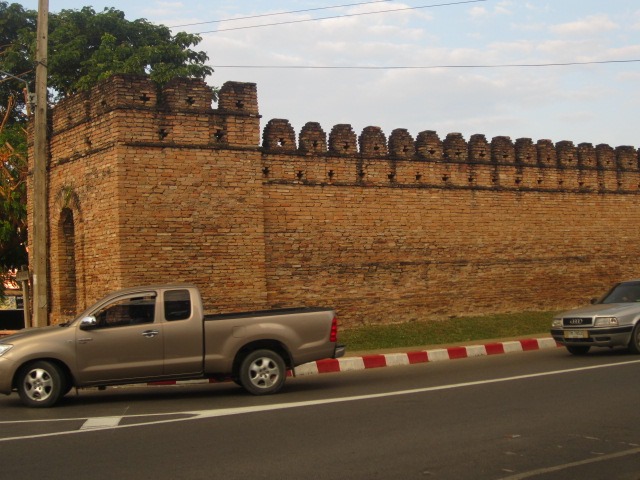 Although a visit to any new city certainly entails a tour of the sights, our primary objective is walking cities to get a feel for the town’s vibe. Chiang Mai’s Old City region is small and can easily be covered by walking in a day or day and a half. Two days if you stretch it. The city’s “official” tourist sites are pretty limited; there are the city walls, three primary Wats (plus an almost infinite number of smaller ones), an art museum, the night bazaar and a number of smaller Wats.

While Chiang Mai has a relaxed, causal small city feel, it’s also very cosmopolitan. It is a young and progressive city that appears to be not only tolerant of, but to welcome diversity. It is loaded with Westerners, including a number of ex-pats who tell us that they love living there. And why not? It is very inexpensive and friendly. (Note to my brother David…and they have inexpensive Heineken’s)

The Old City is based on a loose grid, surrounded by a lovely reconstructed moat with remnants of the city walled gates. Interspersed among the major roads are a maze of small alleys (Sois) that are fun to walk and often yield unexpected surprises. Casual walks provide opportunities to browse colorful craft shops and contemporary clothing stores. No matter where you go, you are likely to find restaurants and stalls at which you can grab a bite and bars at which you can take a break from the demanding job of sightseeing.

But even when you’re not looking for Wats, they will find you. Wats, after all, are everywhere. Many are sufficiently attractive or intriguing that you just have to look in. One such place was Wat Jetlin, with its colorful lights, labyrinth and bronze gongs which, whenever rung, prompts howls from a local dog. 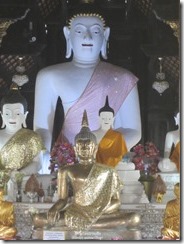 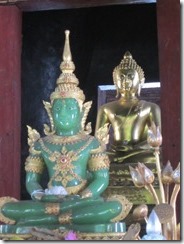 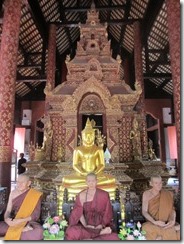 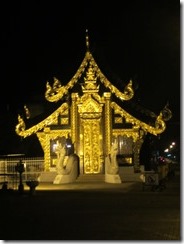 Not all of the central city’s sights are dedicated to history and culture.